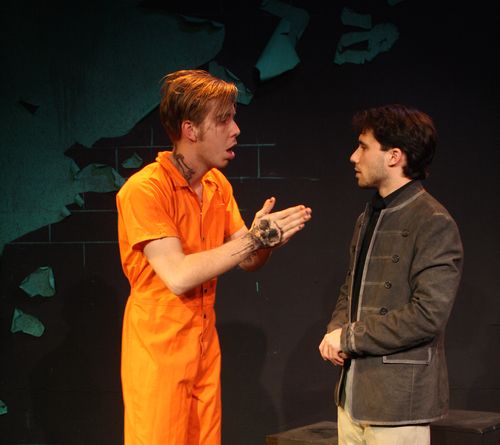 Pepperdine students are bringing the Shakespeare classic Hamlet to life this weekend in a unique interpretation.

Thomas-Visgar created the concept a year and a half ago for his senior directing project. He decided to direct the classic as a two-person play after having “seen Alan Cummings one man version of Macbeth in Scotland.”

Kovalenko and Nicandros have both been performing Shakespeare for almost a decade and explained that seeing Shakespeare is different than just reading the play.

Hamlet follows the story of the prince of Denmark, Hamlet, whose father has died. Hamlet soon learns that his father’s death was not an accident and it was his uncle, Claudius, who killed him. He is overwrought with revenge and the story follows his plan of retaliation against his uncle.

“I do think it’s the greatest work in the English language… and it’s exciting: imaginary sword fights, wrestling, there’s a toilet, and tattoos,” Kovalenko said.

The play will be performed April 10-12 at 7:30 PM in the black box theater located in the Pendleton Learning Center room 112.