Hall of Fame Banquet is a feast fit for sports phenoms 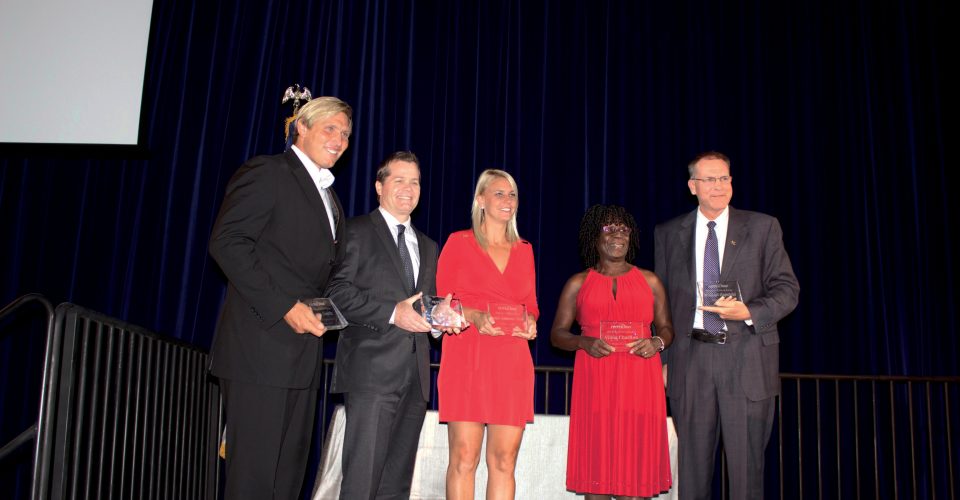 Four former Pepperdine athletes and one former sports administrator were inducted into the Pepperdine Athletics Hall of Fame on Sunday, Oct. 15.

The ceremony, which took place in Firestone Fieldhouse, had a regal ambiance with an acoustic guitar playing in the background, tables decorated with dark blue table cloths and flower arrangements. It was a feast fit for Waves royalty.

This tradition allows for Pepperdine coaches, administrators and student athletes to earn acclaim for maintaining a high degree of excellence on and off the field.

The Pepperdine Athletics Hall of Fame now includes 125 individuals who have made significant marks on Pepperdine athletics. In addition to these 125, 14 teams have been revered, along with a 10 distinguished Special Achievement Award recipients.

“We take a look at the whole picture,” Assistant Director of Athletics – Communication, Roger Horne said. “[We ask] what did they do at Pepperdine? What did they do further on in life, playing professional sports?”

Charlton, awarded an Order of Distinction, Officer Class, for her service to the nation in education and sport by the Jamaican government, was one of the first women to receive an athletic scholarship at Pepperdine without the school even having a team in her sport. She competed at three Olympic Games during and after her collegiate career, then spent decades as a track official and university lecturer.

Charlton has written or contributed to two books, serves as President of the Olympians Association of Jamaica and was nominated as the top female athlete in California by the Amateur Athletic Union.

Faries, one of the earliest Waves to earn All-American status, was named to the All-West Coast Conference first team as a sophomore and senior. He made the all-tournament team at the 1985 National Collegiate Athletic Association West I Regional and was named Pepperdine Athletics’ Scholar-Athlete of the Year in 1985.

Faries was named Most Valuable Player of the 1986 NCAA Central Regional and represented Pepperdine in more games than any other student athlete. Lastly, he played in Major League Baseball with the San Diego Padres and San Francisco Giants for parts of four seasons (1990-1993).

Lawrence, one of the two Women’s Tennis players in Pepperdine’s history to earn All-American honors all four seasons, was the most recent to have achieved this status. She received All-WCC first team doubles honors in 1997, 1998, and 1999 and won the doubles title at the 1997 Riviera All-American Championships with her partner Zsofia Csapo. Lawrence had end-of-season national Intercollegiate Tennis Association rankings of 25th, 30th, and 43rd in 1999, 1998, and 1996 for singles.

She helped Pepperdine win four WCC Tournament titles and three appearances in the NCAA Round of 16, and continues to play tennis with the San Francisco Olympic Club.

Smith, Pepperdine’s only four-time Olympian, was a four-time All-American. He was one of the top American scorers in the 2004 Olympics, netting nice goals despite being the team’s youngest player. Smith made the All-Mountain Pacific Sports Federation first team all four seasons and led the Waves in scoring in 2002, 2003, and 2005.

This phenom water polo player helped the Waves post final national rankings of fifth, third, fifth, and sixth during his time at Pepperdine, and won gold medals with the U.S. at four Pan American Games (2003, 2007, 2011, and 2015).

Zapolski, an invaluable member of the Waves’ Athletics Department who helped promote and support multiple of Pepperdine’s greatest achievements, was named the university’s Sports Information Director in October of 1983, as only a junior in college. He served in a sports information capacity with an Athletes in Action basketball team during a summer tour of Eastern Europe, and became an Assistant Athletics Director in 1999.

In 2001, Zapolski became an Associate Athletics Director. He helped promote Pepperdine’s six NCAA Championship teams from 1985-1997, oversaw 134 athletes that earned All-American status during his 20 years of employment, and served as media coordinator when Pepperdine hosted the 1995 NCAA Division I Women’s Tennis Championships and the 2000 NCAA Collegiate Men’s Water Polo Championships.

Pepperdine’s first Hall of Fame Induction Ceremony was in 1980, with an inaugural class of 20 honorees.

According to Assistant Director of Athletics – Communication, Roger Horne, like each year preceding it, this year’s Hall of Fame Ceremony was created in attempt to recapture and honor Pepperdine’s past, to recognize its current contenders and to take bold steps toward cementing a prolific future in sports. 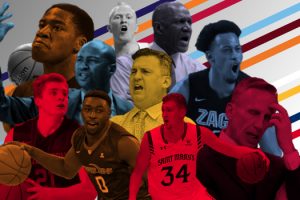