‘Grab Her by the Pussy:’ Student Creates Art for Feminism 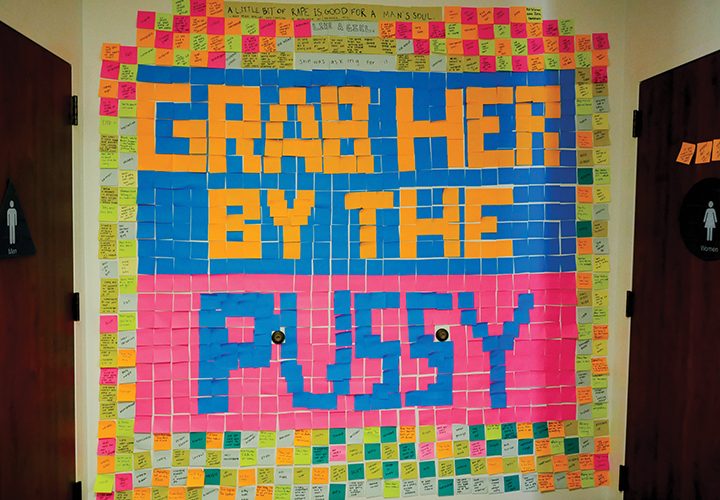 The project consisted of nothing more than Post-it notes and the voices of hundreds of women. Inspired by an argument with a friend regarding the gender wage gap, Folse said she felt the need to educate the Pepperdine community on the type of things that are said to 21st-century women. The exhibit is featured on the first floor of the CAC between the mens and women’s bathrooms.

“I had always wanted to say something, but I didn’t feel like I had a basis to go off of, and this was like my starting point,” Folse said. “A lot of disrespectful things are being said to and about women and not all of them are from a place of malevolence, but just ignorance.”

Folse collected statements for weeks from groups of friends, co-workers, friends of friends, guys and girls alike, and family members to hear what each of them had heard being said to or about the women in their lives.

The project itself is made of over 1,200 Post-it notes, on each of which is a phase or derogatory term that has been said to one of the one hundred plus women who contributed to the project, Folse said.

The post-it notes were arranged by color to spell out the phrase “Grab her by the pussy,” a statement made in 2005 by President Donald Trump in a leaked Hollywood Access video. Several of the quotes on the wall were said by celebrities, such as author Norman Mailer, who infamously declared that “A little bit of rape is good for a man’s soul.”

Folse called for the powerful figures acknowledge their statements.

“These are powerful people and they need to take responsibility for the words that they’re putting out into the world,” Folse said.“It’s not an exaggeration, the kinds of things that people are saying and how big of an issue it is.”

The original assignment was to develop an installation that would create an interesting, meaningful, worthwhile experience for the viewer, said Art Professor Ty Pownall, who teaches the class.

“[Mason] took that in a really interesting direction not just in the repetition of the materials, with the Post-it notes, but also in the repetition of sexual harassment, which she and other women in her life have experienced,” Pownall said. “It’s a powerful piece. I think it is provocative, rightfully so. I think that it is a subject that is not discussed in the way that it should be or could be, and yet it’s something that is a huge part of life as a woman.”

Folse said one can promote feminism and social justice simply by being vocal about things that are important to them, and sharing them often.

“I am with Mason in that I don’t think just not talking about it is going to help anything,” Pownall said. “There is a culture at Pepperdine to try to not make anyone uncomfortable.”

Professor of Art Gretchen Batcheller was also moved by Folse’s piece, even having never met Folse.

“That is art as activism. It has a pretty powerful voice and has this ability to move someone,” Batcheller said. “It touches on this type of art making where your audience becomes participant in the art piece, so its not just her putting up her ideas and voice, but she’s inviting the audience to first of all feel something and second of all to participate with it.”

Batcheller is refreshed to see a student be brave and take risks with their artwork.

“Our students also struggle with what is right and appropriate at a Christian institution, and they often will censor themselves before there’s an opportunity for someone else to censor them, and so I love it when our students exercise their voices, even when its raw,” Batcheller said. “I’m incredibly proud to see a student that was so bold with their voice.” 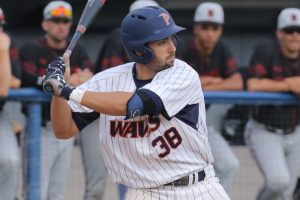 Photos courtesy of Pepperdine AthleticsJunior outfielder Matthew Kanfer has been making waves at Pepperdine since he arrived...
Copyright 2013 Jupiter Premium Magazine Theme
Back to top