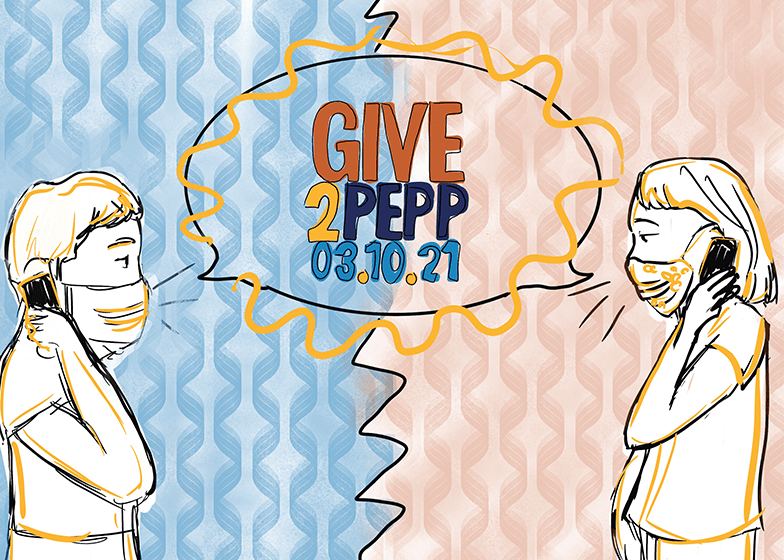 Pepperdine continues its tradition of Give2Pepp, a university-wide giving event that lasts 37 hours March 9 and 10. This year, however, Pepperdine Fund and Student Philanthropy Council pursue a different direction due to challenges students faced during COVID-19

Traditionally during Give2Pepp, Pepperdine encourages students and alumni to give back to departments in Pepperdine that impacted them. This year, the Pepperdine Fund is spreading the word about the event through peer-to-peer interaction and social media rather than sending emails to students.

“This is the place for the student voice to count,” Director of Pepperdine Fund Cynthia Ware said. “Because if hundreds of students give to one thing it sends a powerful message.”

Pepperdine encourages students who decide to give to Pepp to donate money to their “Pepperdine Passion,” one place or department at Pepperdine that influenced them, said senior Brandon Easley co-president of the SPC.

Because students can choose which department to donate to, Ware said, student donations act as a way for students to “vote” on what program left the most impact on them.

“We’re not going with them and saying ‘Hey we need X amount of money,'” Director of Seaver Associates Devon Ciby said. “For this project, we’re saying ‘What was your Pepperdine passion, what are you passionate about?'”

Early End of Last Year’s Give To Pepp

The SPC and Pepperdine Fund planned a variety of events to take place March 10-11, 2020. However, senior Charlotte Lang, co-president of the SPC said Pepperdine called off the events the day of due to COVID-19 closing the Malibu campus.

“We started it at 11 o’clock in the morning as we always do the day before for 37 hours,” Ware said. “And at 6:30 p.m., we got the notice that we were shutting it down. So of course those numbers look totally different than any other year because the ‘day of’ didn’t happen.”

The Student Philanthropy Council Is Spreading the Word

To spread the word about Give2Pepp, the SPC utilizes peer-to-peer communication. Members reach out to friends and club leaders, Easley said, and the SPC is looking into social media giveaways.

“We’re trying to, essentially, not only raise encouragement on our page for Give2Pepp, but also encourage people to use their own personal social media platforms to share it with their friends,” Easley said.

The SPC, Easley said, is encouraging students to give what they can.

“Not everybody is in an economic situation where they where they can give,” Easley said. “And normally we would use the ‘Donate $5 it’s just the cost of a cup of coffee,’ and those messages just aren’t working this year and they shouldn’t because people are in such different situations.”

In addition to peer-to-peer contact, the SPC is incentivizing students by hosting challenges, Lang said. One of the challenges is based on participation, where an anonymous donor will give money to a Pepperdine organization if 100% of that organization gives.

“It’s incentivized to give back to the same area in which they’re [the students] are already giving back to through their donation,” Lang said. “So it’s still just more money to help Pepperdine students so we thought those challenges are really exciting.”

Lang said sororities do not have a version of this challenge, but the SPC is looking for ways to include them.

Ciby said he primarily works with alumni fundraising and, during Give2Pepp, works to bring in gifts of over $1,000 from alumni. This year, Pepperdine is not soliciting money from students, parents, faculty or staff through email but is instead encouraging them to spread news about Give2Pepp through word of mouth. The University’s focus, this year, is on alumni.

The Pepperdine Fund’s primary goal is to keep students from feeling that it is necessary for them to give to the University, Ware said. The Give2Pepp fundraising aims to provide for students, rather than taking money from them.

“We are all heartbroken over the complexities of the college experience since the pandemic started,” Ware said “That being said, we’re in a unique conundrum because the students have been leading this event for the last couple of years.”

The Pepperdine Fund usually educates students about Give2Pepp at sporting events, Ware said, and would begin explaining the event to first-years during New Student Orientation. In addition to promotional materials, the fund would send out emails to the student body during the school year.

“We did not have those opportunities this year, that’s the very reason that we’re being careful not to solicit someone who really hasn’t had a chance to learn the why,” Ware said. “So if they get invited to be part of Give2Pepp, it will be because another student shared it with them.”

“I feel like Pepperdine has been perfectly content in taking our money without being truly incentivized to find a solution to online school,” wrote an anonymous junior.

SPC Sets Goals for This Year

Due to the nature of this year, Lang said the SPC has not set any firm goals for the upcoming Give2Pepp. Lang said she wants those who give to understand that their gifts both help Pepperdine programs and allow the University to increase its ranking.

“We’re just getting down to the gist of what Give2Pepp is about, why we give back to Pepperdine, and why we should be excited for that, and just having SPC members facilitate that while we are virtual,” Easley said.