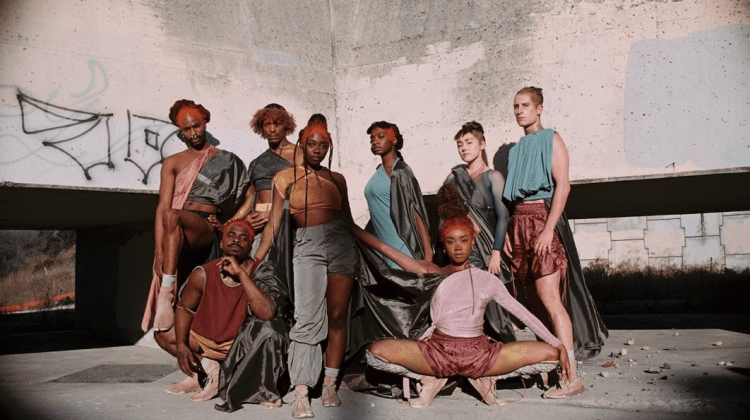 A still from Chris Emile’s “hbny (pronounced eh-boh-nee)” shows dancers posing together in costume. Emile’s short film is one of the three that will be screened as part of “Poussin Projected: A Screening of Contemporary Dance Films” at The Getty Center. Photo courtesy of Ciarra K. Walters

The Getty Villa in Malibu and The Getty Center in Los Angeles are set to host two cultural and artistic events this month.

The Getty Villa will host “The Assyrian, Not Syrian! Concert” March 19 at 3 p.m., while The Getty Center will host “Poussin Projected: A Screening of Contemporary Dance Films” March 26 at 3 p.m.

Getty’s mission is to advance and share “the world’s visual art and cultural heritage for the benefit of all,” according to its website, a goal these two events achieve.

“Getty is a cultural and philanthropic institution dedicated to the presentation, conservation, and interpretation of the world’s artistic legacy,” according to its website. “Getty pursues its mission in Los Angeles and throughout the world, serving both the general interested public and a wide range of professional communities in order to promote a vital civil society through an understanding of the visual arts.”

“The Assyrian, Not Syrian! Concert” will teach viewers about the history and culture of Assyrian immigrants using live music, storytelling and dance, wrote Cole Calhoun, Communications Lead for the J. Paul Getty Trust, in a March 7 email to the Graphic.

The concert is designed to complement “Assyria: Palace Art of Ancient Iraq,” an exhibit of Assyrian art on display in The Getty Villa until Sept. 5.

“Assyrian kings in the ninth to seventh centuries B.C. decorated their palaces with masterful relief sculptures that represent a high point of Mesopotamian art, both for their artistic quality and sophistication and for their vivid depictions of warfare, rituals, mythology, hunting, and other aspects of Assyrian court life,” the exhibition’s webpage reads.

“We educate and enlighten the community by holding high-quality artistic events and publishing creative works,” the Gilgamesh Art & Culture Foundation website reads. “We invite people from every cultural background to enjoy art and value artists. Our current emphasis is on empowering and representing the rich Middle Eastern heritage.”

Tickets to the concert are $20 and are available online.

“Poussin Projected: A Screening of Contemporary Dance Films” will feature three newly-commissioned dance films from local choreographers Chris Emile, Ana María Alvarez and Micaela Taylor. The screening will be followed by a discussion and Q&A session with the choreographers, as well as a reception with refreshments, Calhoun wrote.

“Their dynamic works complement the Getty Center exhibition Poussin and the Dance and respond to the French artist’s intricate depictions of dramatic scenes, richly colored textiles, enigmatic landscapes, and powerful bodies in motion that radiate celebration or despair,” Calhoun wrote.

The event’s accompanying exhibit, “Poussin and the Dance,” gives museum guests the chance to see selected works from Nicolas Poussin, the most influential French painter of the 17th century, according to the exhibit’s webpage.

“Portraying dancing nymphs and satyrs, he drew inspiration from ancient Greek and Roman sculpture but evolved a style all his own,” according to the exhibit’s website. “He envisioned dramatic—even violent—action with a choreographer’s eye. This exhibition considers Poussin’s dancing pictures through the dual lenses of art history and contemporary dance, establishing a dialogue between the old master’s work and new dance films by LA choreographers.”

The screening is free of charge, but advance reservations are required to attend.