Photo Courtesy of The Board

Reelstories is about to start rolling, and this year’s student film festival promises to be a cinematic spectacle. Students are taking to the screen with unique short films, but before they get the show on the road, here’s what’s going to go down.

Five show-stopping student films have been selected to be screened in the Adamson Plaza on Friday at 6 p.m. and everyone is invited to attend for free.

The films to look forward to are:

“The 6%” submitted by Brittany Tate

“How Far I Want to Go” submitted by David Hutchinson

“A Little Bit of Grace” submitted by Isabella Issa

This year, the organizers of Reelstories, junior Callaghan McDonough and senior Connyre Corbett, explained that they are implementing a series of changes meant to make it bigger, better and more student-focused than ever.

“This year our buzzword is ‘sophisticated spectacle,'” McDonough said. “We’re really hoping to emphasize not only the classy aspects of it, but we want it to be a big shebang, not only focusing on the artistic side with the student films, but also having a big, fun student event.”

Now in its seventh year, the festival plans to remove the feature film portion of the festival and show only student films.

“This year we’re really trying to put all of our energy and focus into the student aspect of [Reelstories],” Corbett said. “The changes that we make this year are going to be really student positive. This year we are only showing student films, which allows us to spend more time on them.”

This shift is meant to reflect the status of the film programs at Pepperdine.

“The quality of the film programs at Pepperdine is just going up, and up so this is a really exciting change,” Corbett said.

Some of the filmmakers were able to shed some light about the upcoming show.

“I set out to make something inspirational and interesting,” said Turner. “In short, it’s about a guy who’s trying to find a treasure, which is both a physical treasure and a treasure that will bring him inner peace and happiness. That’s what ‘Halcyon’ means. It’s an adjective that means calm, tranquility, peace, but also wealth or gold.”

Turner said he is most looking forward to seeing the other submissions at the upcoming festival.

“You have to love consuming that art more than making it, so I’m excited to see other people’s movies,” Turner said.

“It’s about two friends, a guy and a girl, Eli and Grace, and shows their progression from babies to adulthood. Eli is deaf, so the film is in sign language with subtitles in English,” Issa said.

Issa said she looks forward to the festival so she can share her work.

“I’m excited that people get to see something you work so hard on and watch people see that completed project and how they react to it,” Issa said. “Just hoping they take away the intended meaning of how Grace showed Eli so much grace. People have so much judgment toward the hearing impaired and to treat everyone the same is not really a message we always see in the media, and I hope they see that in the film.”

The lineup of films promises a diverse cinematic experience as the festivals focus sought thought-provoking films to challenge viewers. To get pumped for the upcoming showing, past films can be viewed on the Reelstories website.

Students can attend Reelstories Friday, Jan. 29, at 6 p.m. in the Plaza.


Tags:  A Little Bit of Grace Halcyon How Far I Want to Go Kelleen Mull Life and Arts pepperdine Reelstories REELSTORIES Film Festival Rubbish The 6% The Board 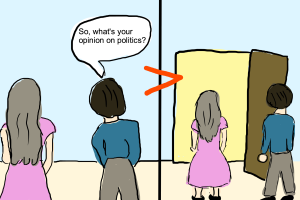 Art by Brooke Muschott "I wouldn't date a guy who didn't open the door for me," said 15-year-old me. I had been taught...
Copyright 2013 Jupiter Premium Magazine Theme
Back to top