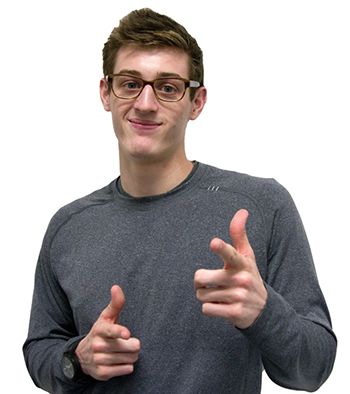 Many of you spent the last week or so welcoming new members “home” into your extended Greek families. Many of you were on the other end, getting thrown into the open arms of your brothers and sisters, some of whom whispered in your ear “you’re home now,” which made you worry that you’d never see your real, biological family again.

And still others of you were like me — Geed’s, as they say — watching from a distance, wondering what the heck was going on.

Sure, Greek life has its advantages: a wide-ranging network of friends and allies, cool T-shirts and formals. But even the most ardent fraternity supporters have to recognize its occasional downfalls. For people like me, those negatives far outweighed the positives.

But still, I hate being left out of things, so what’s the alternative for us Gosh Darned Independents?

No alternative existed … until now.

Being a senior, I worry about things like legacy now. That’s why I’m starting a fraternity. It’s called Beta Epsilon Nu, and we’re currently accepting applications.

Won’t Beta Epsilon Nu just be like all the other fraternities on campus? Great question, hypothetical reader, and the answer is no. Here’s why:

We will technically be a “secret society,” meaning everything we do is super sketchy, done in rooms with floor to ceiling light-consuming drapes and in cloaks. We will be needlessly paranoid, and members of our group may just disappear for weeks at a time to help bolster our public image.

Also, we’re only accepting five new members a year. Exactly. We’re exclusive. Our first class will have twenty-five of the brightest, most powerful students on this campus. How would this work? Math, that’s how.

Our dues would be $1,000 a year. Then, each member must pay $1,200 a month for rent, meaning we can afford to rent a house whose rent is roughly $32,000 a month. You know how big that house would be!?! Come on! This also solves multiple problems. Our fraternity would have an actual house like every other fraternity in America.

Mandatory weekly meetings? They will be mandatorily voluntary, and occur at 6 a.m. on Wednesdays, in the basement of our house, followed by an amazing breakfast and alternating surf/golf sessions. Are you sold yet?

Our rush process would be grueling. If you want something in life, then you have to take it. Being a member of Beta Epsilon Nu is a privilege, not a right. There will be interrogation sessions, and basically whatever you have to do to become a Navy SEAL.

If you like the status quo, by all means enjoy Pepperdine’s current Greek system. But if you’re like me, a “Geed,” and you yearn for more in life, such as secret societies that meet wearing cloaks in the basements of Malibu mansions, then consider joining Beta Epsilon Nu today.

And here’s the kicker: You can keep your real family. We’re ultimately just guys you hang out with sometimes when you’re bored.