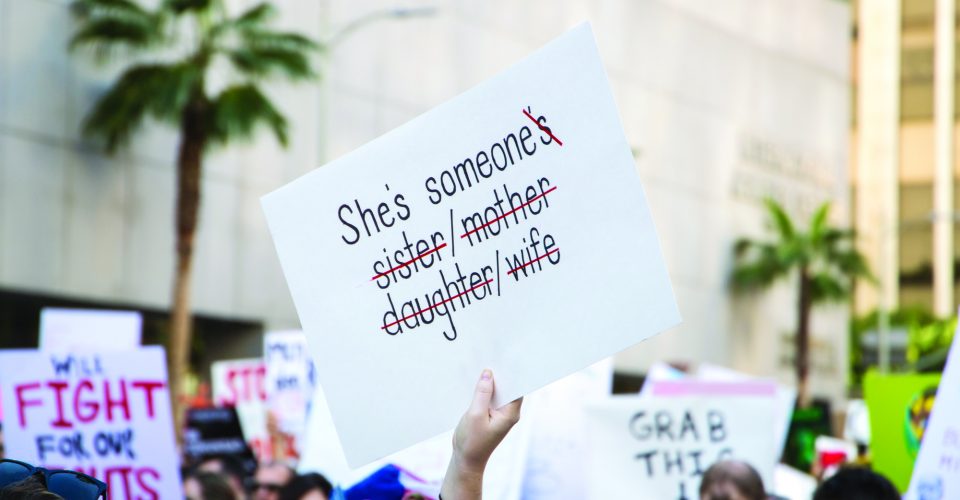 Art is a living part of history. When one thinks back to landmark social movements, art has always played a driving force in portraying the upheavals and shifts of society.

Because artistic mediums like film, poetry and paintings have the power to send impactful messages that resonate with audiences, artists use their work to express their truth, wrestle with social norms and bring about change.

For junior Gabrielle Norte, growing up on the Los Coyotes Reservation in Warner Springs, California meant being in a community centered around culture.

“You go to powwows, you do cultural gatherings, you do dances, you learn your tribal language,” Norte said. “It’s unique how culturally-focused [reservations] are.”

Behind the vibrant scenes of Native American traditions, Norte said life on reservations also means struggling to survive, as these secluded areas are often rife with poverty, substance abuse, suicide and violence.

“A lot of the issues that are happening on reservations are because of the way history has progressed and the way society has systematically shut Native people out,” Norte said.

As a member of The Los Coyotes Band of Cahuilla and Cupeño Indians, Norte’s experiences push her to make films that shed light on the concentrated disadvantages prevalent in Native communities.

For Norte, filmmaking combines art and activism into the perfect platform to advocate for Native American people.

“Film has the power to bring people together in ways that [other mediums] cannot,” Norte said. “That’s been really important to me because when you come from a marginalized community, you tell stories for the art but also the survival.” 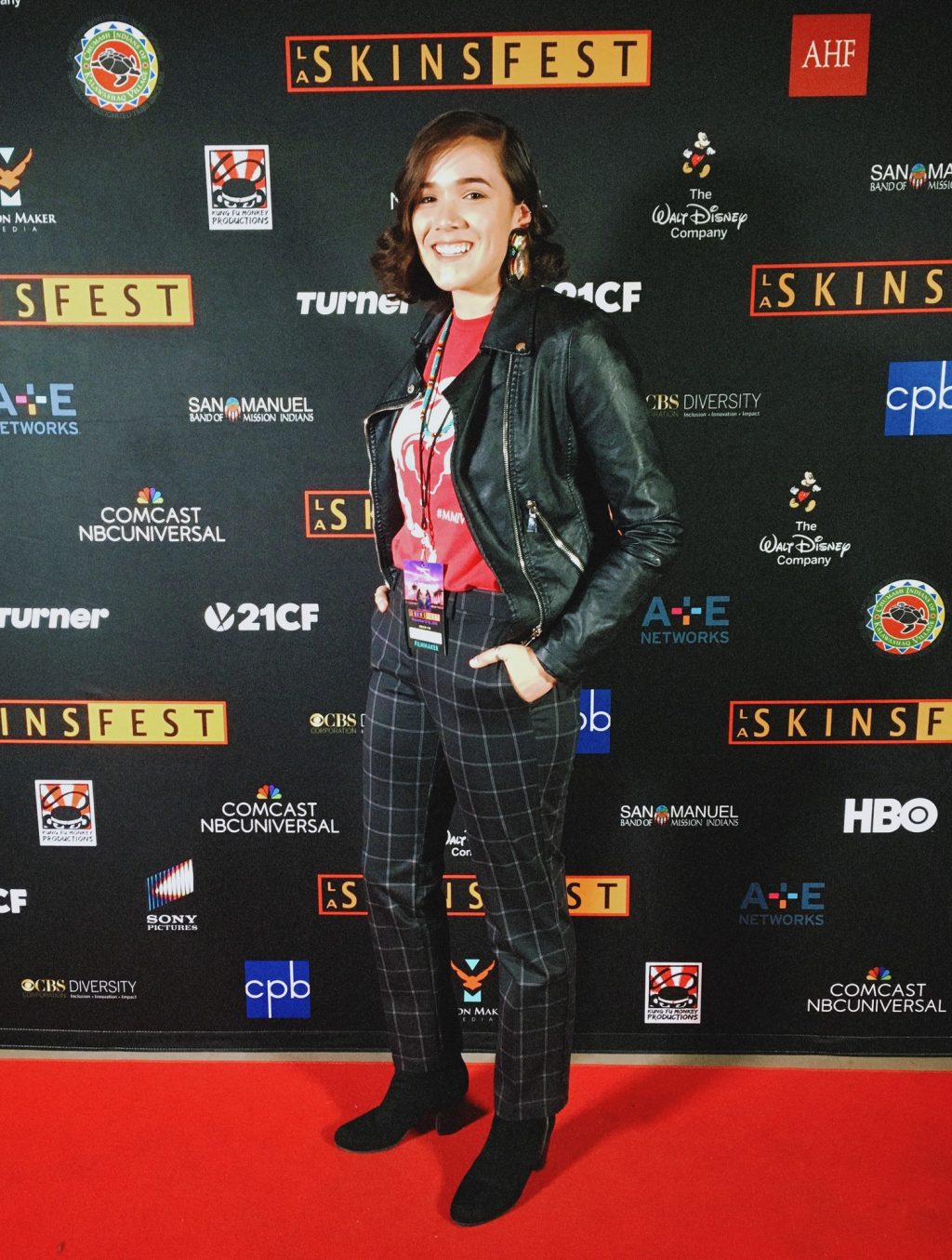 Norte’s most recent film, “People Watching,“ centers around the alarming number of indigenous women and girls who disappear or are murdered.

“It’s an epidemic in our communities,” Norte said. “’People Watching’ deals with that problem through the eyes of having a Native female lead who has a sister that goes missing.”

Norte said law enforcement agencies and news outlets often overlook deaths and disappearances of Native American women because of the harmful way indigenous groups have been portrayed and violently treated throughout history.

“If you look back on movies like Disney’s ‘Pocahontas,’ she’s a very sexualized character as a female, and it is a very vastly incorrect rendition of the story of Pocahontas,” Norte said. “It’s portrayals like that and portrayals throughout history of cowboys coming in and having their way with the Native women that ingrain these ideas that people can treat indigenous women how they want to.” 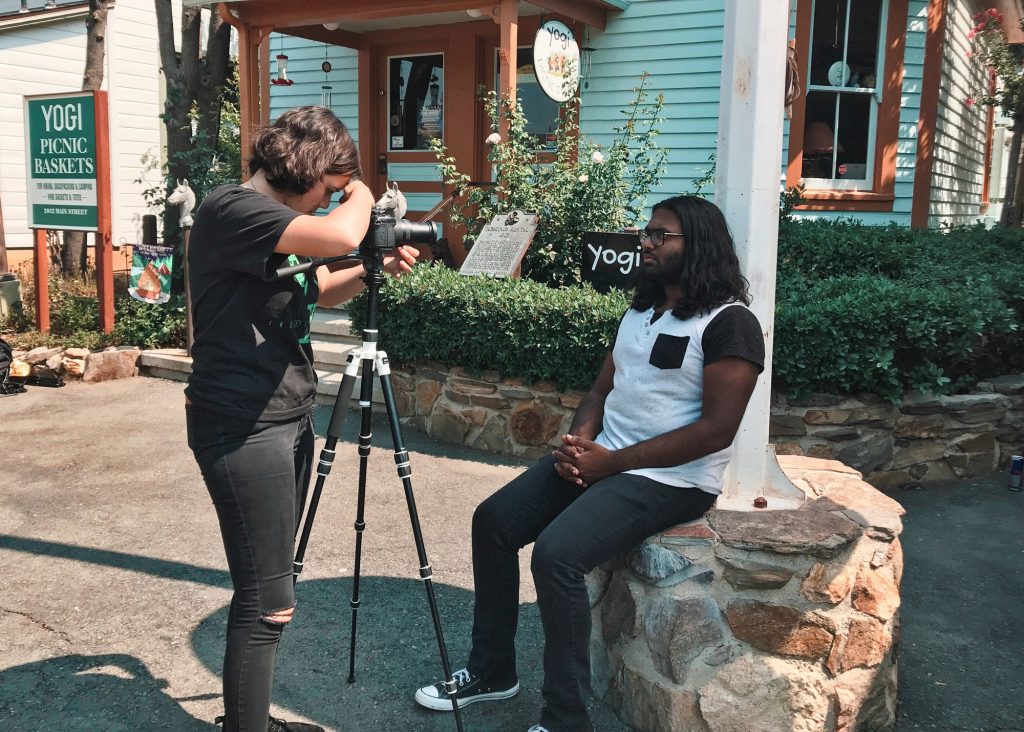 Norte is shooting a documentary that explores the lack of Native American representation in film history. She features Native filmmakers and actors who are working to change the depictions of indigenous groups in today’s industry.

For Norte, the road to social justice for indigenous groups begins with providing accurate and adequate media representation. In all projects she works on, she makes sure to cast Native actors in lead roles.

“Change starts in representation on screen and then trickles down into presence in society,” Norte said.

Hardy said the stereotypes and prejudices she faces as an African-American female inspire many of her poems.

“Being a Black woman is really hard in America, specifically a dark Black woman,” Hardy said. “I can’t hide my Blackness. Once [people] see that I’m Black, there’s just a whole lot of people who just attach stereotypes and things that they think that I should be or that they were taught that I should be.”

“A lot of the things I write are based on having that consistent feeling,” Hardy said. “There’s nothing else I can do besides write about it. I just feel like if I can try to make other people understand, then maybe it could be a way to communicate how detrimental it is for people to make assumptions based off stereotypes for things that they don’t understand.”

In an excerpt of her poem “The African (in America) Female,” Hardy calls out contemporary society for judging and restricting Black women:

Discriminated against for the color of our skin

And looked at as deplorable by all including our own kin.

It’s amusing because guess which group has the most degrees?

In this country, they’ll never really see who we be.

They stripped us of our heritage and made us obligated to blend into theirs.

They even try to make us ashamed of our hair

Are banned in schools in some states,

And I wonder why when it’s their ancestors who made this country our fate?”

For Hardy, poetry serves as a vehicle for her voice.

“I want to talk about my experience because some people really don’t understand it,” Hardy said. “A lot of the Black experience that I have is that people don’t like different. That just goes back to the issue of people not caring to understand others. That’s the whole entirety of every issue that ever happens in the world.”

Junior Carolina French said she believes that art provides a medium for artists to stand firm in their beliefs.

“Good art comes out of things that you’re passionate about,” French said. “Showcasing your passion behind your art adds a lot of depth to it.”

French is majoring in art and psychology at Pepperdine and focuses on gender roles and gender fluidity in her paintings.

French said her passion for these topics sparked out of realizing how much she disagreed with the restrictive and patriarchal ways she saw her Church of Christ congregation treat women in her hometown of Rogers, Arkansas.

French said painting pieces that explore the social constructs of gender allows her to reflect on her past experiences with gender roles and wrestle with her current views.

“Whenever you create art, you end up exposing more of your experiences than you expect to,” French said.

One of French’s pieces features two people dancing with each other. French said she painted the figures ambiguously to spread the idea that people should not be defined by what they can’t control. 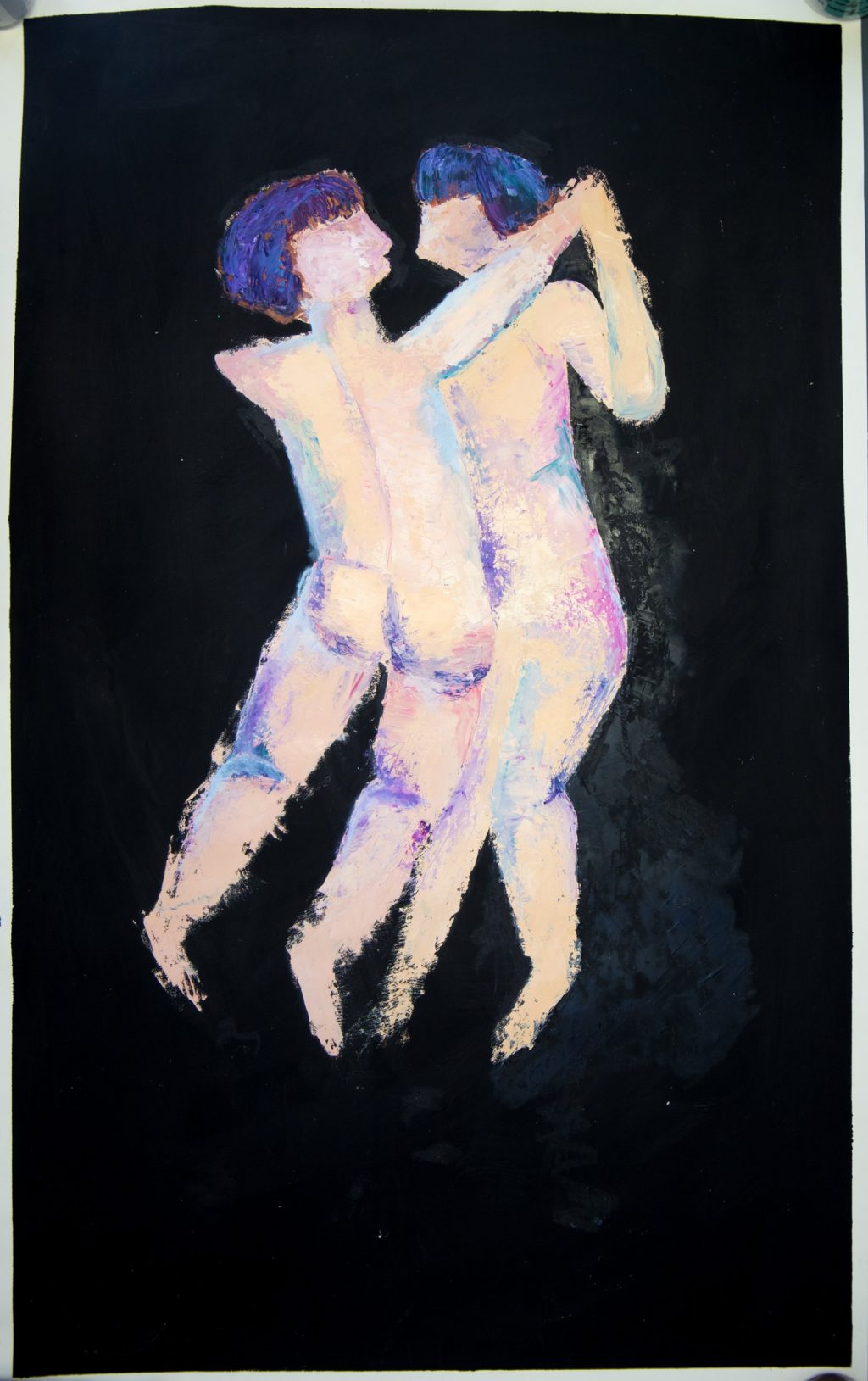 “[The figures] are relatively the same height, same shape, same haircuts,” French said. “I was intending them to look very similar because to me it doesn’t matter whether it’s a man or woman dancing. They’re just two people dancing. It’s about equality among all genders and preferences.”

Protest posters show the signs of the times

The Women’s March, which started in 2017 as a resistance movement to Donald Trump’s presidency, garnered global coverage because of the number of demonstrators and the creativity of the signs people carried.

Through witty slogans and powerful images, protest signs are becoming a prominent tool for visualizing attitudes. 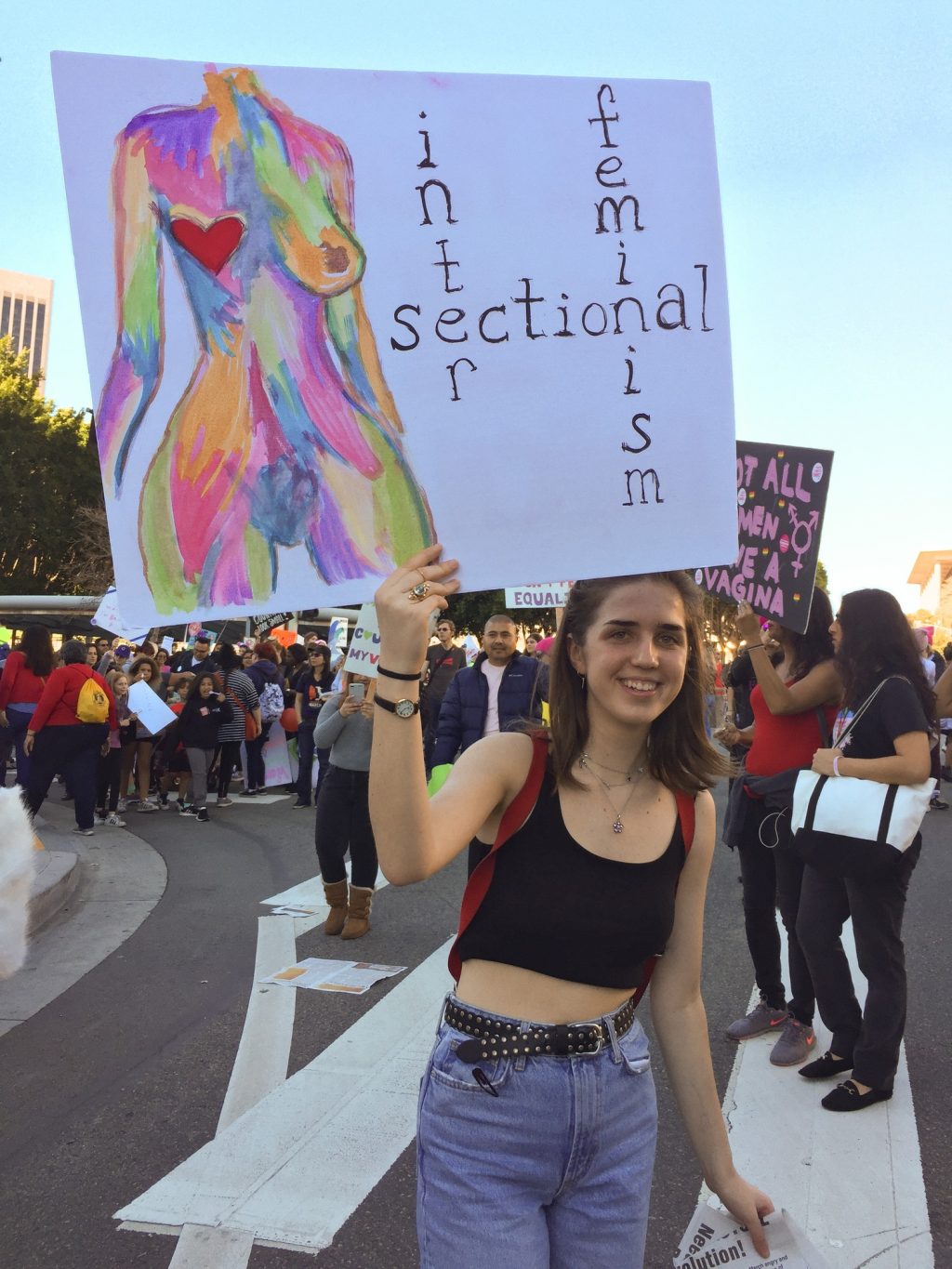 “There’s been a huge debate within the movement itself about when feminism becomes white supremacy or when women of color or trans women are not getting enough recognition,” Levin said. “Since it’s pretty important terminology right now, I was inspired to show that feminist women should cover all demographics that connect with the cause.”

Levin painted the woman on her sign with vibrant colors and one breast to emphasize that there is not just one type of feminist.

“I think female bodies are the most beautiful thing we can possibly create in art, so I wanted to integrate that into the sign,” Levin said. “I added all the colors on the body to make a statement about [feminism] touching all races and the one breast for all genders associated within the movement.”

Junior Mackenzie Mazen also attended the Women’s March in Los Angeles and painted a sign with the slogans “They tried to bury us, they didn’t know we were seeds” and “Can’t believe we still have to protest.” 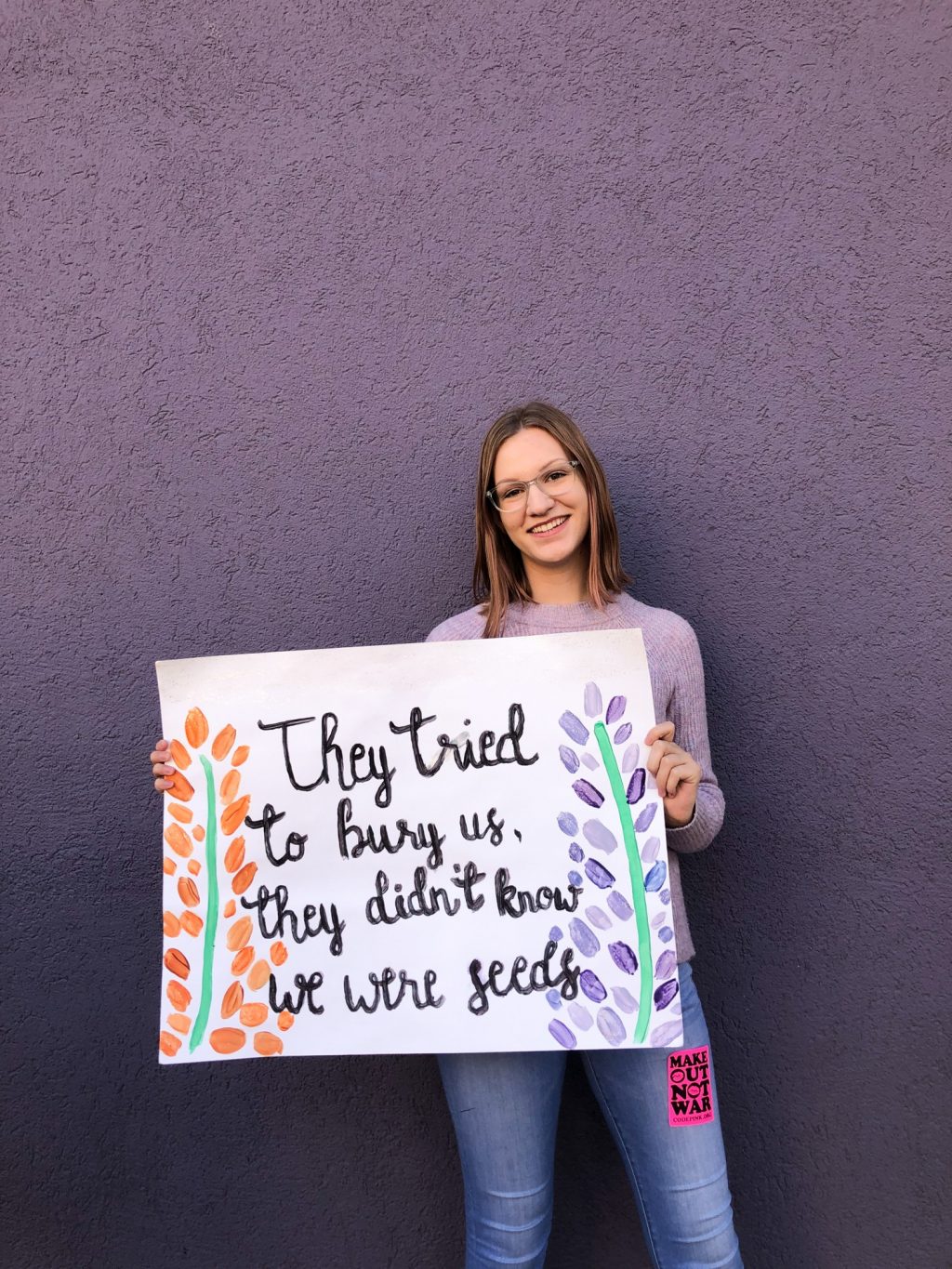 “The back of my sign says, ‘Can’t believe we have to protest’ because I think it’s ridiculous that it’s 2019 and women still don’t have equal rights and there’s still no Equal Rights Amendment in the United States,” Mazen said.

Mazen said she believes that protest signs are a powerful way for people to showcase their beliefs.

“No one’s signs look exactly alike,” Mazen said. “I think that’s the same with your life experiences and your voice. Everything that you say is based on your personal truth, so when you put that out there, it looks different than someone else’s. Artistically expressing that through signs is a very important thing, to take your truth and put it out in the world.” 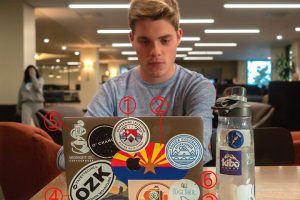