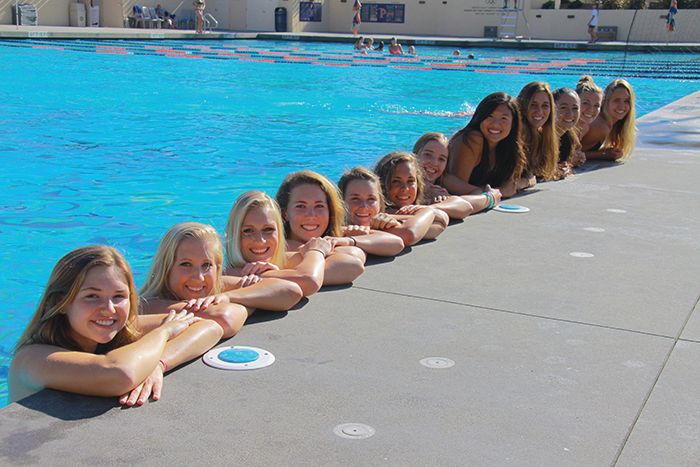 When it comes to college sports, being a freshman can often imply inexperience and sitting on the sidelines before stepping up for the big challenge.

But this certainly doesn’t apply to the women’s swim and dive team, where 17 out of the 35 athletes on the team are freshmen.

And these aren’t just any freshmen. With six seniors bound to graduate in May, the large freshman presence reveals Head Coach Nick Rodionoff’s long-term plan to carve the Waves into a swimming powerhouse in the future.

“We are really pleased with the diverse talent of this group. Our current student-athletes have worked really hard to re-establish a foundation, and these additions are really going to elevate our program to new heights, in all disciplines,” said Rodionoff in a press release.

“Not only are these young ladies talented swimmers and divers, but they all truly embody what it means to ‘compete with purpose.’ I’m excited to see what the next four years have in store for them.”

Megan Henley and Joie Eckhard, for instance, are two freshmen to keep an eye on over the next four years. Henley was selected to the All-State Academic Swim Team in her home state of Nevada, as well as performing in the Northern Division I All-Region championship in her junior year.

“It’s been really awesome having so many new girls on the team this year. We have 17 freshmen and 18 returners, so almost half our team is new,” said senior Emma Fitzsimmons.

“The new girls have contributed to a really high energy in the pool at practice, and the whole team seems excited to start the season off,” she said. “The freshmen fit right in with our team dynamic, and I am excited to see what they will bring to the table.”

Taylor Pinkerton is another promising freshman. Standing at only 5 feet 4 inches, the Illinois native won the 2013 GA Winter Regional State championship in the 1000 freestyle,

as well as competing twice at the Illinois Senior Championships and the YMCA National Long Course Championships.

Be it in the swimming pool or in the classroom, the freshmen on the swim team have a lot to be proud of.

Other than giving it 110 percent in practice, they have helped to maintain the team’s 3.2 GPA average. Being a freshman on the team “feels like being part of an immediate family,” said Eckhard.

Many of these freshmen can be seen in action when the Waves kick off their season at the La Mirada Invitational on Oct. 9 and 10.