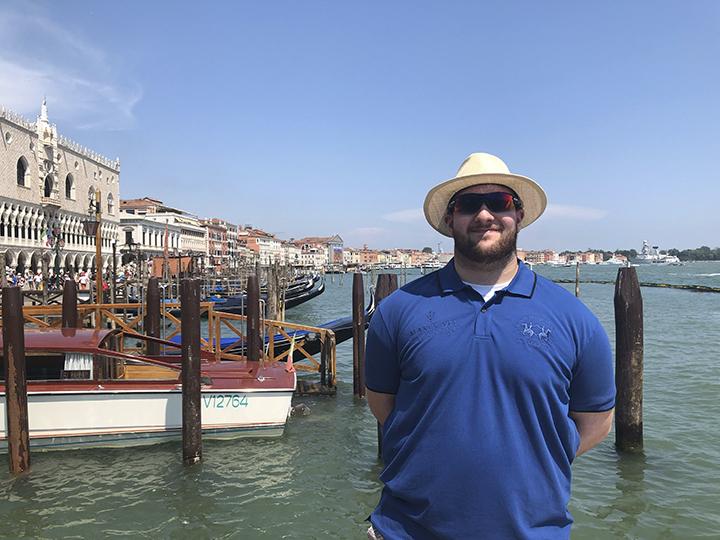 Junior transfer Jacob Piccuito poses in Venice, Italy, while on vacation in 2019. Piccuito said while he once thought he would never be a student at Pepperdine — he now loves being a Wave.

Transfer student Jacob Piccuito tore his ACL during a rugby match in the spring of 2019 at Pepperdine. At the time, he was a student at Occidental College and a member of its club team. Piccuito said after that experience, he never thought he would be a student at Pepperdine.

“I was like, ‘That was terrible, I never want to step foot on this campus again, I don’t want to go to the Zoey 101 university,’” Piccuito said.

Now, Piccuito is in his second semester of his junior year at Seaver College studying Business Administration, and he said he enjoys being a member of the Pepperdine community.

“After doing my research and kind of figuring stuff out, it was a great fit,” Piccuito said. “Once you get to know some of the people, it’s really, really welcoming, so it was hard to say no.”

Piccuito said he chose to transfer to Pepperdine because of its accelerated 5-year BS/MBA program. He has goals of working in the sports sector and his program allows him the space to take elective courses within the Sports Administration major to prepare for such a career.

“With the accelerated program, you can choose a concentration during your graduate year,” Piccuito said. “So I could do my undergrad in Business Admin, but do a speciality toward Entertainment, Media, and Sports Management, so I might try to get into that.”

Piccuito said he aspires to be a sports agent or a general manager for a professional team, preferably in football or basketball, but he hasn’t made any concrete choices yet. His current career goals are influenced by his lifelong love of sports.

“Growing up, I was kind of the awkward kid in class, and sports really just gave me a way out,” Piccuito said.

Originally from the Boston area, Piccuito said he has always been a fan of the city’s major professional teams across sports: the Boston Bruins, Boston Celtics and New England Patriots. Living in Southern California for a few years, however, has given him new teams to root for, like the LA Dodgers.

Piccuito said he wants to intern somewhere within the sports industry soon, but right now there aren’t many positions available in that sector.

“It’s kind of hard to find something in my field, because everything’s virtual,” Piccuito said. “People don’t want to do it. They think it’s not worth doing because nothing is in person; it’s all over the computer.”

While he likes being a student at Pepperdine, Piccuito said completing his first year at Seaver College remotely has had its challenges, too.

“I would have loved to go to orientation in person to meet a bunch of people,” Piccuito said. “It’s really difficult. I only know my roommate.”

Despite the physical disconnection between himself and his classmates, Piccuito said applying for a housing waiver and living on campus has helped him feel like a part of the community –– and the ocean views from his dorm in Drescher don’t hurt either.