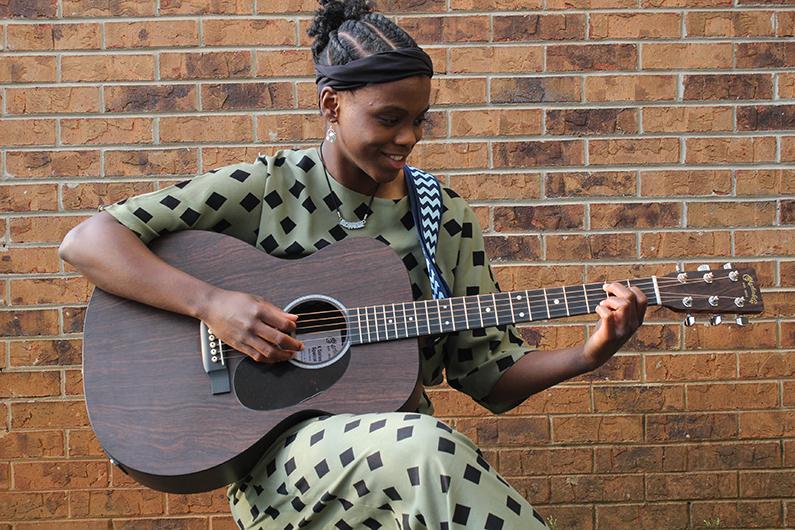 First-year musician Jackie Ferrari plays guitar in her Atlanta backyard in March. Ferrari said she makes hip-hop-inspired music that is inspired by her Christian faith.

First-year Jackie Ferrari is a triple threat: she writes, plays and produces her own original music, which can be found on Spotify.

The Advertising major lives in her hometown of Atlanta. After spending 8th through 12th grade at the Indian Springs School in Birmingham, Ala., Ferrari said she is prepared and excited to move to Malibu next fall, where she hopes to meet new people and be closer to the Los Angeles music scene.

“I would get so excited all the time, whenever I got a chance to make music, it just became a way for me to express myself and I’ve been at it ever since,” Ferrari said.

Ferrari said her faith is an important aspect of her songwriting process, and it is a reason she wanted to attend Pepperdine.

“I chose Pepperdine really just because of the faith aspect,” Ferrari said. “I don’t necessarily make Christian music; my songs are more about my life experiences, just about how I think and how I relate to the world, and how much faith plays into that.”

Ferrari said she describes her musical sound as a mixture of pop and hip-hop and cites rapper NF as her biggest musical influence. When concerts start happening in Los Angeles again, Ferrari said she hopes to see NF and Wande play live.

“[My sound] is like a mix of NF, Coldplay and Khalid,” Ferrari said. “I try to write in ways that other people can relate to.”

Ferrari released seven singles so far on Spotify and said she has many more songs to release in the coming months. She said she hopes to create a full-length album sometime in the next year or two.

“I can’t wait for people to hear them,” Ferrari said.

The advertising program appealed to Ferrari because while it combines subjects she’s interested in like psychology and marketing, she said it can help her promote her music career in the future.

Looking ahead, Ferrari plans to attend the Buenos Aires international program for the 2021-2022 academic year and said she hopes to improve her Spanish skills while learning more about Argentine culture.

“I thought it would be interesting to go to Buenos Aires instead of the other places because of the homestay,” Ferrari said. “Getting to meet the family I’m staying with — I’m really excited for that.”

Ferrari said she will continue to pursue music, with hopes of someday being able to share her music with live audiences and inspire others with her lyrics.

“It’s definitely going to take awhile to get to that point, but I plan to stick with it as long as possible,” Ferrari said.

Ferrari’s music is available for streaming on Spotify, Soundcloud and Youtube.