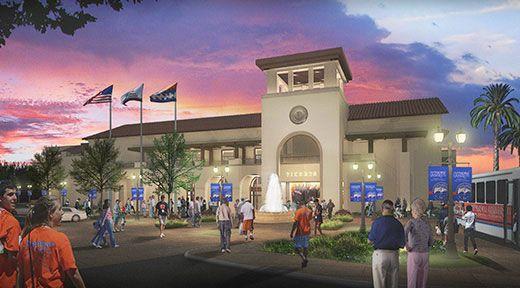 In May 2011, 900 alumni, friends, business and community leaders, faculty and staff gathered together with one common vision: changing lives. This event, the 35th annual Pepperdine Associates Dinner, was the public launch of the Campaign for Pepperdine. Fast forward two years later, and the campaign has raised approximately $403 million of its $450 million goal.

The campaign, the largest fundraising effort in the university’s history, is scheduled to continue through July 31, 2014. However, this is a flexible deadline. While the first priority is to raise the remaining $47 million, it would be more than ideal to raise excess funds.

During Waves Weekend (Oct. 18 – 20), attendees can partake in an avenue of giving by marking their moment. Similar to last year’s “Make Your Mark,” “Mark Your Moment” is an invitation to share a memory where something significant has happened or occurred at Pepperdine in one’s life. It can be an epiphany or spiritual insight, a class or professor that helped with one’s career choice or any sort of powerful idea or transforming moment that one desires to share with the public. Moments can be shared via the Mark Your Moment webpage or handwritten at Waves Weekend. Computers will also be on site for those who would rather share electronically.

Cynthia Ware, director of the Pepperdine Fund, says no monetary gift is too small. As a Christian university, Pepperdine encourages and accentuates the need to give. It is so inherent to Pepperdine’s culture that the principle is embedded in our mission statement: “Freely ye received, freely give” (Matthew 10:8). Whether it is donating pennies to the Pennies for Pepperdine freshman program or $5 per year for five years to the 2012 Senior Class Legacy, “give what would be perfect for you,” Ware said.

With considerable room for growth, Pepperdine’s alumni giving percentage is cause for concern. The Campaign for Pepperdine is a call to action. “[The campaign] is an opportunity to align resources with priorities,” said Keith Hinkle, senior vice president for advancement and public affairs.

In a time of economic crisis, Hinkle understands that university advancement needs to be responsive to the circumstances. In accordance with Ware, Hinkle said every gift matters. “I see our role [advancement] as telling [Pepperdine’s] story well and inviting people to be involved and invested in our future and in our students,” Hinkle said.

In an effort to connect donors’ passions with their strategic priorities, university advancement is seeking to ignite a passion for giving at Pepperdine. This “starts at Seaver,” Ware said. Ware hopes that increased giving from students will create a ripple effect for the university’s four other colleges and schools.

Although the Campaign for Pepperdine has only been in the public phase for two years, the campaign has been on University Advancement’s radar for nearly eight years. The campaign focuses on four aspirations that “advance learning, knowledge and scholarship; honor God and our heritage of faith; build community; and respect diversity and promote global understanding,” according to the Waves of Change summer 2013 newsletter.

In the last six months, the campaign has received two generous donations: a $60 million anonymous donation and an undisclosed amount to endow the university’s Center for the Arts from Lisa Smith Wengler.

A full budget breakdown of the projected spending of the funds can be found on the Campaign for Pepperdine’s webpage. The funds will be allocated to both student-centered priorities and campus and facility enhancements.

Upcoming Campaign for Pepperdine events include “Mark Your Moment” at Waves Weekend on Oct. 18-20, the Wave Classic Golf Tournament on Nov. 4 and an LA Live event featuring American author and poet Maya Angelou.

Giving is synonymous with Pepperdine’s distinctly Christian worldview. Hinkle says making a donation to the campaign allows students to make a difference and “be involved in something bigger than themselves.”

A new bill will make it more difficult for paparazzi to photograph the children of celebrities and public officials to make...
Copyright 2013 Jupiter Premium Magazine Theme
Back to top