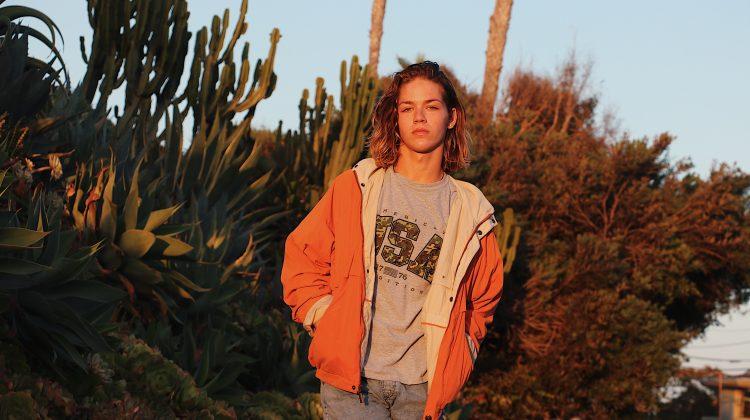 First-year Connor Ray poses for a photo by local California greenery at sunset in September 2021. This is one of his recent popular posts found on his public Instagram @cnnrry. Photo courtesy of Ali Fergusson

All of these are social media platforms are popular among younger generations, especially in the United States.

Social media influencers are often held on a high pedestal, which can lead to comparison issues among normal day-to-day users. To try and combat unrealistic portrayals of these influencers’ bodies, countries like Norway are beginning to implement laws that prohibit the use of editing on paid promotion posts, according to Screenshot.

First-years Kate Tomlinson and Connor Ray describe the power that comparison holds among influencers and other issues that are unseen by normal users.

“As I mature, I realize that I am wasting my life focusing on superficial things and I have missed out on amazing experiences, like going to the beach, because I did not think I was beautiful enough to go,” Tomlinson said. “I still struggle, and it’s hard to see people online and in-person living your dream, people who are prettier, skinnier, smarter and everything you feel you lack.”

Tomlinson said she believes social media harbors a feeling of comparison, because everyone is putting forward their best version of themselves.

“Social media has the ability to impact your self-esteem,” Tomlinson said. “When you see people at their best, you compare yourself for sure. Whether you feel someone is prettier or more accomplished, it does not matter; you still compare.”

People who have gained a strong following on a platform are categorized as “influencers” because they have the power or social standing to impact a group of individuals according to Influencer Marketing Hub.

Tomlinson, with a following of nearly 30,000 on Instagram does not consider herself an influencer because she did not gain her following because of her social media.

“I would not consider myself an influencer,” Tomlinson said. “I started out as an actress, and I mostly grew my following through that. I try not to do brand deals; it just seems pointless. If I am being honest, I hate the word ‘influencer’ because it’s such an easy thing to achieve.”

Tomlinson said she has taken progressive actions to escape falling into the mold of being an Instagram influencer.

“I have tried to avoid that label [influencer], even going so far as to drop my acting manager, who wanted me to be an influencer,” Tomlinson said.

Regardless of the following that a person has on social media, Ray — with a combined following of half a million on TikTok and Instagram — said comparison can affect everyone.

“I have to take breaks from social media, sometimes, like 3, 4 or 5-month-long breaks, because I get in these really bad places where I compare myself to even my fellow creators, and it just happens, and you can’t help it,” Ray said.

With the following that he has, Ray said he has to take extra precautions when posting photos to ensure the safety of himself, his friends and his family.

“Even if it’s a cute picture, like a sunset outside my house,” Ray said. “If I post that in front of my house someone can find it on Google Maps and figure out where I live and just like that your life is out there.”

With such a large following, Tomlinson said she feels the pressure caused by having an online following in her everyday life even when she is not posting.

“I definitely post my photos where I am in good lighting, with makeup, and I would probably not be so cautious if it was just my friends,” Tomlinson said. “Not only do I think it affects my posting, but I also think it affects my day-to-day life. I am almost always dressed up. Partly because I enjoy it, but the other half is because I feel the need to keep up this persona.”

Norway’s law is working to stop the altering of photos when there is a paid promotion involved in an effort to keep influencers and promoters honest, not just on social media but the law extends to magazines according to Screenshot.

Ray said he believes a law like this in the United States would just lead to influencers posting different types of photos that would not require any special editing.

“If everyone has to specify whether they altered their photos or whatnot, I feel like it would just lead to people not posting photos of themselves but photos of like situations and products,” Ray said.

No law is required to persuade influencers to stop editing photos because unrealistic bodies are not popular in today’s social media world, Ray said.

“Photoshop stuff is getting old, the giant butt is getting old,” Ray said. “It’s all just fake and obviously fake. It doesn’t even look good and no one thinks it’s cute.”

Ray said he has seen a shift in social media, moving away from perfectly edited and posed photos to a more natural and “real” depiction of people.

“People are posting themselves with their acne, without makeup and others are praising them in the comments, because they’re like, ‘Thank you, this is what I see right now in the mirror,’ it’s just more authentic,” Ray said.

Tomlinson said her struggles with insecurity on social media would not be eliminated if a law was created to persuade influencers away from editing their photos but instead by working on themselves.

“I am not pro-altering photos, but the government should have no say, and there is so much more that goes into why influencers look beautiful than just altering,” Tomlinson said. “The best thing people can do is learn to accept themselves and mature enough to realize that influencers and everyone else will always show the best of themselves.”