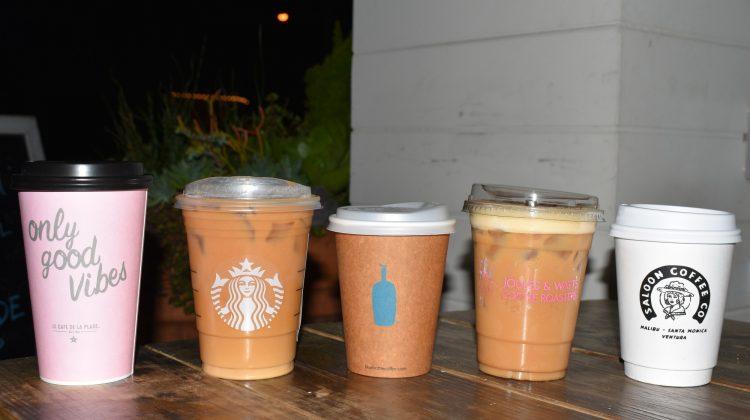 Five cups of coffee, one from each of the featured coffee shops are lined up next to each other on a picnic table in the Malibu Country Mart. The coffees were all shown in their respective cups with varying colors and sizes. Photos by Mary Elisabeth

Students utilize these shops and others to gather with friends, study or escape their busy schedules while indulging in delicious coffees, teas and pastries. Four Pepperdine favorites in the Malibu area include Saloon Coffee, Le Cafe De La Plage, Joules and Watts and Blue Bottle. First-year Enya Dinca said she frequents these shops and more with her friends.

“My friends and I love going to different coffee shops all over Malibu,” Dinca said. “There are so many different cafés in the Country Mart and around PCH to choose from.”

“Saloon Coffee is a hidden gem in the Santa Monica Mountains where the employees care deeply for their coffee,” Lucey said. “The beans are of the highest quality and the baristas receive specialized training that allows them to pour the best lattes.”

The owners Sophie and Bernard Benita moved from the south of France to the southern California coast to pursue their passions through Le Cafe De La Plage. Employee Taylor Williams, said the most popular and her personal favorite drink is a matcha with lavender and oat milk.

“Our cafe is super authentic,” Williams said. “The quality definitely gives you a French feel when you walk in.”

Joules and Watts Coffee first opened in the midst of the COVID-19 pandemic, with the intention of being a summer pop-up shop of gourmet ice cream, coffee and pastries. The owner, Maxwell Gualtieri, said he set out to make a brand that made people’s day through short and meaningful interactions, like getting a cup of coffee.

“The space revealed itself as an opportunity to workshop some coffee ideas,” Gualtieri said. “The best way to do that was a short 3 month pop-up, but it turned out to be not only sustainable as a business but meaningful to the community.”

Gualtieri said he emphasizes transparency as the most important parameter when buying coffee, and said the best way to ensure the coffee was traded fairly is to buy it straight from the growers.

“It’s green when I get it and since I’m a coffee roaster, I roast it until it turns into the color that we’re used to seeing at the shop and in the bags of coffee,” Gualtieri said.

Gualtieri gives the Pepperdine students he employs the opportunity to create their own signature lattes to express their creativity, he said. Senior Will Kemeny, one of the first employees and a Pepperdine student, brought a recipe from his time abroad.

“The owner gave some of the workers a chance to make a latte,” Kemeny said. “We had just gotten back from BA [Buenos Aires] and they have dulce de leche there and now it’s still on the menu.”

“I’m very excited for the transition,” Gualtieri said. “Everything is only going to get 200% better.”

Blue Bottle Coffee opened its Malibu location July 6, 2019, serving popular coffees like the New Orleans. It’s a concentrated cold brew that is not diluted with any water but instead, with the milk of your choice.

“Pepperdine and all the people from Pepperdine know that you come here for the New Orleans,” Barista Daniel Berwick said. “It’s sweet. It’s refreshing, it is the go-to drink for most Pepperdine students.”


According to Berwick, Blue Bottle specializes in pour-over coffees that are rich, without trying to cover up the coffee taste with sugars and flavors.

Regardless of where you decide to get your cup of Joe, first-year Owen Mirka believes that Malibu and its surrounding areas hold a lot of options.

“Pepperdine students love coffee as much as any other college students,” Mirka said. “Luckily there are plenty of places where you can find good coffee in Malibu.”