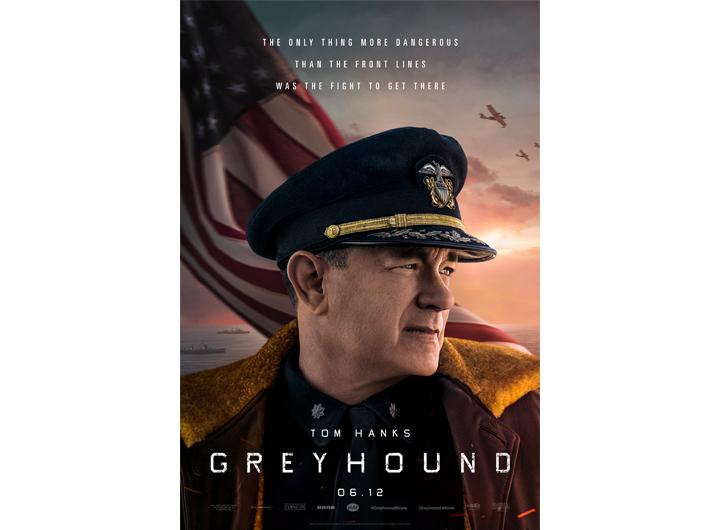 The “Greyhound” movie poster features Tom Hanks as Capt. Ernest Krause, the commander of a 37-ship convoy crossing the Atlantic Ocean. The action movie was released July 10 on Apple TV+.

“Greyhound” is based on C.S. Forester’s novel “The Good Shepherd.” The movie begins with the onset of World War II. Capt. Ernest Krause (Tom Hanks) leads a convoy of 37 Allied ships through the treacherous North Atlantic Ocean to avoid a group of German U-boats.

This is Hanks’ third screenplay after “Larry Crowne” and “That Thing You Do!” which are both romantic comedies. “Greyhound,” however, is an action film, which is different from Hanks’ previous screenplays.

Although he is still relatively new to writing scripts, Hanks skills are comparable to a professional screenwriter; he depicts the reality of war through actors’ characters and actions rather than bloody scenes, ultimately rendering the performances more natural and realistic.

“Greyhound” allows the audience to imagine it is experiencing a successful guard voyage during World War II in a different way than other war films. From the sound of bombs smashing the ships to the use of dialogue, viewers feel as though they are soldiers on duty.

Dialogue plays an essential role in “Greyhound.” Almost every second of this film is filled with dialogue, as the soldiers are constantly providing reports on the situation and reading messages from other ships.

In the first half-hour, the conversation seldom stops, creating a tense atmosphere that shows how diligently Krause works to communicate with soldiers.

Unlike “1917,” “Hacksaw Ridge” and many other war films, “Greyhound” does not spend much time explaining the historical background but directly utilizes several narrators to explain the group’s mission.

Even though Hanks put his heart in this film, the audience would have a better viewing experience if “Greyhound” was on the big screen. Exploding shots and massive waves that roll across the screen make this film more suited to theaters.

“Greyhound” is available on Apple TV+ now. Lovers of war films and fans of Hanks should not miss it. Although “Greyhound” is different from many films of the same genre, most war films never encourage people to engage in war but instead preach love and peace.