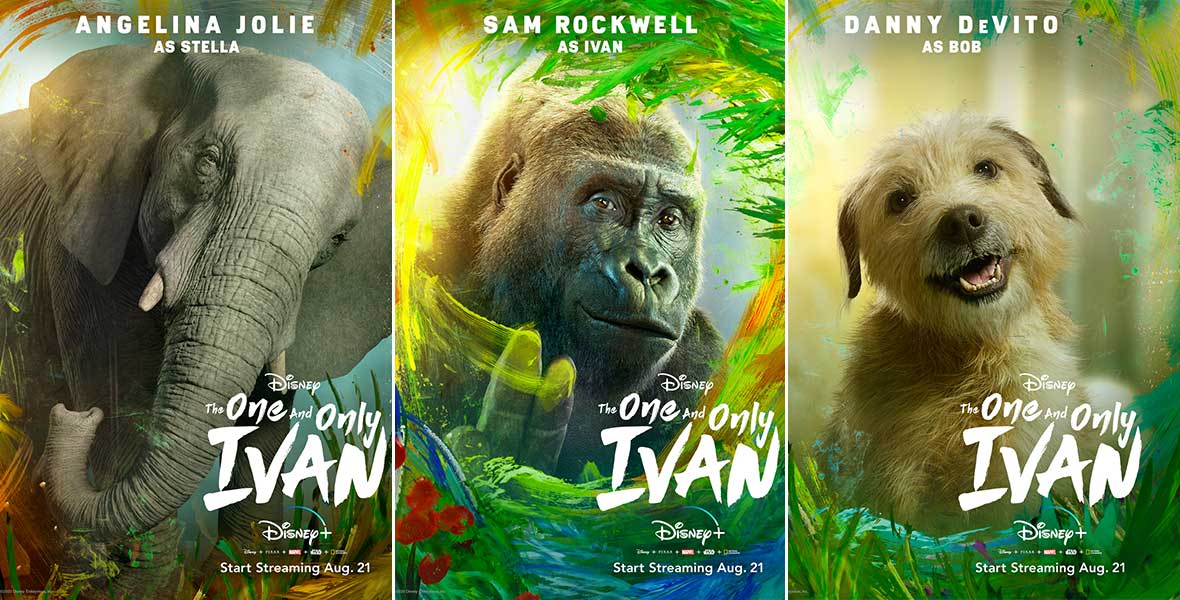 “The One and Only Ivan” shares a true, enlightening tale that highlights the empathic aspect of animals and is relevant to the growing understanding of the sentient nature of animals. The movie — based on the book by the same name by Katherine Applegate — tells the story of Ivan, a silverback gorilla, with a Disney twist.

Directed by Thea Sharrock, the film first became available for streaming on Disney+ on Aug 1. The movie’s all-star cast, including Sam Rockwell as the voice of Ivan, Danny DeVito as the voice of Bob, and Angelina Jolie as the voice of Stella, elevates the overall quality of the film.

Bob, a stray dog the gorilla takes in, proves to be Ivan’s best friend. Ivan’s many interactions with the other animals in the film highlight his gentle nature.

The real silverback gorilla the movie is based on, also named Ivan, was born in the Democratic Republic of the Congo in 1962. He was captured the same year, and at 2 years old, he was sold to private owners in the U.S. Ruben and Lois Johnston raised Ivan in a home with two boys of their own.

The film doesn’t depict this beginning and instead starts by showing a grown Ivan in a circus cage. A single owner of the circus replaces the Johnston family. It’s a movie that inspires viewers to step outside themselves and consider life from the perspective of a cage. It showcases the animals’ personalities through CGI effects, giving the animals visible emotion.

The film illustrates the beauty of childhood innocence, the power of a dream and the undeniable intelligence of these animals. Drawing on the childhood innocence theme, Ivan paints a forest-like setting on the glass wall of his circus display. He paints it because a little girl, Julia, told him she draws things as she wants them to be instead of as they are.

The intricate thought process of Ivan throughout the film, especially when he takes the advice of Julia, shows a Hollywood version of the emotional nature of animals. Animals comprehend a lot of human behavior, and their actions often emulate that understanding, which is emphasized in this scene.

The real Ivan grew up like a human child for 37 months before he became too rambunctious for his environment. He caused about $17,000 worth of damage to the Johnston’s home. They decided that he would be moved to a cage in the B&I shopping center in Tacoma, Wash.

The silverback gorilla then spent 27 years in a 14 x 14 cement cell without any kind of socialization with other animals. He never stepped foot outside or touched real grass for his entire residence at the shopping center.

Ivan’s gentle personality and sharp intellect inspired a nation to rally for better living conditions for the gorilla. Local animal welfare groups successfully campaigned for his release to a more suitable environment, which occurred in 1994 when he was placed at Woodland Park Zoo in Seattle.

The movie also depicts a nation that rallied behind Ivan’s release, which began with Julia pleading to the public via a news anchor at the circus.

The first zoo didn’t have adequate space for Ivan, so he was transferred permanently to Zoo Atlanta in Atlanta, Ga. Ivan spent the last 18 years of his life there — an environment that was far more conducive to his species — because release back into the wild was unrealistic due to how he grew up.

Many major news sources, including The New York Times, covered Ivan’s story. People Magazine also published a story on him, which helped further the campaign for his release. Headlines and protests that illustrated the nation-wide plea for him were shown in the film.

Today, animal rights activists try to prevent stories like this from ever occurring again. Animal welfare groups continue to pursue the best possible conditions for exotic animals in captivity. Animals, however, are still considered zoo attractions and confined in cages. The fight for their freedom is far from over.

The film ended with Ivan’s release to the zoo where Julia visited him with Ivan’s best friend, Bob, who became her pet dog. It ends on an uplifting and hopeful note, advocating for more humane treatment of animals.

The film is available to stream exclusively on Disney+. Its expected release date to other streaming services is unknown.