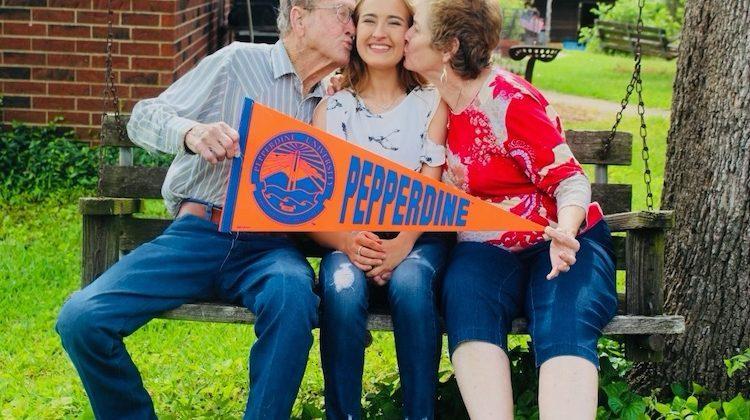 Photo courtesy of Mahala Bayless | Bayless’ grandparents kissed her on the cheek on their Eustace, Texas, ranch after she committed to Pepperdine in Spring 2018. Bayless chose to stay home with her grandparents during the Spring 2021 track season instead of competing.

There are some moments in life one can’t replicate. A baby’s first steps. An accident. A couple saying their wedding vows. A friend’s last breath.

Life is full of these moments — moments that shape a person’s experience and trajectory, that should bookend what it means to be alive. But sometimes, those moments are missing.

Three Seaver students shared moments of life they missed and how they moved forward, filling in the blanks with something other than memories.

“Just knowing that like, things don’t always work out as you expect them to or as you envisioned, but they’re usually working out in a way that’s greater, greater for the overall goal, the journey,” said Mahala Bayless, senior Integrated Marketing Communication major. “That once you start to step back and you get a little view of what’s been falling into place, you can start to really appreciate the things that didn’t work out.”

Bayless started at Pepperdine in Fall 2018, excited to finally attend the school her grandma had always told her about, she said. Bayless’ expectations for her four years would quickly shift away from the picture-perfect narrative her grandmother painted.

As a sprinter on the women’s track team, Bayless competed only one season with Pepperdine — Spring 2019. Spring 2020 was cut due to COVID-19 and Spring 2021 she encountered a choice: stay home in Mabank, Texas, or return to Malibu and maybe run — if COVID-19 didn’t cancel the season. She chose to stay.

First-year J. Doe — who is anonymous due to privacy relating to their gender identity — came to understand their identity during their junior year of high school. Starting in Fall 2020, they began introducing themselves as nonbinary, using the pronouns they/them. Doe said they slowly began to come out to their friends but didn’t choose to share with everyone — mostly because they didn’t have to.

“I just like, didn’t talk about it with coworkers,” Doe said, about staying closeted during their summer fast-food job. “It’s not a big deal, I’m here for three months, serving food to people that will never see me again, so it doesn’t really matter all that much.”

They didn’t come out to their parents either. Doe said their father went through their phone at one point and stumbled across a text message exchange in which Doe revealed they were bisexual, and that was enough for Doe’s father to never look through their phone again. Doe still hasn’t talked to their parents about their sexuality or gender identity. For now, they have chosen not to have that moment.

“There’s just — it’s a lot of these little moments,” Doe said, about their relationship with their parents. “I wish I could sit down with them and be like, ‘Hey, this is what you need to know about me, like I wish I didn’t I feel like I had to keep this from you.'”

But when it came to Pepperdine, Doe said they knew it would have to be different — they would have to come out to everyone, all the time. These were people they would know for four years, there was no getting around it. Their biggest concern: Finding the right moment.

“I think I struggle with creating those moments where I’m like, taking a second to introduce that because it doesn’t feel natural,” Doe said. “How do I bring this up, without it being inorganic, or weird, or horrible or like I’m expecting something of them?”

Junior Sports Medicine major Jasmine Williams came to Pepperdine as a swimmer on the women’s swim and dive team.

Her family had always been supportive of her swimming career, Williams said. While she wanted to swim in college, she didn’t do much when it came to recruiting or getting offers from schools — that was something she left to her dad because he had always been her biggest fan.

“Once I got to college, like, I really thanked him a lot, because I don’t think I could be where I am without him and like, his support,” Williams said. “I’m normally swimming for myself, but I’m also swimming for [my parents].”

After a rough first season, Williams and the team bonded together and got second in the 2021 Pacific Coast Swim and Dive Championship. Williams posted collegiate bests in both backstroke events in 2021, and was on an upward trajectory to have a great 2022 conference meet.

Through the fall, Williams and the team worked even harder to take the title. But a few days before they left, Williams got a call she wasn’t expecting. Her dad had died, and she had to choose: Go home to Sacramento, or go to the meet in Utah. She drove north.

Bayless said she never regretted staying home. Going to college in Malibu, she sacrificed precious time with her maternal grandparents and choosing to stay home allowed her to get that time back. Her grandfather died in November 2020 and her grandmother almost exactly a year later, November 2021.

“I realized that, even though I had been gone and I hadn’t been able to hang out with my friends and I hadn’t been running track, I got, you know, those months of my life with him that I would have never had otherwise,” Bayless said. “And like that is much more important to me than anything else because that’s irreplaceable — the moments we have, you know, living and loving what’s in front of us.”

Doe said coming out has gotten easier. On their first day of sociology class in Elkins fall semester, their professor asked students to sit on one side of the room if they were a man or a woman. Doe chose to sit on the floor in the aisle.

“That was the first time I can remember where I was in a position where I have to label myself in front of a whole group of people,” Doe said. “I didn’t have the opportunity to do something different.”

Looking back, Doe said it was their favorite memory from the class.

“Because it was like, this is one of those little ways of coming out to people that I do have the opportunity to have,” Doe said. “I am in control of the situation, I get to decide how this works.”

Pepperdine Swim and Dive won the PCSC championship this spring, the first time in program history.

While Williams wasn’t physically there, she said her team did everything they could to make sure she was included — from writing her name on their arms to calling her in between races so she could hype them up before getting in the water. Williams said it was this familial feeling and her team’s support that made missing this moment easier.

Williams said she finds hope in having next year to compete and knowing her team and family will be there to support her.

“A lack of a moment, I think there will be growth to be found,” Williams said. “Growth can be found in what was lost. How I will find that, I don’t know. But I know it’s there.”

Williams said she plans to continue swimming — both for herself and for her family.

“[My dad] always said, ‘You have so much that’s coming your way,'” Williams said. “And I know that, sadly, he won’t be here to see it. But I can still feel his presence with me. And I’m just like, OK, eventually, that moment will come that he was talking about and I just want to get there.”