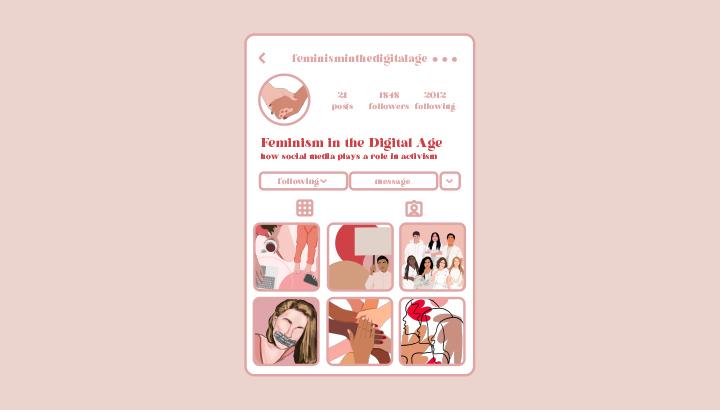 In today’s digital age, it is nearly impossible to talk about feminism without also discussing the role social media plays in activism.

These movements serve as a source of solidarity for both women and men who are survivors of sexual harassment and violence, and they have empowered many to go public with their stories. #MeToo has been tweeted more than 19 million times since 2017, when actress Alyssa Milano encouraged victims to share their stories on Twitter, according to the Pew Research Center.

“Women are coming forward, and they’re using … social media as a way to say, ‘This has also happened to me, and it’s not OK and I want to lend my voice to others,’” said Tanya Cooper, an assistant clinical professor of law and director of the Restoration and Justice Clinic at Pepperdine’s Caruso School of Law.

Cooper said online feminist movements expose the statistics of sexual violence. One in five women will be raped at some point in their lives, and in eight out of 10 cases, sexual assault victims know their attacker, according to the National Sexual Violence Resource Center.

“We’re putting a more public face on this problem that you can’t ignore,” Cooper said. “And it’s going to make it harder to sweep [it] under the rug or try to pretend that it never happened.”

“I didn’t want to be ignorant about something that was trending, so I did some research on [#MeToo] and found out what it was,” Silva-Garcia said. “And it was women empowering other women just to speak up and letting them know they weren’t alone.”

Silva-Garcia said she often shares feminist posts on her social media accounts, but some of her posts, especially those related to her stance on abortion, are met with demands to keep her voice quiet.

“When you’re not willing to listen to an opinion that’s different from yours, you can’t grow,” Silva-Garcia said.

“I’m seeing an increase in people’s awareness, but also … a decrease in willingness or ability to talk face-to-face about it because everybody’s afraid to say the wrong thing,” Stone Watt said.

Junior political science major Audrey Rhynerson uses Twitter to engage with social movements and said she recognizes the positive and negative aspects of interacting with activism in a digital space.

“Being able to listen and uplift messages from people around the world or around your community is really important and really powerful,” Rhynerson said. “Sometimes it’s hard because there are really negative people [online].”

Bryan Munguia, a senior integrated marketing communication major, said he thinks that while #MeToo began with good intentions, the traction it has gained is now bringing about more harm than good.

“Now, it’s a new extreme,” Munguia said. “Public forum is so appealing, and it’s fun to just tear each other apart. … It’s fighting fire with gasoline.”

Munguia said he believes that #MeToo contributes greatly to the prominence of ‘cancel culture,’ in which social media users feel a sense of heightened responsibility to hold everyone — classmates, coworkers and celebrities — accountable for alleged wrongdoings.

“I define [cancel culture] as a mob mentality and groupthink, largely influenced by leftist politics or people believing that they’re being progressive or woke,” Munguia said. “Their mission is to just obliterate the cyber personalities of different individuals for their own form of fulfillment.”

In 2018, 43% of American adults said they believed that the #MeToo movement has gone too far, according to an Ipsos/NPR poll of 1,006 people.

“False reporting happens; it’s also incredibly rare,” Cooper said. “By falsely accusing somebody, you can tarnish their reputation and their name and prevent them from getting jobs or positions of power and authority.”

In the #MeToo era, celebrities can exert control over the narrative surrounding sexual misconduct. Rhynerson said in the digital age, the public has heightened expectations of how celebrities should respond to sexual assault allegations.

“You have a responsibility whenever you have that big of a platform to do the right thing,” Rhynerson said.

Miaomiao Gao, a junior IMC major and an international student from Zhengzhou, China, said the main social media platform used in China for social movements is Weibo, which she described as a combination of Instagram and Facebook.

“There’s a trend when something happens — when a girl gets bullied, or there is inequality between a man and a woman — the Chinese stars will normally advocate [on Weibo] for feminism,” Gao said. “I will follow their post and try to consider the incident from their perspective, [or] from the victim’s perspective.”

Since coming to America, Gao said she notices a difference in how Americans engage with feminist movements, especially online.

“[In China], not a lot of people will go on the streets to advocate feminism,” Gao said. “In America, more people are doing it in real life, in practice. People [in China] don’t want to take that major responsibility by saying it out loud because in China, if you’re advocating for stuff that’s very outstanding, very big, very different from others, the government probably will take some actions to mute you.”

Using traditional social media platforms or participating in public demonstrations are not the only ways to join the feminist conversation. Years after experiencing a traumatic sexual assault as a child, senior MBA student Mackenzie Mazen started her own blog, where she posted her narrative titled “Me Too.”

Mazen said she found strength through going public with her story and has even been able to help others struggling with similar trauma.

“There’s nothing I can do to change the past, and so I’m very much in a growth mindset — how can I grow from this?” Mazen said. “I think blogging was that outlet for me to kind of grow and be resilient.”

Stone Watt recognized that some individuals may be unsure of how to have conversations with feminists or survivors of sexual violence. She advised college students to respect each other’s perspectives, recognizing that they may be drastically different.