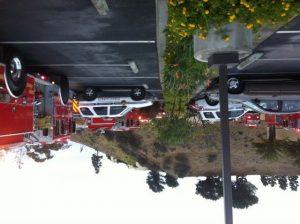 Firefighters and officers on the scene evacuated the building immediately upon arrival. They “responded to the scene and detected a light haze of smoke and burnt odor throughout the building,” DPS Deputy Robert McKelvy wrote in an email.

DPS Deputy Director Dawn Emrich confirmed that a failing air handling unit on the roof of the building was the source of the smoke. Inspection performed by the LA County Fire Department, DPS and Facility Services revealed that the motor bearing had failed causing it to cease and overheat.

“There was no active flame,” McKelvy said. The smoke and odor was “generated from friction of the part failure.”

The building was reopened at 7:51 a.m. allowing normal business operations to resume for those with 8 a.m. classes. The CCB doors were propped open to allow the burnt odor to exit the building.

Facility Services has ordered replacement parts. They expect the air-handling unit that partially serves Café Fresca on the second floor to be back in operation within a few days.

Sara Barton has been chosen as the new university chaplain. After months of searching and interviews, the announcement was made...
Copyright 2013 Jupiter Premium Magazine Theme
Back to top