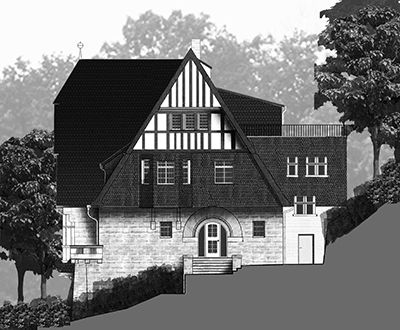 Pepperdine’s Moore Haus in Heidelberg, Germany, will undergo extensive renovations beginning in the summer of 2014. Head of the renovation fundraising campaign, Senior Advancement Officer Dawn Pettersen, said the project will upgrade infrastructure, such as plumbing and electric, redefine residential living and study spaces and expand accommodations for the visiting faculty family; all while preserving the historic facade of the building. The university has enacted a $1 million fundraising campaign to alleviate a portion of the total cost, which Pettersen estimated at $5 million.

“Through the renovation, the house will retain its homey atmosphere, while at the same time giving the students more options to gather, visit and study with each other,” Heidelberg Program Director Daniel Daugherty wrote in an email.

Daugherty said no students will be in Germany for the 2014 Summer Program, as April to August will be dedicated to the upgrade. Pettersen said the substantial changes to the house will redesign student spaces, but the most urgent improvements will address crucial infrastructure issues. The Moore Haus is more than 100 years old and needs to upgrade basic infrastructural issues to comply with 21st century city codes.

Student rooms and living areas will also be reconfigured to create a better traffic pattern throughout the building. Areas that had previously been shut off to students, such as the storage attic, will be altered for students’ academic and personal use. This will create a space for students to gather for weekly meetings, study sessions or lounging purposes.

Originally built as a residence, many of the renovations will change the flow of Haus to better fit student needs. Student living spaces will be situated entirely in the main part of the Haus, while the classic Moore Haus tower will be converted into the faculty family apartment, according to Pettersen. Reconstructing the tower for the faculty family will allow them more space and privacy and also open up their old apartment for student use. Pettersen said the sense of isolation students sometimes feel from living in the tower will be alleviated, as bedrooms will be located solely in the main part of the Haus.

“People living in the towers were sometimes, ‘Oh this is happening?’ They were left out at times,” junior Evelyn Aleman said. Aleman studied abroad in Heidelberg during the 2013-2014 academic year.

To replace the student bedrooms that are being lost in the tower, rooms are being added to the second and third floors. This change will ultimately grow the program’s size by four to six beds.

“It’s major. It’s not just a redesign or a redecorate, in any way shape or form,” Pettersen said. “The things that must happen in order for the house to stay open and running for the next year’s students will be done this summer, and then the fun [renovations] … will be done the following summer.”

One of those essential upgrades will be preserving the historic facade of the Haus. Pettersen said the city of Heidelberg does not allow the university to make any alterations to the street-facing front of the Haus, and efforts will be made to ensure its conservation. To further comply with city codes, the university had to purchase the forest behind the Moore Haus before beginning construction. The price of the forest is currently unavailable. The largest addition to the rear of the Haus will affect the second, third and fourth floors. It will allow for a larger and more functional second floor laundry room, redesigned third floor student bedrooms and bathrooms, and a large fourth floor outdoor terrace for recreation and study purposes.

When discussing the redesign of the student bedrooms, junior Carolyn Clark said there were changes that she believes would benefit the program. “You had to walk through my room to get to the other room,” Clark said. “That worked fine for my year because the dynamic between the girls that were in both rooms was good … but I can definitely see where it would be a problem with people staying up late and coming through.”

“The bathrooms were just old,” Clark said. “It wasn’t usually a problem that you wanted to take a shower and couldn’t, but it was just outdated and got dirty quickly.”

The university has created a Moore Haus Renovation Campaign webpage that allows anyone interested in supporting this project to donate. Additionally, the Alumni Office will host a Heidelberg alumni reunion event May 17 in Alpine Village, Calif., to present the Haus plans. Campus Construction and Planning Architect Ben Veenendaal will be present to share specific details of the blueprints and answer any questions.

“Sometime in the summer of 2016, we hope to be able to take a very large group of alumni, donors, friends, families … over to Heidelberg to celebrate the renovation,” Pettersen said. “At that time, we want to have raised all of the money necessary to have paid for the renovations.”

Final renovations will be completed after the students enrolled in the 2015 summer program have left Moore Haus.