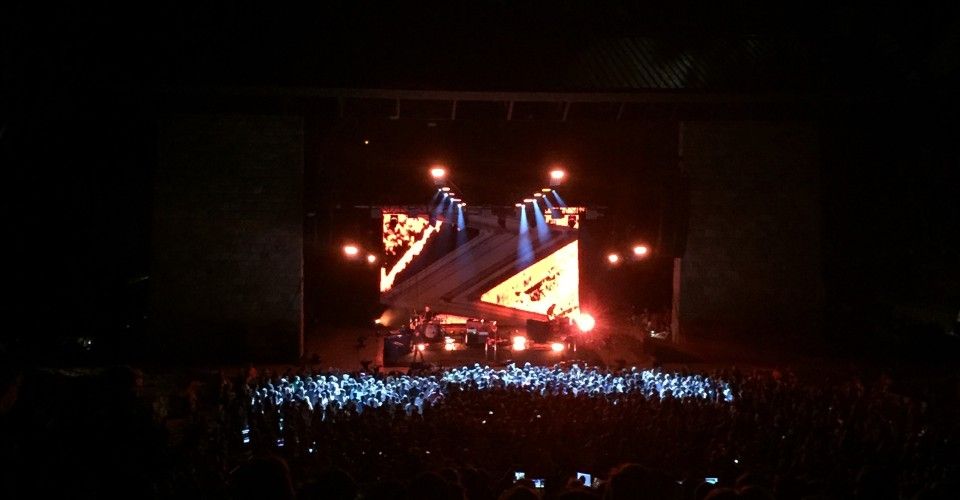 The Santa Barbara Bowl is an ethereal land with both free filtered water and sanitary bathrooms. It is the nirvana of concert venues. For those of us who have all but risked our lives to see our favorite bands play, fighting mosh pits, grubby drunkards and security guards with vendettas against having fun, the utopia that is the Santa Barbara Bowl is almost overwhelming. But I guess if you’re Ben Gibbard, you deserve nothing less.

My best friend and I hiked Mount Everest to get to our seats at the top of the Bowl. We were a comical distance from the stage — a good 100 yards (see photo). But hey, the view was better up there, as we could see both a full moon and the ocean sunset. Plus, we practically had the whole section to ourselves. We basically had a private concert.

If we looked upset, it wasn’t from any external circumstance. My BFF and I have been listening to Death Cab since the early years of high school; Gibbard’s voice has been the soundtrack playing behind nearly all our woes of adolescence. He has singlehandedly helped (or, perhaps, indulged) us in our coming-of-age sorrows. So if we looked incredibly depressed as we sat in the Alps of the Santa Barbara Bowl, it’s because we were trying to process what was about to take place.

Best Coast, who opened for Death Cab for Cutie, completely rocked. Lead singer Bethany Cosentino played her electric guitar and looked like a fabulous mermaid-nymph in her metallic skirt. Or at least I think it was a metallic skirt. Like I said, we were pretty far away.

Cosentino sang some of Best Coast’s SoCal hits like “California Nights” and “The Only Place.” She was almost on par with The Bangles’ lead singer, Vicki Peterson, with her strong, distinct vocals. Almost.

Ending the set with “When Will I Change,” Best Coast thanked the crowd for coming and left the stage. That gave us 20 more minutes to prepare before Death Cab appeared

And then there he was — Ben Gibbard in his full glory — starting off the show with “No Room in Frame” from their March album, “Kintsugi.” The term Kintsugi refers to the Japanese art of repairing broken pottery with melted gold. And like any avid, melodramatic listener, I automatically wondered if this had something to do with his divorce from Zooey Deschanel. Actually, I asked myself that about every song he played. And the “Z” zig-zagged on the “Kintsugi” album cover? Clearly a subliminal message.

Whether or not Gibbard is still traumatized by the separation (who are we kidding? We all are), he’s putting the past behind as he travels the globe with his band. The band has concerts lined up for months, from Montana to Scotland to Austria, all the way to Singapore in March 2016.

“I can smell you’ve all brought your bongs, so this is going to be a good show,” Gibbard said after his first song.

But we nosebleeders were in the clearer, untainted air.

We didn’t just have a view of the band; we also had a great view of astronomy and the city lights up there. So maybe we weren’t too high up. Maybe we were just watching a bigger stage.

Gibbard switched instruments nearly every song, jumping from electric guitar to acoustic to piano. As if it weren’t already an emotional evening, he played the tear-jerkers like “You’ve Haunted Me All My Life” and “What Sarah Said.” After performing a good blend of songs from “Codes and Keys,” “Plans,” “Kintsugi” and “Transatlanticism,” Gibbard told a story about how he and guitarist Dave Depper went on a run in Santa Barbara that morning, where they came across a pond and decided to jump in.

“It was not doo-doo water, but it was not good,” Gibbard said, expressing that he was afraid they were now both contaminated. “This might be the beginning of the story where we become superheroes. I don’t know if we’d use our powers to fight crime. It seems like there’s a lot of people doing that.”

As though that were a proper segue, he began the intro to the band’s biggest (andmost nostalgic) hit, “I Will Follow You Into the Dark.”

Everyone was singing along, which was slightly glorious and also slightly irritating. My best friend and I battled tears. Gibbard continued the set as if nothing had happened.

“Maybe for my superpower, I could be Sweat Man,” he said after the song, using a towel to dry himself. “I could just run up to people and tackle them and get them all sweaty.”

The band was so polished that I had to keep reminding myself it was a live performance. Soon, it was 9:45 p.m., and Gibbard prepared us for his exit.

“Sweat Man has made it all over Santa Barbara,” he said. After finishing “Crooked Teeth,” he dragged his guitar along the ground and left the stage.

Gibbard gave a generous encore with three songs: “Passenger Seat,” “Marching Bands of Manhattan” and closing with none other than “Transatlanticism.”

The cathartic event over, my best friend and I began to pick up our broken feelings and pieces of trash from the ground. We drove back on PCH with the windows down, waiting for the process of Kintsugi to begin.

Choose Ashchewsyou to Mix up your Eateries