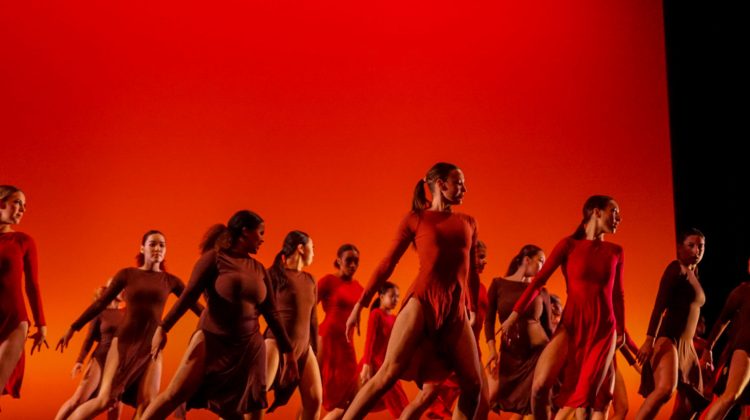 The Dance in Flight company had their annual performance of three shows in Smothers Theatre from Feb. 10 to 12.

“Dance in Flight” is a student-run dance company meant to showcase the talent and creativity of dancers and choreographers. Joining DIF requires filling out an application and preparing a 30-second routine before auditioning, according to Community Pepperdine.

“We held auditions for the company in September and had weekly rehearsals from then until the show,” second-year dancer Sophia Douville said. “It took about five months in total to prepare.”

The production’s theme this year was “Normal.” The inspiration behind this concept was how the past two years lost the sense of normalcy due to the COVID-19 pandemic.

“From becoming experts of Zoom, to accessorizing masks, to becoming survivors of a pandemic, we are surrounded by uncertainty, however the beauty of that is the diverse experiences and community created though these ‘abnormal’ times,” Producer Danielle Minke and Director Reagan Zimmerer wrote in the show’s program. “COVID-19 has provided the opportunity to show our strength, tenacity, and grace.”

The show started with the full cast of 32 performing the opening number, “Inside,” which features the song “In This Shirt” by the band The Irrepressibles. First-year dancers Simone Chaddha and Annabel Becker both said this was one of the hardest routines for them to practice.

“[Inside] required the most classical technique, and a lot of effort to emote and perform based on the vibe of the song,” Chaddha said.

Becker said it was difficult to do spacing since dances like “Inside” have the whole company in the routine.

“You Can Cry,” featuring the song “The River” by singer AURORA, was a lot fun for Douville to perform, she said, but she admits that it took a lot of energy and stamina to practice.

“On the days where we would practice [You Can Cry] over and over again, it was easy to get tired fast,” Douville said.

Right before intermission was the number “I Can Feel It,” including a medley of songs from rappers, Lil Nas X, Kendrick Lamar, Nicki Minaj and Kanye West.

“I had a lot of fun learning this dance, and just enjoyed the choreography and dancing with an amazing group of girls,” Becker said. “Every rehearsal for this dance was always really fun to be at.”

Act II opened with the routine, “Wired,” which features another medley of songs, “Work From Home (feat. Ty Dolla $ign)” by group Fifth Harmony, “Streets” by artist Doja Cat, “I Like It (with Bad Bunny & J Balvin)” by rapper Cardi B and “Fergalicious (feat. will.i.am)” by singer Fergie. The piece interprets the reality of only having the option to communicate through a screen the past two years.

“I love all the routines as they all bring something unique to the table, but I particularly loved performing the heels routine ‘Wired’ because of the Zoom storyline and little quirky moments throughout the dance that make the audience laugh,” Chaddha said.

“The style of dance that I’m most trained in and enjoy the most is ballet, so it felt comforting and natural,” Douville said.

“The American Dream” is the tap dance number that includes “La La Land” cast’s song “Another Day of Sun.” The routine was the stand out for audience member Coco Zhao.

“I really loved [The American Dream] because it was so high-energy and fun, and I also know that tap dancing is super hard and exhausting,” Zhao said. “It was very impressive to see the dancers bust out a tap routine for pretty much the whole song while being in sync and performing with their whole bodies.”

Zhao said she enjoyed the event overall because she loves dancing and watching others dance.

“Going to a dance performance show really brought me a lot of joy,” Zhao said. “I was definitely hoping to see more dancing rather than video cinematography, but I still thought it was really well put together and that everything connected back to the main theme of ‘Normal.'”

Zhao said she was also captivated by the dancers’ costumes. She thought they matched the vibe and tone for each routine perfectly.

Douville said doing DIF this year was enjoyable because it was the first time since the pandemic that the company performed in front of a live audience.

“It felt exciting and rewarding to see all our hard work pay off,” Douville said. “I was in DIF last year and we had an online show. It was a very different experience compared to being in person this year and I’m thankful for that.”

Chaddha mentioned how fulfilling it was to practice and perform with the other women on DIF.

“[The women] always make me laugh, and if not laugh, then smile at the bare minimum,” Chaddha said. “They are also all really supportive and love to cheer each other on, both on and off stage.”

Douville said she had a lot of emotions performing on stage.

“Of course there were the nervous jitters,” Douville said. “It had been a long time since performing in front of an audience, but there was also so much excitement. Getting to be together these past five months and work so hard to make the dances come to life was amazing.”