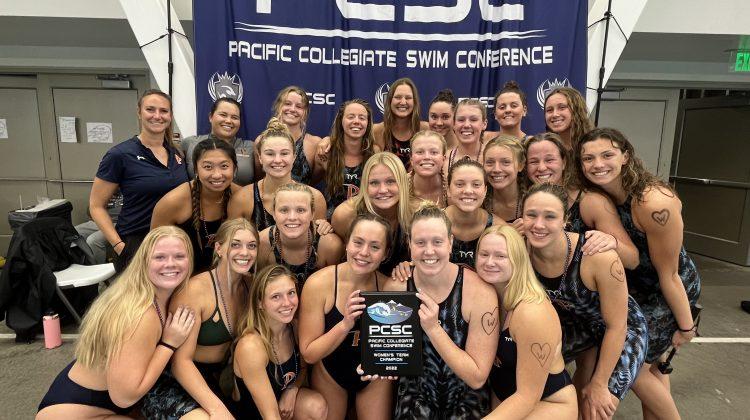 “We were so close to winning last year and getting second by four points kind of [left a] bitter taste in our mouth,” Monobe said. “But now the team really rallied around our seniors this year and I think for them, [it was] such a long journey to get here and so it’s kind of really it was definitely a pretty remarkable week for us.”

Fighting Through the Challenges

Facing adversity is something the Swim and Dive team is accustomed to. In Jan. 2020, Pepperdine fired then-Head Coach Joe Spahn after allegations of abuse.

Additionally, the team faced funding issues, which caused the team to consider canceling the program until an anonymous donor gave $1.6 million in 2013-14 season.

This season, freshman Gianna May said the Dive team didn’t have a coach at the beginning of the season. Diving Coach Monique Demaisip joined the team in October.

“We are a team as a whole but we’re very different sports,” May said of the Swim and Dive program. “I think we really changed together this year [where] the connection may have been lost somewhere in the middle [in previous years]. The support that we have for each other was just something that [I’ve] never seen before.”

During the month of January, the team faced a setback due to the Omicron variant outbreak. As a result of the scheduling of events, the team had a 55-day break until their meet against Fresno State on Jan. 14.

May said the break was difficult for divers because diving is a technical sport, and losing a few days out of the pool is like losing an entire week.

“We have to revisit these motions and techniques every single day,” May said. “For the production to become better and for us to get to a point where we can do new dives or harder dives or just perfect the dives we have on hand.”

But May said the team faced adversity through their culture and core values –– having grit, gratitude, accountability for each other and respect for their teammates and sport.

“I think that our team is really open and honest,” freshman Emma Purdy said. “When we see a space where we can get better and where we can work on ourselves and grow as a team, we’re gonna jump on that.”

Preparation for the Meet

Following the meet versus Azusa Pacific on Jan. 29, the team had a two-week break. Graduate student Kara Coughlin said by that point of the season, the training was done. The swimmers focused on tapering –– a form of slowing down the training and becoming more detail-oriented.

Coughlin said the team met with the school’s sports psychologist to get into the right mindset for the championship meet.

“It’s physically demanding when you go to championships,” Monobe said. “You’re racing four days in a row, preliminaries and finals and there’s a lot of emotions tied to it.”

Through these difficult challenges, Monobe said the team established core values at the beginning of the year, but it’s up to the players to carry them out and work on defining what they are.

“I think the kind of accountability piece really came into play this year because our championship wasn’t won by just a few rock stars,” Monobe said. “It was won by the team buying in and doing everything they needed. Every single person on our scoring team scored and did exactly what they’re supposed to do. And to me, that’s how you win championships.”

Pepperdine Women’s Swim and Dive team describe their challenges and experiences this season. The team broke a variety of school and individual records throughout the week. Infographic by Jerry Jiang

The team broke a plethora of records throughout the meet, and Monobe said it reflected all the hard work the team has put in throughout the season. The team felt like they owed this win to the seniors, with all of the challenges they’ve faced, Monobe said.

“You don’t stare at a black line at the bottom wall for 20 hours a day if you don’t actually absolutely love it,” Monobe said. “So, to me it was a combination of hard work and passion and really just kind of doing it for one another.”

In the NCAA Zone Diving Championships on March 12, freshman Lexie Martin finished 55th with a score of 180.95, while senior Pauline Holmberg finished 57th and had a score of 168.25.

Additionally, junior Jenna Sanchez set a school record and finished 30th in the 100 IM in the CSCAA National Invitational Championships on March 13 with a time of 58.72.

“It’s hard to get to the top but it’s even harder to stay at the top,” Monobe said. “For me, I think the recruiting is a big piece to how we’re going to continue to get better, but, really, to me, it’s just enhancing the culture because culture wins championships.”