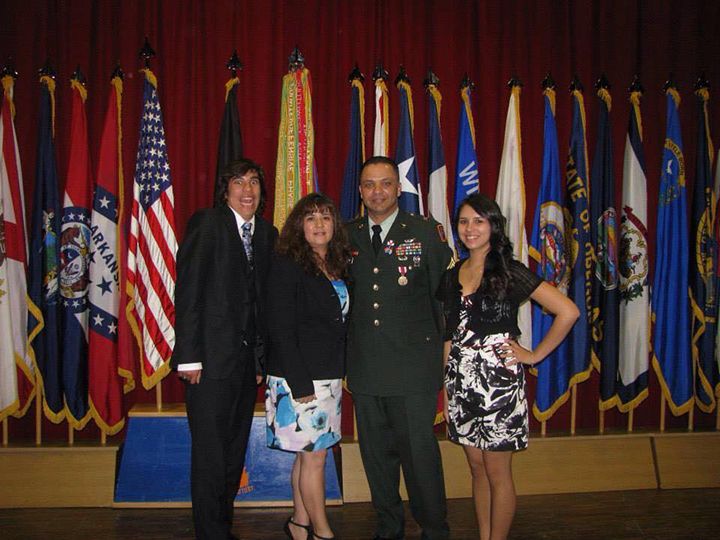 Keanu (left) with his family at his dad’s retirement ceremony on the military base in Ansbach, Germany.

As a campus, we are well acquainted with international students, but few of us are aware of another breed. This type of peculiar persons includes President Obama, Kobe Bryant, King Jong Un and Cady Heron from Mean Girls. These people may often think in Celsius and the metric system. They may be legally very much American and have an American passport, but no driver’s license due to having lived abroad. They can swear in multiple languages, and they — or shall I say we — are known as Third Culture Kids, or TCKs. The first culture refers to the culture of which the kid’s parents hail, and the second culture refers to a different culture that has hosted or hosts the kid. The kid then creates a third culture, which is an amalgamation, or rather, combustion of the two.

The result is someone who has an extremely broad worldview, is often multilingual and culturally sensitive; however, they may claim to be “culturally homeless” and show confused loyalties to countries, in addition to feeling “culturally excluded.” Despite being cultural chameleons, TCKs may often appear ignorant of their home culture because of having grown up elsewhere.

For instance, undeclared freshman Keanu Vaughn went home during Christmas break — to Germany. Due to his father’s military career, Vaughn was born in Georgia, moved to Giebelstadt, Germany, migrated to Fort Rucker, Alabama, spent a year in Simi Valley, California and moved to Ansbach, Germany, which he considers home. As a result, he reports “nearly dreading” the question everyone asks during NSO: Where are you from? “Depending on where we meet,” Vaughn said, “I can either tell them the whole story, or I’ll just say that my dad is in the military, so I come from Germany.” He said that this can still be annoying, because “both still take forever to answer because they cause more questions.”

Yet this fluid cultural identity comes with its perks. Vaughn is significantly less homesick than the majority of his peers. “The military life taught me how to adapt to any situation,” he said. However, despite being legally 100 percent American, he cites a degree of cultural hesitancy to consider himself fully American. Due to his complex upbringing, Vaughn said he feels “less American,” since he is “really not used to malls or convenient stores, huge movie theaters and everyone speaking in English.”

TCKs are a product of an increasingly globalizing world. In fact, according to the Washington Post, TCKs move an average of eight times before they graduate from (usually an international) high school. In as early as 1984, sociologist Ted Ward considered TCKs the “prototype citizens of the future,” where blurred national and cultural boundaries set the stage for diplomacy, intercultural affairs and multilingualism. The difference between a TCK and an immigrant is largely in terms of privilege. Immigrants often do not have the resources or the political means to return to their host country. Thus, cultural pluralism becomes less of a possibility as immigrants assimilate to the host country.

TCKs, often consisting of expatriates, thrive off and sustain the connection between the host nation and nation of origin.

Thus, in the ability of the TCK to culturally adapt to surroundings, TCKs experience a case of belonging “neither here nor there.” I myself engage in a dance of white lies to explain where I am from. I do this to give the most palatable and direct answer tailored to the individual asking, because legally, I am American. I was raised in China. I am ethnically Taiwanese, and what better global dilemma is there than to claim ethnicity from a land that raises questions on whether or not it is permitted a separate cultural or legal identity and state? Yet in China, I am questioned for my “Western demeanor.” In America, I am often mocked for my lack of cultural trivia and considered Chinese. Thus, if the alternative of being branded “sub-American” or “sub-Chinese” is “culturally homeless,” then so be it.