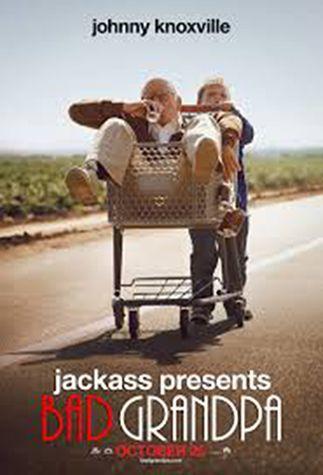 If you can handle explicit sexual innuendos, prosthetic penises, strippers, fake corpses, gushing feces and boorish language, then you will withstand “Jackass Presents: Bad Grandpa,” the fourth installment to the “Jackass” film series.

If you’re like me, and have never seen one of Paramount’s “Jackass” films because you would much rather make a trip to the theater to see the latest rom com or action movie (for the sole reason of seeing Channing Tatum shirtless), then you will also withstand this film. However, be prepared to shield your eyes, cover your ears and occasionally let out a gasp of astonishment.

Director Jeff Tremaine, producer Spike Jonze and star Johnny Knoxville are infamous for their egregious stunt extravaganzas. When it comes to “Jackass” movies, typical film criticism criteria isn’t relevant because the movies are nothing more than a series of lavish gag and stunt scenes strung together into movie length.

Although I could try to evaluate the movie on whether or not it has excellent cinematography, award-winning acting or flawless editing, that simply wouldn’t be necessary, because with this sort of film there really is only one piece of criteria that matters: whether the audience was shocked, amazed and entertained.

The simplicity of the first three “Jackass” films lies in the fact that no plot is present. Knoxville would announce the name of the gag to the camera, select an innocent bystander to subject to the trickery and then let the reactions unfold.

“Jackass Presents: Bad Grandpa,” took a different approach. The structure of the film draws a heavy comparison to the movie “Borat,” mixing interactions between fictitious characters and unsuspecting bystanders. Dickhouse Productions and MTV attempted to bundle the stunts and pranks into a loose plot, essentially providing a narrative cushion to dilute the characteristic Jackass-like quality. And, yes, you heard correctly, there is a plot.

Based on my previous knowledge of the “Jackass” phenomenon, I didn’t expect that my experience of watching “Bad Grandpa” would be so enjoyable. The stunts, while somewhat ludicrous, fascinated me. As much as I wanted to look away, I couldn’t help but stare as Irving’s (prosthetic) male member got stuck in a soda machine and he begged perturbed bystanders to help him pull it out. I even tried to cover my eyes as Irving entered an all-black male strip club, proceeded to undress himself and inadvertently let his own private parts dangle out of his tighty whities. Key word: tried. With stunts like these, you can’t look away.

The “Jackass” aesthetic prevailed throughout the entire movie; however, it felt a bit interrupted as the filmmakers tried to weave in and out of the live pranks with bits of narrative, something to which “Jackass” enthusiasts are not acclimated. The scripted scenes between Knoxville and Nicoll were a nice addition, but at times I found myself wishing the actors would break character even if just for a moment.

Knowing that the movie is nothing more than a series of pranks, it’s hard to adjust back and forth from reality to fiction. I do, however, give kudos to Nicoll, the adorably chubby actor playing Billy. His commitment to his character was undeniable and on the verge of creepy; sometimes it was hard to believe he was acting. For example, in one scene he stands dejected and lonely on a busy sidewalk asking bypassers to be his new father. He is what keeps the narrative aspect of the movie alive.

While the movie was mostly fluid, at times it felt uneven. The director, Tremaine, would cut off pranks just moments before the crew revealed that the entire scene was a gag. If it weren’t for the revealing scenes infused into the end credits, the audience would have no way of knowing how the people being pranked reacted when they found out it was all a hoax.

Nevertheless, the movie still entertained. And aside from being entertaining, it accomplished something almost deemed unimaginable from a movie of this sort: it revealed that our society is more decent and merciful than one might expect. Even when Zisman rolled up drunk in a shopping cart at a drive-thru asking for “chicken breasts, or any kind of breasts,” people expressed genuine concern. When Zisman makes Billy chug a can of beer at a public park, several witnesses intervene and voice their disapproval. The most heart-warming reaction occurs when Zisman and Billy finally arrive at a biker bar in North Carolina to meet with Billy’s father. After saying his goodbye, Zisman asks the local bikers to keep an eye on the child. One biker won’t leave Billy’s side.

Though this movie does have its faults, it reclaims its dignity with its heartfelt message. If you are not comfortable with a phony penis and many  poop jokes then maybe you shouldn’t race to the nearest theater to see this, but if you are intrigued by the “Jackass” movie phenomenon, then seeing this may be the perfect opportunity to join the craze.

The results are in: Benton announces phase 1 winners of Waves of Innovation

The results are in: Benton announces phase 1 winners of Waves of Innovation

Successful applicants of President Andrew Benton’s Waves of Innovation will receive one-time planning grants up to $5,000...
Copyright 2018 Pepperdine Graphic
Back to top