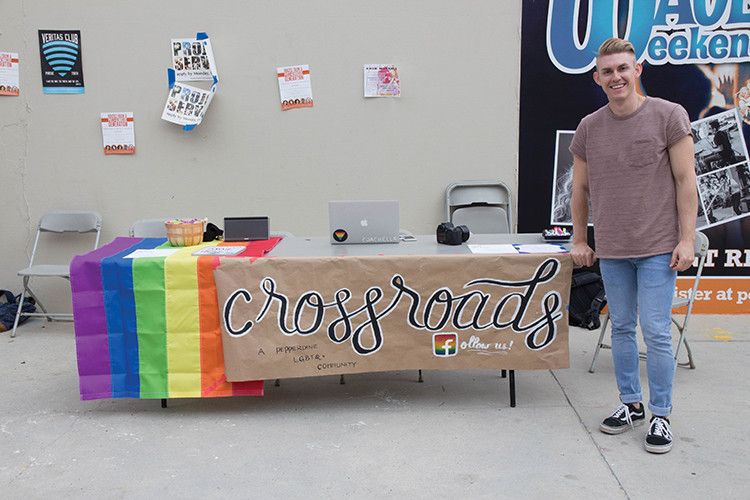 Crossroads tabled in Joslyn Plaza on Tuesday, Oct. 11 in honor of National Coming Out Day to honor the LGBTQ community on campus.

Crossroads President and senior Cameron Hart shared his journey of coming out in light of the Oct. 11 celebration.

This year was the 28th anniversary of National Coming Out Day, according to the Human Rights Campaign website.

Crossroads is “a Seaver College student organization created for all students to examine questions of sexual and gender identity and the intersection with faith. The purpose of the group is to provide support and a safe place for open dialogue,” according to a March 2016 Pepperdine press release.

“I’ve been mainly trying to be a voice for the LBGT community on campus,” Hart said. “I think that’s where I differentiate myself from other club leaders is I have a very strong community behind me – a somewhat invisible community – and I’m trying to make it more visible, more accepted, more welcome.”

Hart said the club decided to table “just to be there – to be visible as a community and also to shed light on the issue of coming out and how it can kind of be a uniting force for LGBT members and non-LGBT members,” Hart said.

Hart said his journey of coming out was a process spanning approximately three years, starting junior year of high school coming out to his mom, and culminating Feb. 22, 2015 during his sophomore year of college with a letter to his fraternity, Sigma Chi. He shared that the beginning of sophomore year is when he decided he needed to do something in order to be his truest self and let others know it. He began sharing with his friends, starting with his inner to outer circle before he wrote that final letter to Sigma Chi.

Hart said that giving this letter to Sigma Chi was terrifying.

“I don’t think I could have been more overwhelmed – it exceeded my expectations – and that’s kind of an understatement,” Hart said. “My expectations were backlash and it was the opposite. I was received with the most loving open arms of any group I had come out to.”

“And that’s because with Sigma Chi, the way our brotherhood is designed is that we put relationships with one another first and put that love for one another first and then comes everything else,” he continued. “So I think the fact that we had already established that among one another – it was really trivial – looking back on it with 20/20 hindsight – it shouldn’t have been that big of a deal. I don’t know why I was worried about it so much because they were my biggest fans and still are to this day.”

Hart shared that he is a very vocal person and is extremely open about that which is going on in his life. He credits these traits in his desire to come out personally to his friends, beginning with his inner circle and working his way out.

Hart talked about a new aspect of Crossroads that he has implemented, called “Brave Space,” providing an open forum for students to talk about coming out. Every other meeting will be a “Brave Space” meeting, with the other being informational. He said the “Brave Space” meetings are similar to a support group of sorts. The backing to his choice to call these meetings “Brave Space” instead of “Safe Space” is a testament to the courage that it takes for individuals to come out.

Hart said he didn’t have many expectations because he didn’t know how it would be received. But he said it exceeded anything he could have expected.

“We had about 20 people show up to the meeting, which is way more than I expected, and the conversation was slow to start, but once we all got comfortable with one another and introduced each other, it was really, really special; just authentic, real dialogue between all these LGBT students,” Hart said.

“And there were allies at the meeting as well, which was huge because I think we have to establish a community within ourselves – within our own student body first –before we can ask that of our non-LGBT peers. So just being able to hear other stories and how other people were struggling or are struggling was really cool and everyone really received the meeting well, and I think it’s only going to grow from there,” Hart continued.

He said he doesn’t particularly like the term “allies” as that implies enemies, which he said he doesn’t believe is the correct way to look at those who don’t understand or approve, but he uses it because it is a universal term for supporters, saying they are “non-LGBT members who offer the same amount of love, compassion and support as we would ourselves.”

For those that are wanting to come out, but aren’t sure how or when to go about it , Hart said: “I would advise these people to go about it on their own time. You don’t need to come out by any certain date or by any means, or to a certain number of people. Do it exactly how you want to do it in the time frame you want to do it in. But at the same time, don’t be entirely closed off to some more forceful influences, because sometimes it takes an outside push for you to get going and then realize its something you want to do.”

He continued that “it’s important to keep the momentum going. For the longest time, I didnt even believe myself that I was going to come out. But the fact I gained a lot of momentum by coming out to individual people and the people that I trusted, I kind of used that as fuel to complete my coming out process. Everyone’s going to be different. You don’t have to tell people straight up, you don’t have to write a letter. It’s completely up to you.”

“You don’t want to come out to the wrong person,” he said. He recommended establishing a strong basis of people one has already come out to before coming out to the people that he or she is worried about their reaction.

Hart talked about a Ted Talk he recently watched that shared how coming out doesn’t have to only be for those who are coming out as gay, bisexual or transgender.

“We all have comings out of our own – whether it’s having to talk about a tough financial situation, having to address an eating disorder, or having to admit that you’re stressed and anxious and under a lot of pressure,” Hart said. “It’s definitely not just a singular LGBT experience. I’m sure everyone can say that they’ve had to address a hard topic in their life at least once.”

On Tuesday, Hart said that they were “going to have some posters people can sign that say ‘I am _____’ and you come up to the table and write whatever you feel you have to get off your chest, whether it’s ‘I am hungry,’ ‘I am bi,’ or ‘I am trans.’ [You can write] anything, really,” Hart said.

Hart shared that coming out is a unifying factor for the LGBT community.

“I wanna have people take pictures holding the posters and then hang them up around the tent while we’re tabling so people can see what is going on on Pepp campus, what is actually happening,” Hart said.

Hart plans to create a big collage of photos of people holding the posters at Tuesday’s events to put on the freedom wall to “continue showing people that Crossroads exists, the LGBT students here exist, and they have a voice. But they also have a voice among other students that are struggling as well.”

Hart said that even he can sometimes be oblivious to some of the challenges other LGBT students face, because he didn’t face that much oppression. His friends and family were very loving and accepting and he never had to defend himself for who he was. This ease allowed him the opportunity and desire for a leadership role in an organization like Crossroads, he shared.

Photos Courtesy of Pepperdine University The University Church of Christ at Pepperdine has recently found itself in a season...
Copyright 2013 Jupiter Premium Magazine Theme
Back to top