Watching only the first week of March Madness is like tuning out after the first three episodes of “The Bachelor.”

Undoubtedly, most of the mayhem on ABC’s perennial nationwide phenomenon occurs during the early stages: Contestants drink too much, travel to potentially-embarrassing group dates, squabble for alone time with the reality TV man of their dreams and are sent home before most viewers (and the Bachelor himself) learn their names.

Why continue watching when the crazy, overdramatic contestants — who, let’s face it, had an approximately zero percent chance of winning — are sent home?

The same temptation arises during March Madness. The first round of the NCAA Men’s Basketball tournament is one of the most unique televised sporting events because it provides an opportunity for out-of-conference matchups that would not happen during the regular season.

Games between opponents such as Georgia State and Baylor; Wichita State and Kansas; or Gonzaga and Duke are entertaining because of the chance of upsets.

During these games, the possibility of a David overcoming a Goliath lingers in the air. It’s electric. It’s thrilling. It puts the Madness into March.

But what happens when the upsets stop? During this year’s tournament, early round Cinderella teams Georgia State and UAB exited the tournament 48 hours after they upset Baylor and Iowa Sate, respectively. This year’s Final Four lacks a loveable Cinderella team — like a Butler, a VCU, a George Mason — that keeps casual fans tuned in.

Strangely enough, No. 2-seeded Gonzaga was the last team in this year’s tournament that fit the underdog role, as they were the sole representative of a conference that hasn’t made the Final Four since 1957. But look how that turned out: Duke pulled ahead with 12 minutes to go and won by 14 — one more than the number of turnovers Gonzaga committed. Maybe next year, Cinderellas.

Upsets aren’t what the tournament is about. The point of the college basketball postseason is to crown a champion, or a team that can be called “the best.” If the postseason was only about mid-majors upsetting teams in big-name conferences, it would be called the National Invitation Tournament, the College Basketball Invitational or something along those lines.

Instead, this year’s Final Four is stacked with big-name contenders that play excellently “maybe impressively?” efficient, sometimes strangely beautiful basketball. The prestigious Final Four field of 2015 is destined to entertain, as it contains the clear-favorite Kentucky Wildcats; the two-but-sometimes-three-man wrecking crew called “the Wisconsin Badgers;” Duke; and the Michigan State Spartans, who despite being a No. 7-seed, have one of the best postseason coaches in Tom Izzo.

For bandwagoners and college basketball fans alike, rooting for Kentucky is almost too easy. Although siding with the clear favorite cuts out the emotional ups and downs of siding with the underdogs, you might pat yourself on the back for picking the safe route (and salvaging your bracket, which is mostly in shambles by now). Kentucky boasts a 53 percent chance of winning the NCAA tournament, according to the statistician gurus at FiveThirtyEight.

If winning the national championship isn’t enough of a prize, this group of Kentucky Wildcats might also become the first men’s basketball team to go undefeated since the Bob Knight-led Indiana Hoosiers accomplished that feat in 1976. Root against Kentucky, and you’ll root against history.

To revisit the Bachelor metaphor, rooting for Kentucky is the equivalent of watching only the first episode, immediately looking up the spoilers, and developing an inexplicable affinity for the nondescript fertility nurse from the Midwest.

While the rest of Bachelor Nation swoons over flashier and more interesting contestants, you can chastise them for their foolish ways. After all, you know you’ve already won.

As for the contrarians, the fans still bitter over their teams’ exit from the tournament, or any avid supporter of the three non-Kentucky teams in the field, the Final Four can potentially provide the same Cinderella thrill. Wisconsin is looking for a storybook ending to Wooden Award Finalist and seven-foot center Frank Kaminsky’s college career. Duke’s tandem of Jahlil Okafor and Justise Winslow can give Kentucky’s forwards a handful, if both teams meet in the championship game.

Michigan State, on the other hand, boasts a strong leader in senior point guard Travis Trice plus the depth necessary to combat Kentucky’s balanced attack.

For Wisconsin, Duke and Michigan State, the same sliver of hope of an upset will linger in Lucas Oil Stadium this weekend. The odds are stacked against them, Big Blue Nation is eager for a perfect season to be proud of and the players are aware of the criticism that they will receive if Kentucky takes them down.

But this tension, this “us versus the world” mentality that these teams exhibit, will be remarkable to witness as it unfolds on the biggest stage college basketball has to offer.

Perhaps these conditions are ideal for an upset. Maybe, just maybe, the quirky yoga instructor from Canada will win over the heart of the Bachelor and send that blonde fertility nurse packing — besides, she’s a little too perfect for him, right? 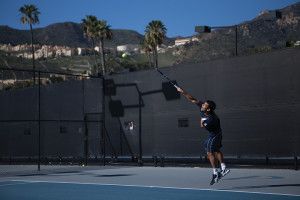