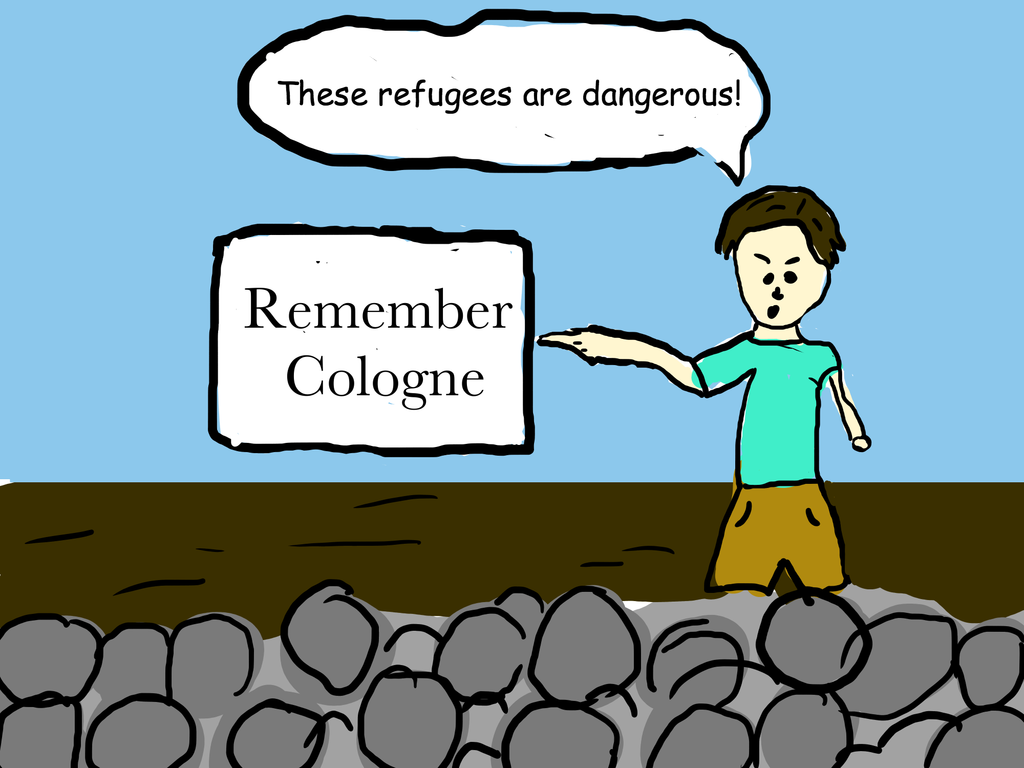 In the U.S., as well as in other countries that plan on resettling refugees, there is a worry that allowing refugees in creates too drastic of a danger to national safety. The issue of letting Syrian refugees into the U.S. has become an extensively discussed and polarizing matter on social media in the last couple of months. In Europe, similar discussions are being held. Asylum seekers are often portrayed in an unfair negative light.

Fueled by fear, the backlash against asylum seekers and refugees worldwide has only intensified since the News Year’s Eve attacks in Cologne, Germany. Initial reports stated that 1,000 migrants were responsible for robbing, sexually assaulting and raping women on Dec. 31, 2015. As stated by “Germany’s Merkel backs tight refugee rules” published by USA Today on Jan. 9, only 32 suspects were identified, 22 of whom were asylum seekers.

The event on New Year’s Eve has given fodder to individuals who already opposed migrants, not only in Germany but also in the United States. Presidential candidate Donald Trump, the Republican frontrunner, has used the Cologne attacks to bolster his campaign against migrants in the U.S., linking the attacks to Islamic terrorism on Twitter, according to “German sexual assaults lead to ‘I told you so’ claims on Muslims” published by The Washington Post on Jan. 11. As Pepperdine students with an online voice, it is important to look at the facts of the situation before fearing refugees in general and making rash judgments.

The way the attacks took place in crowds has been described as “taharrush gamea,” an Arabic phrase for group sexual assaults in crowds, as stated by “Attackers were of migrant origin” published by BBC News on Jan. 11. Even though there is no actual evidence that the attacks in Cologne were coordinated, according to “Many Germans’ Views on Foreigners Change After Cologne Sex Attacks” published by NBC News on Jan. 11, that has not stopped the backlash faced by migrants.

Germany has stated that it plans on making it easier to deport foreign criminals and to strip sex offenders of refugee status, according to “Attacks: Germany to make foreign deportations easier” published by BBC News Jan. 12. In light of the terrible events on New Year’s Eve, it makes sense to strengthen the laws against migrants who commit crimes. The people of Germany, however, have not all been satisfied with the measures that have been taken.

There has been resistance against migrants and minority groups since the new year. According to “New Year’s Eve Attacks; German police, protester clash” published by CNN on Jan. 9, 1,700 protesters took to the streets in anger about the events of New Year’s Eve, 500 of whom belonged to Patriotic Europeans Against the Islamization of the West (PEGIDA), an organization that opposes all immigration from the Middle East.

There has already been a large fear of migrants in the U.S. According to “More than half the nation’s governors say Syrian refugees not welcome,” published by CNN on Jan. 11, 31 states have protested against allowing Syrian refugees in their borders, several citing the attacks on Paris late last year. The attack on Cologne seems to add further support to those opposed to allowing refugees to resettle.

The fear in the U.S., as well as in Germany, is that allowing migrants into the country increases the danger of terrorism. Attacks such as those on Paris and Cologne are used as justification not to allow migrants in and to stir up fear against certain groups. However, the answer to this fear is not to close borders completely or to give into indiscriminate fear of all migrants or all people of a certain ethnic or religious background.

As stated by “Were Syrian refugees involved in the Paris attacks?” published by The Washington Post on Nov. 17, 2015, the terrorist attacks in Paris last November were carried out by EU nationals. The events in Cologne, as far as is known, were not part of an organized attack, but were instead the acts of individuals. Furthermore, 750,000 refugees have been resettled in the U.S. since 9/11 and only three of them have been arrested on terrorism charges.

There is potential danger in letting refugees into a country. However, it must be kept in mind that, according to Migration Policy, no act of terrorism in the U.S. has been perpetrated by refugees. Most refugees are just looking for a safer life for their families. It is important to be careful regarding who is allowed to settle within a country, whether it is Germany, the U.S. or anywhere else. However, we cannot allow fear to dictate whether or not it is right to help those seeking a safer home.