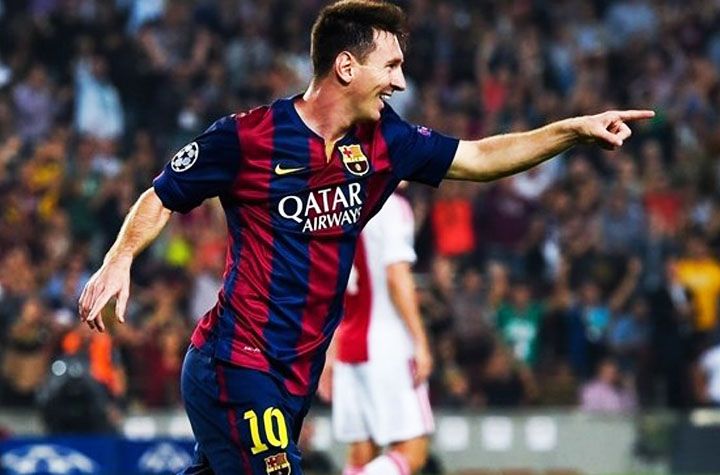 When it comes to soccer, it doesn’t get any better than the UEFA Champions League. The Round of 16 continues to heat up with the last four games of the first leg ready to kick off this upcoming week. On Tuesday, Manchester City will host Barcelona and at the same time, Juventus will take on Borussia Dortmund. A day later, on Wednesday, Arsenal will receive Monaco while Bayer Leverkusen faces Atletico Madrid.

Manchester City has the daunting task of facing Barcelona yet again. Both teams will be repeating last season’s Round of 16 and, although they look pretty even on paper, that is not what the figures suggest. On the last occasion, Barcelona drilled through Manchester City with a 4-1 aggregate score, winning 2-0 in England and then 2-1 in Spain. So far, the Citizens have struggled in the UEFA Champions League, barely qualifying for the knockout round as they scraped past Roma in the group stage.

Head Coach Manuel Pellegrini has the mission of leading Manchester City against arguably the most formidable strike force in the world. Luis Enrique’s side possesses the luxurious attacking trio formed by Brazilian Neymar, Uruguayan Luis Suarez and a certain Argentine player by the name of Lionel Messi.

Furthermore, when the crafts of Andres Iniesta and Ivan Rakitic are factored into the equation, beating the mighty Barcelona can be almost impossible. However, do not underestimate the English, for although they have not consolidated themselves in the UEFA Champions League, they are one of the finest teams in the Round of 16. With Argentine Sergio Aguero up top, Spanish David Silva in the middle and Belgian Vincent Kompany at the back, the Citizens possess a balanced squad and are by no means an easy target.

While Manchester City takes on Barcelona in England, Juventus will engage with Borussia Dortmund in Italy. The Italians are tasked with facing a team well-accustomed to the competitiveness of the UEFA Champions League. The Black and Yellows, although facing relegation in the Bundesliga, are one of the powerhouses of European soccer. Dortmund reached the quarterfinals of the Champions League last season and the final the year before that.

The Germans advanced to the Round of 16 as the winners of Group E, ahead of the favorites Arsenal. Bayern Munich’s greatest rival will fight for the trophy as it counts on the talents of Mats Hummels, Marco Reus and Ciro Immobile to lead the team forward. However, Juventus has the home field advantage and thus shouldn’t be taken lightly.

The Italians are flying as the league leaders in the “Serie” A and possess one of the most balanced teams in Europe. Juventus is gifted with a perfect combination of youth and experience. On one end, 2006 World Cup Champions Gianluigi Buffon and Andrea Pirlo stand as the pillars of seniority.

On the other, Arturo Vidal and Paul Pogba make up one of the most deadly midfields in the world. The Zebras have made it to the Round of 16 with an impressive defensive record, conceding only four goals in the group stage. This will be one exciting match to watch: Dortmund’s offensive prowess against Juventus’ defensive stronghold.

This could be the Round of 16’s most interesting match, Atletico Madrid’s defense-oriented style of play versus Bayer Leverkusen’s energetic counterattacking team.

Diego Simeone led Atletico to glory last season with the La Liga title and a Champions League final. The Red and Whites face Leverkusen as the acclaimed favorites. Still adapting to the departure of striker Diego Costa, equilibrium is the key to Simeone’s side. Atletico boosts a potent strike force in Mario Mandzukic and Antoine Griezmann.

Furthermore, the arrival of Fernando Torres from AC Milan give Atletico the talent necessary to face and beat any team in the world. If Atletico’s attack is strong then its defense is simply impeccable, courtesy of Diego Godin and Joao Miranda.

However, do not be mistaken – the Spanish will not have it easy, as Bayer Leverkusen is a tough nut to crack. The Germans have the strength of Kyriakos Papadopoulos at the back and the goal-scoring prowess of Stefan Kiesling up top. It seems like Leverkusen may be the tournament’s dark horse — the underdog who could surprise the world with a quarterfinal qualification.

Arsenal Head Coach Arsene Wenger will be very excited about this clash. Not only will he be facing the team that started his career, Wenger is in a comfortable position to lead Arsenal into the quarterfinals. Although Monaco made it to the Round of 16 as the winners of Group C, the French only scored four goals in six games. Monaco is still adapting to the departures of Colombian internationals James Rodriguez and Falcao Garcia, with veterans Dimitar Berbatov and Joao Moutinho trying — and failing — to fill their shoes.

At the back, veteran Ricardo Carvalho stands as the pillar of the team’s defense, but will have a tough time against Arsenal’s speedsters. Former Barcelona striker Alexis Sanchez is flying in the Barclays Premier League at the spear tip of Arsenal’s attack. Combined with German international Mesut Ozil, French forward Olivier Giroud and youngster Jack Wilshere, Arsenal has the firepower necessary to make a semifinal appearance at the very least. From where things stand, it will be a walk in the park for the Gunners.