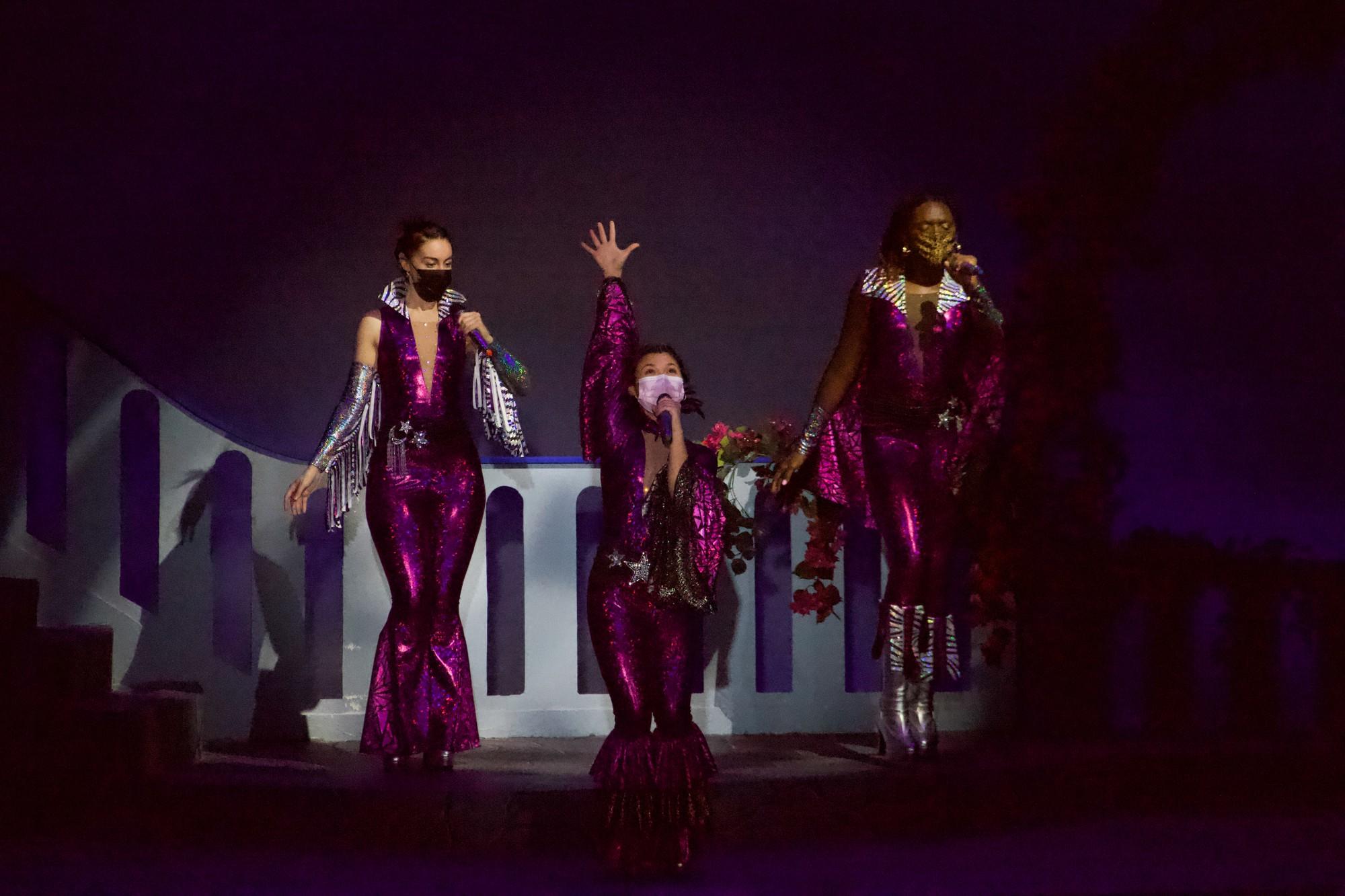 Dona and the Dynamos dance their way down the stage with their glitter microphones and ’70s jumpsuits. The show “Mamma Mia!” opens on Nov. 12 in Smothers Theatre and director Kelly Todd said she had this show on her radar for a long time.

Here they go again, Pepperdine’s annual fall musical is “Mamma Mia!” and with opening weekend right around the corner, the cast and crew said they couldn’t be more joyous to be back on stage.

“Mamma Mia!” runs Nov. 12-20 in Smothers Theatre — the cast auditioned during the first week of school and the ABBA dream is finally here.

The show is a light, and sometimes silly romantic musical with messages of risk-taking, family and love, Director and Choreographer Kelly Todd said. After the past crazy years Pepperdine has endured, the cast said they are delighted to simply belt and dance.

“I hope the audience takes away a message of love and family,” said sophomore Hannah Sedlacek, who plays Sophie Sheridan. “It’s all about love and relationship, family found or blood family — whatever that means to you.”

Many of the actors said this show is their first on the Pepperdine stage, and they haven’t performed since high school. With this in mind, Todd said she wanted a feel-good musical, and “Mamma Mia!” has been on her radar for years.

“Coming out of the pandemic, it really feels like a celebration to be together and be making theater again,” Todd said. “It was an easy pick for me.”

The plot revolves around Sophie ending the life-long search for her dad while juggling her relationship with her single mom — all the while coming to terms with who she is.

“Ultimately, the theme for me is in that last scene where one of the actresses says, ‘families come in in all shapes and sizes,'” Todd said. “Families can be all kinds of people: gay, straight, or whoever you find your family to be. It’s just a beautiful message of acceptance in my opinion.”

The audience can expect a dazzling set, highlighting Greek architecture with brightly colored flowers and an orange-pink sky glimmering on stage.

When the house lights go dark, one can already hear the beat of the infamous tambourine. At the start, the orchestra, conducted by David Fraley, plays a long instrumental for an anticipating crowd.

The show starts as Sophie hits the stage with her fellow bridesmaids for the song “Honey Honey.” The show is filled with multitudes of “Mamma Mia!” classics, such as “Slipping Through My Fingers,” “Lay All Your Love On Me,” and of course, “Dancing Queen,” for the ’70s club atmosphere, Todd said.

Junior Maddy Sprague plays the lead role of Donna Sheridan and said singing is what makes her feel most alive. Sprague has memories of seeing “Mamma Mia!” when she and her mom first came to visit LA. Sprague has listened to the soundtrack for months to “try and get it into her body,” she said.

“I just love how strong she [Donna] is,” Sprague said. “I love singing ‘Slipping Through My Fingers,’ it makes me feel sentimental for my mom.”

Toward the beginning of the show, Sophie’s three potential dads come trotting in from the side stage decorated as an ocean dock. Once Donna lays eyes on her past lovers, the show jumps right into the title track “Mamma Mia!”

Junior Dawson Foster, who plays Harry Bright, said he didn’t grow up on ABBA, but caved into listening to the songs — and then he knew he had to audition. Dawson sang a 32 bar cut of a Cher song and was called back for both Sam, another dad, and Harry.

“We were called back and then we’ll sing songs for the directors, usually the other people called back are in the room as well — very nerve-wracking singing in front of your peers,” Foster said. “We did a little number from ‘Dancing Queen’ and it’s not necessarily about how amazing of a dancer you are, but how much fun you can have and how quickly you can pick up the choreo.”

The show heats up with a spicy rendition of “Put All Your Love On Me” sung by Sophie and fiancé Skye Rymand, played by Spencer William. The song depicts the darker side of relationships when jealously and distrust arise. On-stage chemistry was prominent, Skye’s shirt even gets ripped off as the family-friendly musical shows its dimensions.

Through glitter mics and neon outfits, “Dancing Queen” is first introduced in a sleepover scene with Donna and her two friends.

“It comes in twice and at the end,” Sprague said. “It’s a huge flashy number, I’m so excited. I mean, glittery jumpsuits and rhinestones.”

The show ends with a sunny rendition of “Dancing Queen” once again, while the cast bows. They uphold the bohemian aura as they toss glitter beach balls into the audience.

“I’m excited to just let loose and use it as escapism and escape from whatever is going on in my life — it’ll be finals at that time,” Foster said. “With the stress of all of that, just to dance and sing and have a good time and just be with my friends.”

The intense feeling of celebration in this show is unavoidable — Todd says she hopes the audience leaves feeling lighter. Take the trip down to Smothers. Witness the work of the “Mamma Mia!” crew, as they take it one two-step at a time — as young and sweet as ever.

“I hope they feel some joy,” Todd said. “We’ve been talking a lot about joy. And sometimes joy just for joy’s sake, is really sometimes enough.”

Tickets can be purchased for $20 at the Smothers box office.