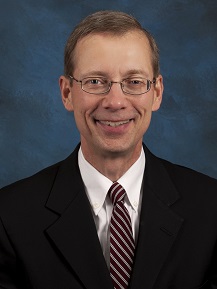 The new Dean of the Pepperdine School of Law is Paul L. Caron, who will formally begin his responsibilities as dean June 1.

“He’s very conversant, both with what he’s very familiar with the law school because he’s been there long enough, but he’s also very conversant with the discussion of the legal education area,” Marrs said.

Caron said he was asked by a number of colleagues if he would consider taking the position of dean when outgoing dean Deanell Reece Tacha decided to leave.

“I thought that because I had been serving as associate director for a couple years, I had a good handle on stuff,” Caron said. “So I thought I’d throw my hat in the ring to help the school, and folks agreed, so here I am.”

Marrs said there is already a plan in place to downsize the traditional size of the law school over a three-year period.

“One of his big goals is to get the law school to the right size and figure what the optimal headcount for students is,” Marrs said. “Another one obviously is to keep moving towards the quality of the students coming in and the education experience.”

Caron said he is at a stage in his career and life to do something different for a period of time to help the school out.

“What’s been very helpful is the current dean has been involving me in a lot of decision making, which is great because typically, a dean from the outside would show up on July 1 and have to start doing the job” Caron said.

Tacha said she will miss the relationship she has developed with the six years of students she has worked with at the law school. Since Caron has already been on the faculty and knows many of the students, Tacha said she does not doubt the connection Caron will have with the students.

“He’s had both undergraduate and graduate bible studies up at his house,” Tacha said. “He has been terribly valuable to us as a faculty member and I have no doubt he’s going to be a terrific dean.”

Caron said one of the great joys has been entertaining students at his home and getting to know his students.

“I’m looking forward to having all the students be my students now and getting to know all of them in that way,” Caron said.

Caron said he plans to come back to the faculty when his time is over as dean. He said the tough part of becoming dean is putting aside his love for teaching and his scholarly writing.

Pepperdine's Fundraising Holds Up to Other Universities' 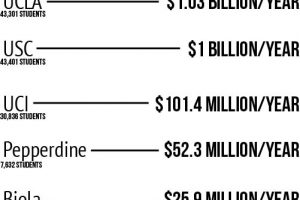 Pepperdine's Fundraising Holds Up to Other Universities'

Graphic by Kylie MyersPepperdine is holding its own, comparing its long-term fundraising campaigns with those of nearby state...
Copyright 2013 Jupiter Premium Magazine Theme
Back to top