Can Netflix Predict Your Major?

1. What show have you binge-watched recently?

b. “Parks and Recreation”

e. “Orange is the New Black”

2. Which movie genre are you drawn to?

3. Which critically acclaimed film would you watch in your spare time?

4. Which show have you been saying you’re going to watch one day?

5. What makes a movie great?

a. An understanding of human behavior

b. Effectively conveying its theme

If you picked mostly…

a = Social Science: You like movies and shows that explore human nature. Whether it’s the political intrigue of “House of Cards” or the psychological truths of “Chinatown,” your stories need character-driven plots and complex behavior.

b = Communication: You know how to tell a story, and you need your entertainment to know that, too. You can appreciate a wide variety of topics, from the goofy “Parks and Rec” to the thoughtful “Almost Famous,” and you like media from which you can learn a thing or two, in addition to keeping you occupied.

c = Natural Science: If there’s one thing you can’t stand, it’s Hollywood filmmakers who failed all their science classes trying to make a movie that deals with it. There’s no noise in space, you idiots! So films like “2001: A Space Odyssey” are a relief because they actually got it right, and shows like “Cosmos” are interesting, while having lower stakes than your upcoming lab practical.

d = Business Administration: You don’t just care about people; you care about systems. You can appreciate the intricacy of a show like “Mad Men,” as well as the starkness and power of a film like “Glengarry Glen Ross.” Remember to always be closing!

e = Humanities: You’ve done enough reading in your life to no longer have time for sub-par dialogue or uninteresting plots. “Orange is the New Black” has great writing that will keep you engaged, and “Clerks” is a great reminder of how far that creative writing degree will take you.

f = International Studies and Languages: You appreciate the world at large and, therefore, are interested in more than just the American experience. You want movies and shows that show a range of cultures and attitudes. “An Idiot Abroad” will remind you how you felt when you started traveling, and “Amelie” will make you want to jet off to France right this minute. 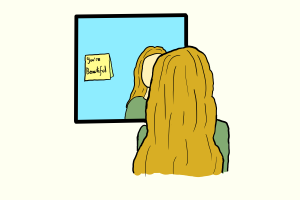 Art by Brooke MuschottAt Pepperdine, with a student body so focused on success, students pressure themselves to meet both...
Copyright 2013 Jupiter Premium Magazine Theme
Back to top