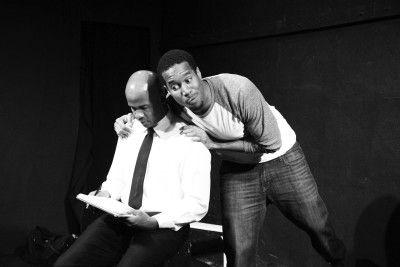 There is no Hollywood happy ending to the play “BUNK.” This black box production holds the viewers attention from start to finish. The play questions the dangers of stereotypes and misconceptions.

Written by alumna Julie Taiwo Oni (‘06), the play follows the story of  Wade (Terrence Colby Clemons) and Ade (Shon Fuller). The two characters are interviewees for a construction job, where they must work together to build a bunk bed. Educated Ade is Nigerian and street-smart Wade is American. They confront the cultural stereotypes that exist between Africans and black Americans.

The idea for “BUNK” came to Oni and director Nathan Singh about a year and a half ago, but the magic didn’t begin until three months ago at Larchmont Bungalow in Los Angeles. 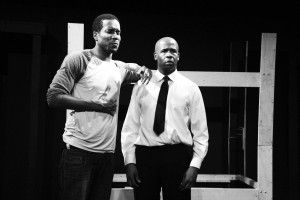 IN THE MOMENT – Actor Terrance Colby Clemons clutches his chest with great distress as his character, Wade, struggles to pull himself together. The actor duo portray two interviewees for a construction jobin alumna Julie Taiwo Oni’s (’06) play “BUNK.”

“Julie was pitching me this idea about the tension between the African American and the African community and I was telling her the type of relationship I want the audience to have with the performance,” Singh said.

At that same meeting, they decided to start their own company, so they would have  the power to produce plays that fit their vision for theater: bring plays to the stage that impacted the viewer and weren’t already being done.

They named their company MaiM. “We are MaiM. We want to maim and leave the audience feeling changed or touched in some way,” Oni said.

After being accepted into the festival, Oni and Singh began searching for actors. It didn’t take long for them to find Clemons and Fuller. They auditioned them as a pair and the chemistry between the actors was strong from the beginning.

“Working with Shon is really great. I believe that we have a very natural, almost brotherly kind of connection. There is a very strong bond we have, much like our characters. What I like about great plays is that they can’t help but seep into you and, especially as an actor, they become a part of you and everything you do,” Clemons said.

The actors were impacted by the play from page one. Clemons described wanting to cry after reading through the play for the first time. As an audience member, I was instantly drawn in from lights up. By the end of the play, I could hardly move from my seat.

“I didn’t choose the character, the character chose me. I had no idea what I was getting into. The first time we read the play was the very first rehearsal. We were cast off of the first 20 pages that she [Oni] had written. We could just feel in the first three scenes that there was something magical about to happen, but we didn’t know what,” Clemons said.

“BUNK” premiered at the Company Creation Festival on Jan. 8.

Before the action began, the lights remained dim and sounds of construction filled the air. Pieces of plywood lay in piles along the three walls of the stage.

I sat in the front row, inches from the actors at times. Oni’s script, with intense performances by Fuller and Clemons, made the experience memorable.

“I feel like there’s a lot of plays where it’s a celebration of culture and those are fantastic and I really respect those plays, but I think what’s really interesting and different about this is that it’s also showing the other side of culture,” Singh said.

“There are moments when we look out into the audience and we catch someone’s eye. When the lights come up and we say ‘Hey boss’ and we accidentally look into someone’s eye, that’s what the play is about,” Clemons said.

This play presents a powerful commentary about stereotypes and misconceptions, not just exclusive to Africans and blacks but among all human beings.

The play was overall phenomenal in both presentation and essence. I praise Oni for not sugar-coating the presence of stereotypes and the dialogue between the characters. The actors took what was given to them in words and translated them on stage in a powerful performance.

“The main challenge for me was knowing that I needed to do things with the play but now wanting to go there. It’s definitely the darkest thing that I’ve ever written and probably the most honest. That’s always a risk.  It’s always scary as a writer, but I felt like it was something that at this moment in time I really needed to do,” Oni said.

This play is for everyone. It is worth it for every Pepperdine student to make the trip to L.A. to see it.

“At Pepperdine you aren’t exposed to a lot of realities of the world, because they’re really observing and have a lot of control over the stories you’re reading, even in literature classes and things like that,” Oni said. “I realize that it’s probably not something that will ever be put on at Pepperdine, but I think that it’s something that you have to go outside to see what else is kind of happening in the world.” 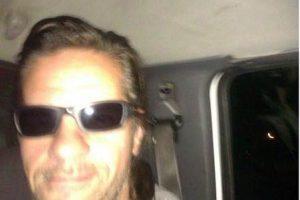