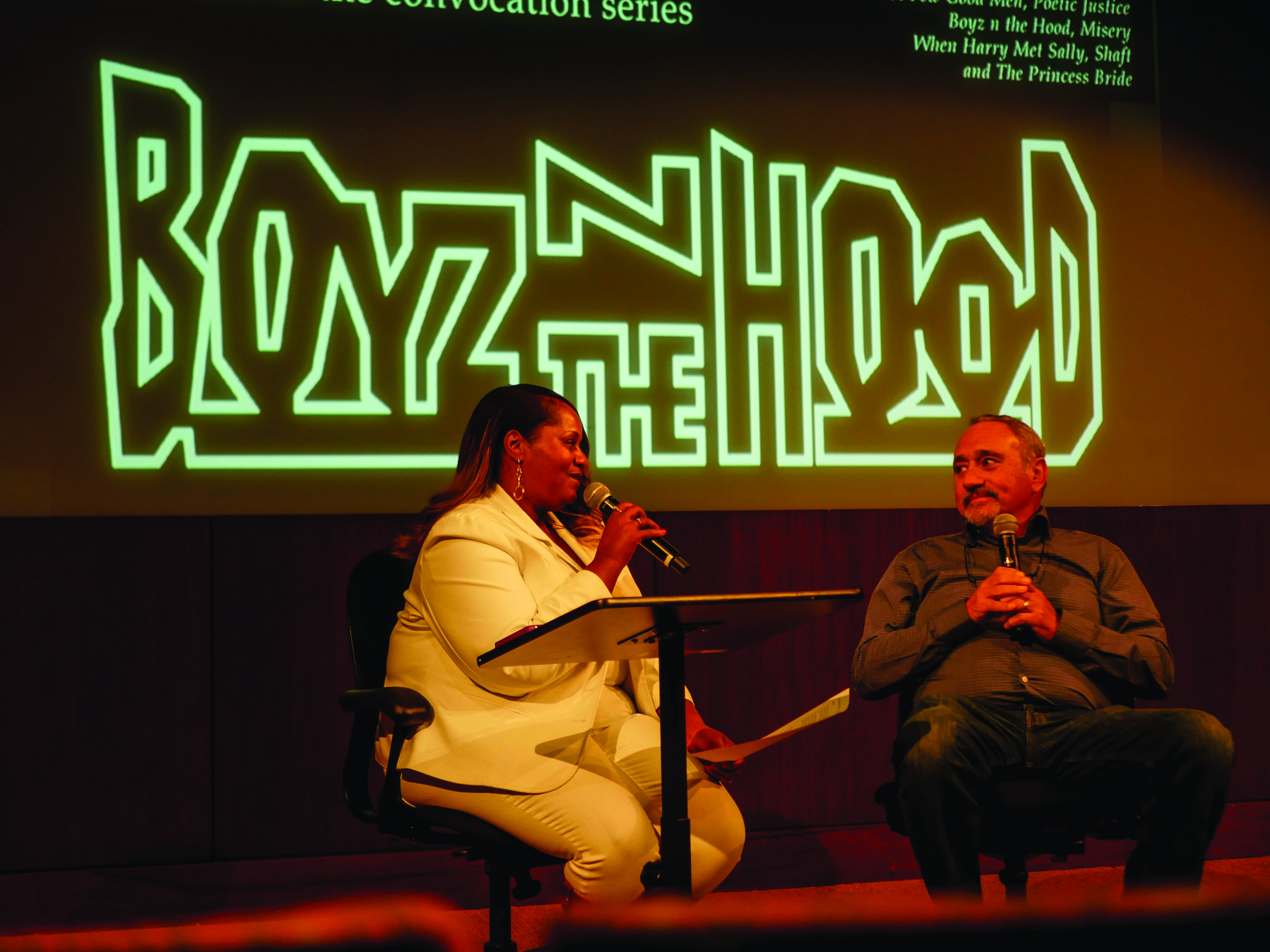 The producer of “Boyz n the Hood” recently shared his reflections on the film in Elkins Auditorium.

Renowned film producer Steve Nicolaides spoke with Pepperdine’s Director of Film Studies and Associate Professor of English Joi Carr in front of an audience of students. The event was part of the “Intimate Conversations” convocation series put on by the Multicultural Theatre Project.

Professor Carr originally contacted Nicolaides while working on her book “Boyz N the Hood: Shifting Hollywood Terrain,” Nicolaides said in an interview. The two agreed afterward to hold the convocation event at Pepperdine.

The film addresses the emotional toll of life in South Central Los Angeles in the 1980s and 1990s, and of “ghetto culture” more generally. The main characters become involved with gang violence and deal with corrupt law enforcement, while looking for ways to escape the dismal prospects of inner-city life. The film’s subject matter is still relevant to the present day, Nicolaides said.

“The issues the film addressed are still issues today,” Nicolaides said. “There’s still inequality. There’s still violence. There’s still a certain hopelessness for young Black men in the hood who have dreams just like every young person at Pepperdine University, but don’t have the access or the means to have an honest chance at fulfilling their dreams.”

Nicolaides spoke at length about his experience working on-location in Los Angeles. At the time of filming, there was significant tension between rival gangs, which was a cause for concern for the film crew. One particular scene had to be moved to a different location because of its proximity to a notorious Bloods gang territory known as the “Jungle.”

“I hadn’t actually seen ‘Boyz n the Hood’ yet, but seeing the meaning it held to the people who created it, and the people it reached back in the 80s and the meaning it still holds in today’s world, made me stream it later in the week,” Cannice said.

Nicolaides also spoke about the film’s reception at the time of its release and its lasting significance. Director John Singleton received nominations for Best Director and Best Screenplay at the 64th Academy Awards. At the time, Singleton was the first Black Director to receive the Best Director nomination, as well as the youngest.

One of the film’s most enduring legacies is its effect on the national dialogue about race, Nicolaides said.

“I really feel like this movie, as much as any movie in the story of modern race relations in America, started the conversation,” he said. “The conversation that is still, 20 years on, going on with Black Lives Matter.”

“‘Boyz in the Hood’ put a name and put a family and put a dream to the dead kids in the alleys.”