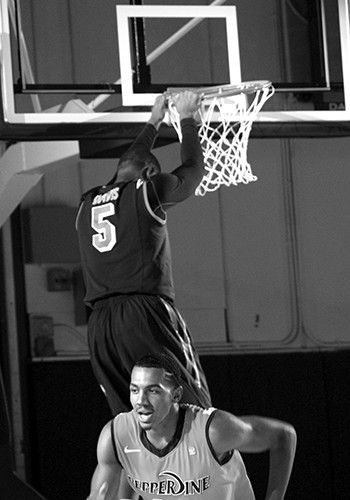 Fans of all ages filled Firestone Fieldhouse from the floor of the court to the farthest reaches of the gym Friday night.

The acapella group “Won By One” opened the festivities singing, and Waves athletes from a variety of sports came to life on the newly installed jumbotron, exemplifying this year’s campaign to “compete with purpose.” Dwyane Wade even made an on-screen appearance saying, “roll waves,” showing his support.

Sam Lagana, associate vice chancellor, served as master of ceremonies for the event. After the Pom Squad’s first performance of the year, they created a tunnel for the basketball team to walk through.

Fog rolled through the back doors as each member of the women’s basketball team entered the court, accompanied by video introductions. Head Coach Ryan Weisenberg, in his blue and orange striped pants, got the crowd roaring.

An additional short video allowed the fans to get to know members of the women’s team a little bit better. Their chemistry emanated from the screen offering a glimpse at the united front that will be present this upcoming season.

In a three-point shooting competition, sophomore Haley Videckis made 10 baskets, narrowly beating junior Ea Shoushtari who made eight baskets. Weisenberg said the “great group of players, great group of staff, will change the way you think about Pepperdine basketball.”

With the crowd already on their feet, the men’s basketball team kept the energy high at Firestone Fieldhouse. Head Coach Marty Wilson helped “#Pepperdine” trend on Twitter as he encouraged students to follow him for a chance to create their own pair of Nike ID Shoes, courtesy of @MartyWilson4.

The men’s players were also accompanied by their individual video introductions as they entered the court. Not only did the crowd receive these players with booming cheers; the players received each other with thunderous support.

The team split up in two groups, Orange and Blue, to compete in a 10-minute scrimmage. Representing the Orange team, senior Brendan Lane opened the scrimmage with a dunk. The Blue Team responded with a dunk from sophomore Stacy Davis, assisted by senior Malte Kramer.

During the match-up contest, sophomore Austin Mills and Lane showed great teamwork assisting each other.

“Austin and I have good chemistry. He’s good at making those passes, so [the scrimmage] worked out really well,” Lane said.

Lane attests that this season will be “night and day compared to years before,” though the team consists of many freshmen.

“Energy is never going to be a question, and the older players will keep the us level-headed,” Lane said.

Adding to that, Graduate Assistant Ricardo Fios said: “If we play like a team, we will be unbreakable.”

The men’s season opener is Nov. 9, as the team hosts San Diego Christian College. The women’s team begins its season in an exhibition game Oct. 30, at home against Westmont.

Laced up kicks give you wings 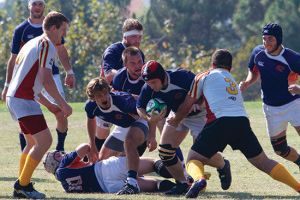 Photo by Marisa Padilla A lazy Pepperdine Sunday often looks like this: a late wake up, which rolls into a trip to church,...
Copyright 2013 Jupiter Premium Magazine Theme
Back to top