For my sophomore year at Pepperdine, I had the opportunity to study abroad in Buenos Aires, Argentina. I had never been to another country before and, due to the many issues that African Americans have faced across America, such as police brutality, discrimination due to skin color and culture or the feeling of being ostracized, I wasn’t sure how my experience would be. Yet, to my disbelief, I had no reason to worry.

Buenos Aires has been a glorious experience for me, and I am extremely happy that I chose to go abroad because I now see that many issues that African Americans face in America do not necessarily apply to the cultures of other countries.

I remember being lost in the city on the first night of the program. My phone was at five percent, and I had no idea what streets to walk down. At one point, I honestly believed that I would have to spend the night on the street. Fortunately, the neighborhoods in Buenos Aires have small little booths where police officers stay throughout the night. There were officers in each booth I stopped at, and they were more than willing to point me in the right direction. Had it not been for their hospitality, and that of the strangers on the street, I may have never made it home. I’ve also made a number of Argentine friends since I’ve been out there.

The nightlife of Buenos Aires is indescribable! Every time Ifeanyi Ezieme, one of my closest friends, and I went out with friends we easily made at least one Argentine friend at the end of the night. There have been countless occasions where our ethnicity alone strikes a conversation; people have even asked to take pictures with us.

Never once have I ever felt offended or singled out due to my race or ethnicity. In fact, I felt greatly appreciated. They would immediately ask me where I was from and how I was enjoying Buenos Aires. I would sit and tell them my story, and they would listen with intent. I think one of the most pleasing aspects of the people there was that they cherished different cultures and walks of life.

From my experiences here in Buenos Aires, people of African descent are not abundant within the city. During the first semester, I was able to keep count of how many people we saw. (Fewer than 50, if you are curious.) I remember eating at a restaurant that allowed graffiti on the walls and I saw, “Hay Negros en Argentina!!” I could not help but laugh at the fact that I was not the only one on the lookout. Whenever my friends and I met others of African descent on the weekends, we immediately connected. It never mattered that we were from America or if they could speak little English, there was an unspoken bond that was equally felt.

Living in another country for six months changed my outlook on the world immensely. The common worries that African Americans may have in the states does not apply at all to the numerous places around the world; it would be a shame to let fear stop an African American from traveling the world. My challenge to perspective, African American students is to not only go abroad, but to experience how appreciated you are in different parts of the world.

'Before I Fall' Reminds Audiences of the Important Things in Life 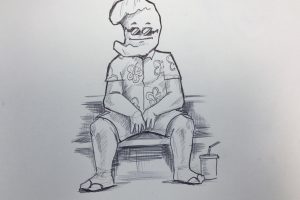 Art by Peau PorotesanoEvery year the sport seasons come and go. Every year we see the same low attendance numbers at sporting...
Copyright 2013 Jupiter Premium Magazine Theme
Back to top