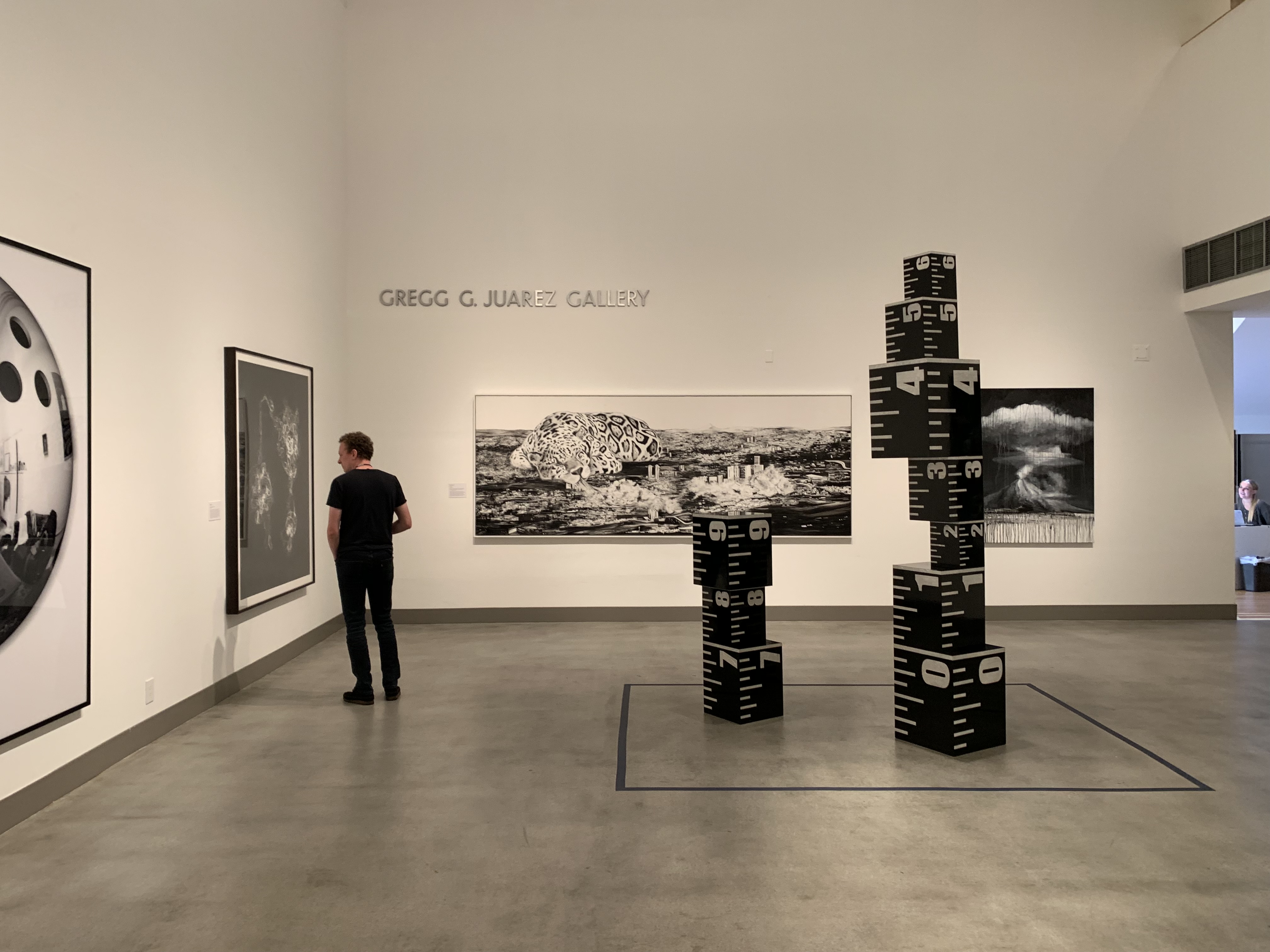 The Frederick R. Weisman Museum of Art hones the idea of two-tone in its new exhibit, “It’s All Black and White.”

The exhibit, which opened Aug. 27 and will be open until Dec. 8, features a great variety of pieces, all connected by the common color theme of no colors at all. While the powerful presence of black and white gives the collection a feeling of unity, Michael Zakian, the museum director, explained just how diverse the art can be.

One of the pieces present in the exhibit is James Drake’s “Raft of the Medusa.” Utilizing charcoal and steel, Drake created an impactful work filled with real-world meaning.

“Raft of the Medusa” portrays a historic event and a more current one, both of which include the suffering of people who are stranded with no way to survive. 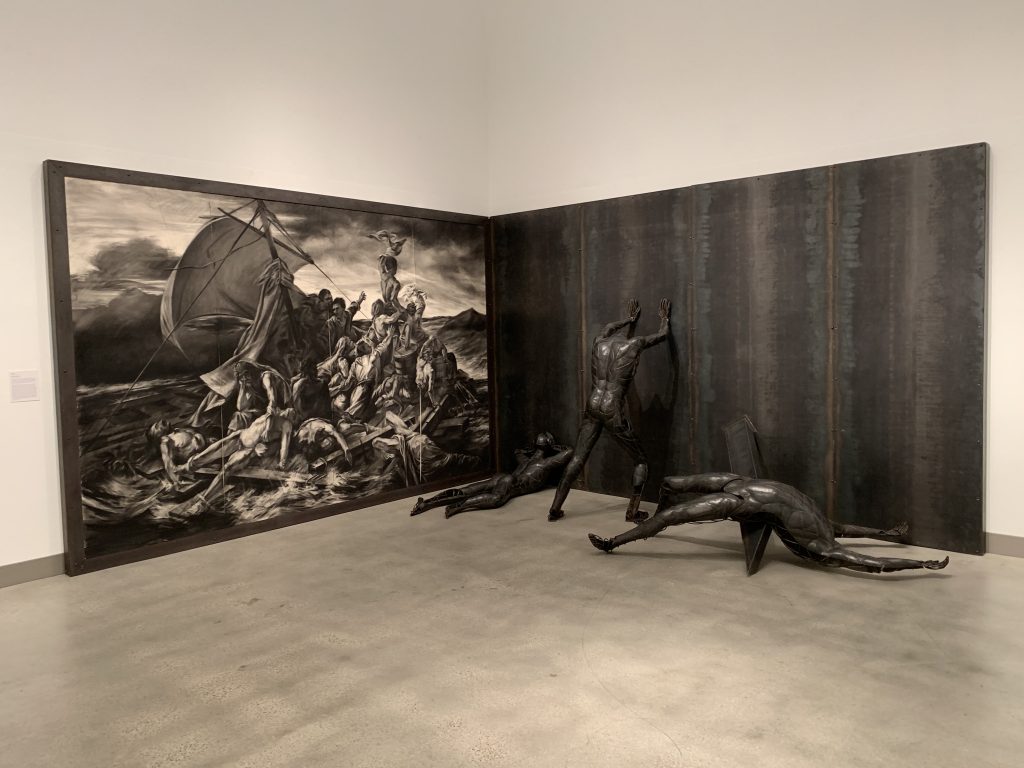 “Horizontal Men” is an example of appropriation, which was a popular art style in the ’80s. Appropriation samples existing pieces or images to create a whole new art piece, and Baldessari decided to use stills of dead bodies from movies, Zakian said.

“This is a reminder of how much violence there is in American film,” Zakian said.

The variety in the museum’s black and white exhibit exists in both materials and meaning.

“Seeing different kinds of art using 3-dimensional sculptures, photography and acrylics really gives you an idea of the fact that you have no limits, and you don’t have these expectations whenever it comes to art,” said Madelyn Griffith, a freshman visiting the museum for the first time.

Zakian said this kind of diversity within art comes in the expression, or lack thereof, of a deeper meaning.

“There’s art that’s profound and social,” Zakian said, referring to pieces like that of Drake and Baldessari. “But then you have something which is just pure design, and it’s so beautiful … it’s just pure abstraction.”

“We’re always wanting to do something different,” Zakian said. “Who would have thought of a painting with no paint?”

Having an art museum on campus opens up a lot of opportunities for students, whether they’re interested in art or in finding a place to center themselves. 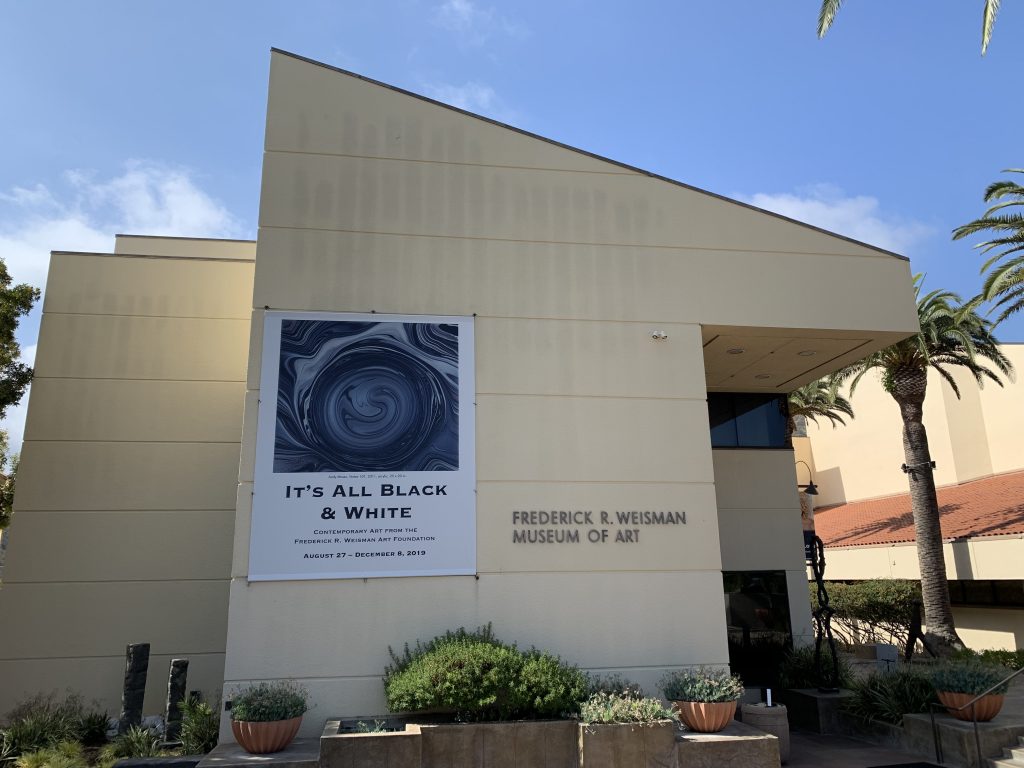 He mentioned an article by Adam Sternbergh titled, “Read This Story and Get Happier.” It describes Professor Laurie Santos’ class at Yale University called Psychology and the Good Life, which turned out to be the most popular course ever offered at the university.

“They’ve done studies, especially on college students, and rates of depression are going up; rates of unhappiness are going up,” Santos said.

Looking at art is a way to destress and decompress, Zakian said.

“A lot of museums are doing programs to use art as a source … so you can come … using your eyes and looking and thinking,” Zakian said. “So there’s something rewarding about that, and also something relaxing about that.”

Griffith, after walking through the Weisman Museum’s “It’s all Black and White” exhibit, agreed.

“I think it’s a really good experience,” Griffith said. “Just being in a very quiet space, observing, in the air conditioning, really helps to alleviate everything that you’re figuring out throughout your everyday college life.” 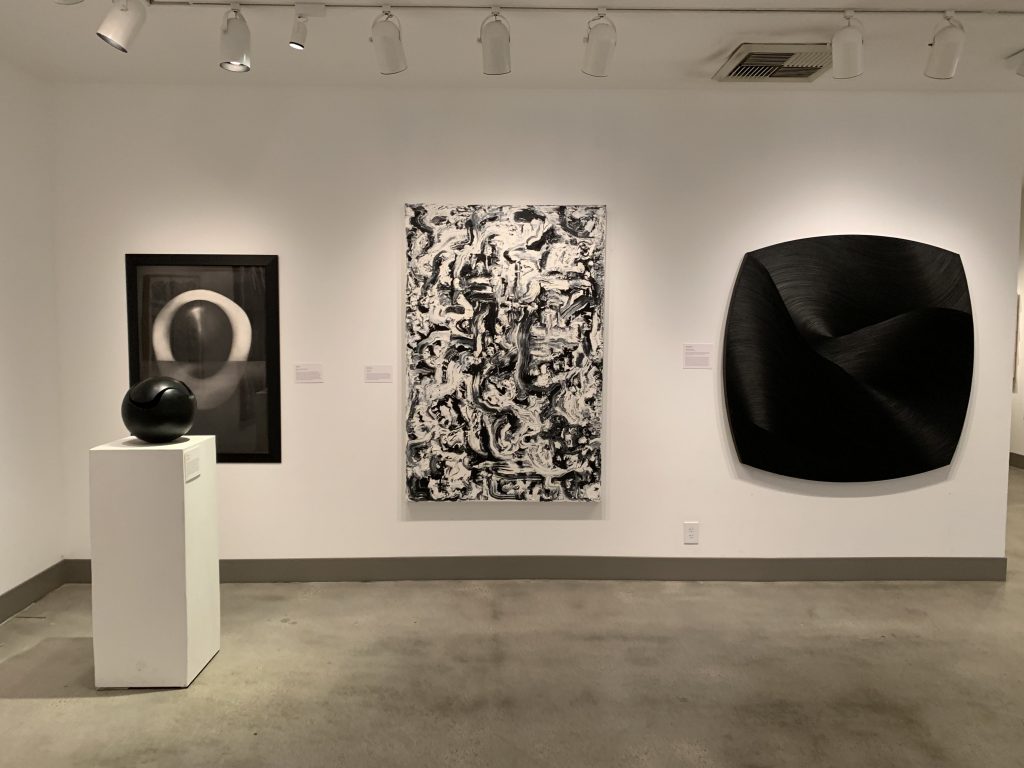 The museum’s new exhibit is filled with pieces that give the audience a sense of intrigue and exploration.

“I thought it was really cool,” Griffith said. “I knew there was an art gallery, but I didn’t know it was … all using different mediums. It gives you room to think and explore.”

“This is the whole semester, and it’s a fun, interesting show,” Zakian said.

The museum will host an opening reception for the exhibit Sunday, Sep. 15, from 4 to 6 p.m.

To see the exhibit and pieces like Drake’s, Baldessari’s and Hansen’s, visit the Frederick R. Weisman Museum of Art before Dec. 8, 2019. For more information about the exhibit and what is coming next, check out the museum’s website.