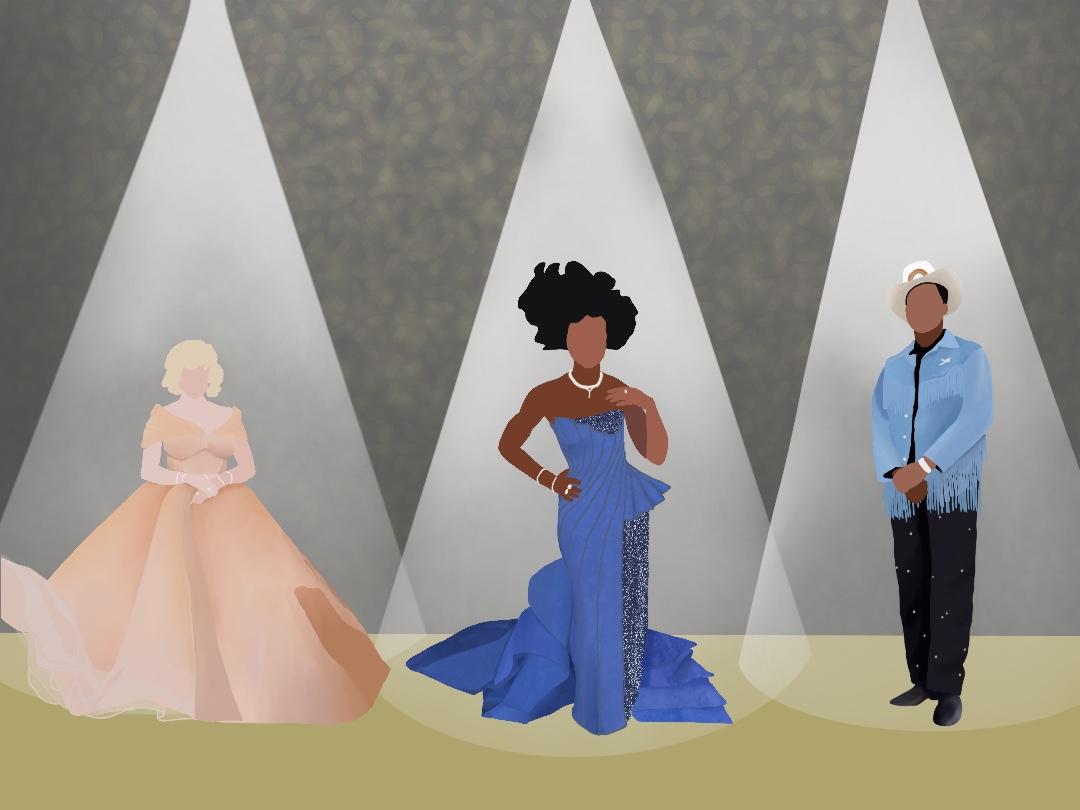 For the first time since 2019, the Metropolitan Museum of Art hosted the Met Gala in New York City on Sept. 13.

This year’s red carpet theme, “In America: A Lexicon of Fashion,” provided ample opportunities to showcase U.S. designers, reference iconic regional styles and pay homage to American icons, however most attendees seemed to struggle with sticking to the theme. Overall, this year’s red carpet was uneventful, yet some show-stopping looks still took the stage.

One of the best looks of the night, both in terms of following the theme and being a gorgeous outfit, was Lupita Nyong’o’s Versace gown. While Versace is famously an Italian fashion house, the gown transcends this deviation from theme by its denim fabric, the material behind iconically-American blue jeans. The dress has beautiful construction and manages to be both identifiably American and fun to look at, which is maybe the most important marker of a great Met Gala outfit.

Another highlight of the evening was Billie Eilish paying homage to Marilyn Monroe in Oscar de la Renta. Her massive blush ballgown is not from an U.S. label, but much like Nyong’o’s denim gown, its Hollywood inspirations transcend a foreign designer. She paired the gown with Monroe’s classic blonde bombshell hairstyle and Cartier jewelry. Eilish served as a co-chair for this year’s event, and her outfit is proof she deserved the position.

Almost every year at the Met Gala, the men’s outfits are nowhere near as interesting or as on theme as the women’s, and this year was no exception.

While most men attending the event seemed to just throw on a basic suit and walk the carpet, Leon Bridges nailed a classic American persona with his Bode-designed look. Bridges’ blue fringed jacket and cream cowboy hat gave the Fort Worth, Texas native’s look a truly authentic Western feel, opposing looks like Pharrell’s attempt to evoke the same style in an overpoweringly leather Chanel ensemble. Bridges represented a regional American style and used a U.S. designer to do it, making him one of the best-dressed men of the evening.

Attending the Met Gala means thousands of people will see your outfit, and some use that as an opportunity to send a political message with their attire, like U.S. Rep. Alexandria Ocasio-Cortez did this year with a gown emblazoned with the words, “Tax the rich.” While the intention behind her dress might have been to spread awareness or create change, the look was tone-deaf and tacky, as she wore the gown while conversing with some of the wealthiest people in the country.

One of the Met Gala’s biggest stars every year is Rihanna, who co-chaired the event in 2018. This year, she came to the Gala with her boyfriend, A$AP Rocky, marking their official red carpet debut as a couple. Unfortunately, he added nothing to her look, as he stepped out wrapped in a massive quilt with a basic suit underneath. Coming to the event with one of its most iconic guests and wearing a blanket is not an impressive look.

Whoopi Goldberg attended the Met Gala in Valentino, an Italian brand, making her look categorically off theme. If being off-theme wasn’t enough, the ruffle, tiered purple gown was shapeless, frumpy and clashed with the mint green gloves Goldberg wore. The Italian ensemble’s fabric-heavy nature swallowed Goldberg up, and its poor color palette didn’t help either. The look was un-American and ugly, making it one of the worst of the night.

U.S. designer Thom Browne had a great night at the Met, with stars like Pete Davidson, Erykah Badu and Evan Mock wearing his work on the red carpet. The looks were all distinguishably Browne’s and left an impression at the event, particularly Mock’s masked ensemble and Davidson’s mid-length dress.

Met Gala co-chair Timothée Chalamet wore an understated look that fit the event’s theme in a smart way, as he presented a classic streetwear silhouette using designer clothes by Haider Ackermann and Rick Owens. Chalamet paired his expensive outfit with an icon of Americana: high-top Converse. This look is very classic and references the streetwear style Chalamet often wears when he’s not on set.

There’s not much more American than football, so Ciara coming dressed as her husband, Seattle Seahawks quarterback Russell Wilson, is a genius way to be on theme and stylish at the same time. Her Dundas gown resembles a football jersey bearing Wilson’s number and she carried a small football clutch. Ciara’s outfit managed to follow the theme in an inventive way, a feat not many other guests were able to accomplish.

One of the more interesting looks of the night came from Frank Ocean, who wore an otherwise basic Prada outfit paired with a robotic baby doll. Ocean’s hair was dyed bright green, and his baby doll’s skin matched that color, giving the doll an alien appearance. The doll moved around like a real baby in Ocean’s arms, and while it’s not entirely clear why he chose to carry the doll — or how it fits into this year’s theme — it was definitely a more intriguing look than many that appeared that evening.

The next Met Gala will be held May 5, and will be the second part of this year’s event, creating the first-ever two-part Met Gala. The upcoming gala will extend the 2021 American inspiration, with the theme of “In America: An Anthology of Fashion.”

Hopefully, more attendees will adhere to this theme the second time around.