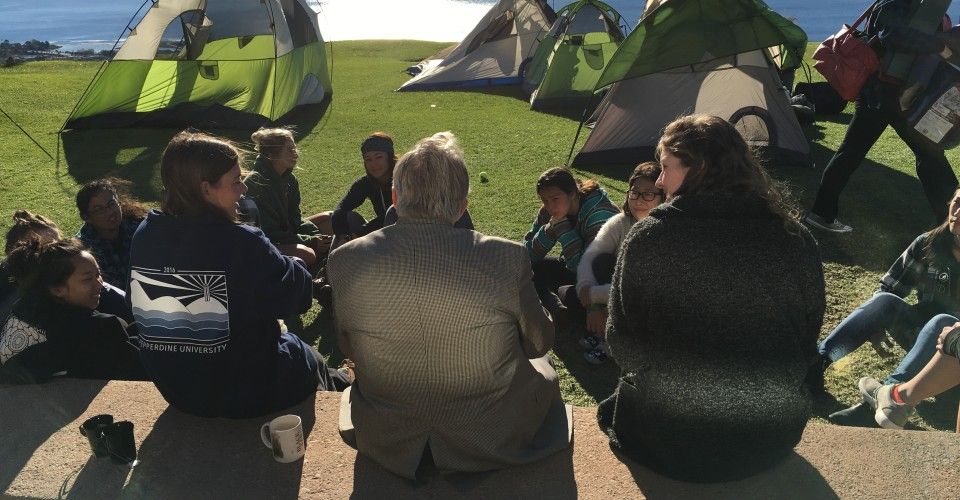 President Andrew K. Benton threw a house party with The Board on Friday called “AKB Campout,” inviting students to come and — you guessed it — camp out in his backyard for the evening. The event, however, was far from a grimy camping trip. There was no mud, hard labor or port-a-potty involved. In fact, the evening felt a lot more like a party at Jay Gatsby’s house.

The lights in the Brock House trees were lit for the first time of the season, illuminating the yard in a way Daisy Buchanan would call “simply dazzling.” After parking in AKB’s driveway and checking in, we received sleeping bags and customized long-sleeved shirts.

Next, we were ushered to the party.

There were about 30 students and eight tents to go around, which were conveniently already set up for us. One brave student, senior Caitlin Taylor, set up a hammock to bunk in. The rest of us called dibs on the open tents as quickly as possible.

The snack table was a mecca of candies in glass dishes, popcorn and cupcakes and — in place of the champagne-galore in “The Great Gatsby” — we had hot chocolate and chai tea lattes on tap.

(“As soon as I arrived I made an attempt to find my host, but the two or three people of whom I asked his whereabouts stared at me in such an amazed way, and denied so vehemently any knowledge of his movements, that I slunk off in the direction of the [snack] table … ” [10])

Like the elusive Gatsby, AKB did not attend his own party. Our host did, however, bring out a stack of pizza boxes before we watched “Inside Out,” and then he quietly went back inside.

The wind chill was severe, about 20 mph, when we asked Siri. One lonely, desolate tent collapsed before the movie started, and the students who had picked the wrong tent struggled to make it upright again.

After the movie, we sang a few worship songs and then snuck inside to use the restrooms. One student tinkered on the piano in the living room, while others peeked at the bookshelves.

“These are the nicest bathrooms I’ve ever used while camping,” senior Jenna Wall said as we brushed our teeth in a floral wallpapered bathroom.

By 11:30 p.m., the tree lights went out, and all of the students had crawled into their tents (except for Taylor, who was in her hammock). The wind flapped loudly against our tent, making the night longer than most.

Luckily, coffee was awaiting the next morning at 7:30 a.m. — quite early for college students on a Saturday — and Lily’s Burritos followed soon after. We sat around AKB, who said he gets up at 5 a.m. every day, and talked about his daughter, raccoons, Al Capone and grandchildren.

Notorious AKB had another party to attend (typical Gatsby), so we packed up our tents and sleeping bags. We said goodbye and were given extra breakfast burritos as party favors.

We had been told to bring swimsuits, but due to the wind, we didn’t get a glimpse of the pool until our departure — a shame, too, as it was a warm, sunny day, and it was as lifeless a pool as Gatsby’s. 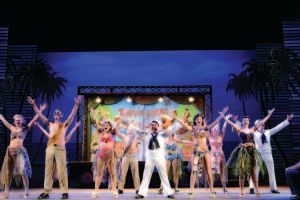 Photos by Danielle RomeoSouth Pacific is finally on campus. After having been denied three times in the past, the Pepperdine...
Copyright 2018 Pepperdine Graphic
Back to top