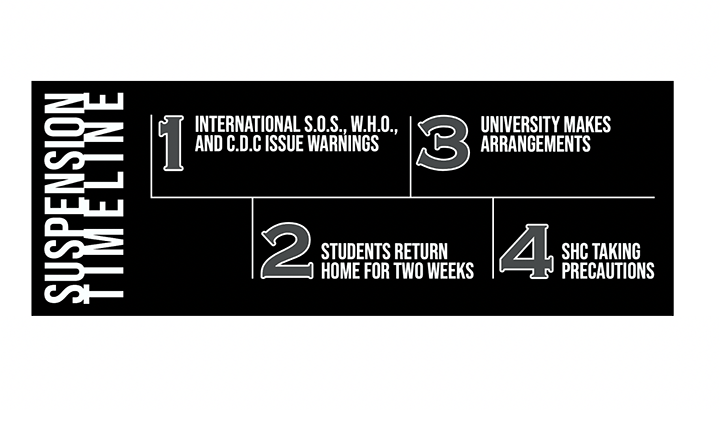 Pepperdine sophomore Bradford Holladay was backpacking by himself in Vietnam when he received the email informing him that his study-abroad program in Shanghai, China, would be suspended for the remainder of the semester.

“Immediately, I was trying to figure out how I was getting back home, since my plan was to get back to Shanghai, but I couldn’t do that anymore,” Holladay said.

Thirty-six Shanghai participants received an email from Executive Director of International Programs Beth Laux at 6:14 a.m. on Wednesday (Shanghai time) informing them of the suspension of their program. Like Holladay, most students were out of the country for their one-week travel break that follows the Chinese New Year.

The decision to suspend the program was not an easy one for university administrators like Laux, who analyzed the situation on a moment-to-moment basis for the majority of last week. Laux said the university monitors multiple resources to stay aware of potential threats to students abroad.

“This was really an interesting case: there was about 36-to-48 hours at the beginning of the week where a number of factors converged,” Laux said.

“I don’t know that there was one factor that prompted our decision in this case, because it happened very quickly,” Laux said. “This is really an evolving situation, so there’s not a lot of certainty on what this is going to look like in a few weeks.”

Student safety and health is always the primary factor in university decision making, Laux said, but the decision to suspend the full duration of the program came out of the university’s legal obligation to provide graduation requirements.

“The longer we stalled on making a decision, the harder it was going to be for us to create an academic experience that would meet those federal requirements for students to get credit,” Laux said. “That is one of the big factors that really came into play.”

In the initial email, International Programs instructed program participants to return home to their families at their permanent residences for two weeks. The university also provided travel arrangements for students to return home.

Holladay said the spirits among his program colleagues are dim.

“I think people are pretty disappointed just in general,” Holladay said. “[The school] has told us that we’re going to be taking the same classes back in Malibu, but they haven’t told us exactly who’s going to be teaching those yet.”

Laux said the university is in the process of making arrangements for classes, housing and student refunds for the semester. However, she was unable to disclose if faculty members are returning due to the Health Insurance Portability and Accountability Act (HIPAA).

“The risk of developing illness in an individual who stayed in China in the home of someone now ill with coronavirus or who stayed in Wuhan is much greater than the risk for someone who visited Shanghai and stayed in a hotel for a few days,” Larson wrote.

If someone on campus met the criteria for becoming a suspected case of the virus, that individual would go through an LA County of Public Health-approved test, Larson said. The SHC would also collect information about whom the individual was in close contact with and then contact them before obtaining the results of the test.

“Most likely, the student would be transferred to an E.R. designated by LACPHD [LA County Department of Public Health] for that testing,” Larson wrote. “Isolation of the student would occur pending the results of testing; location of isolation would depend on the individual’s medical condition and living situation.”

In the United States, person-to-person spread of the virus has been limited, according to the CDC and SHC. Larson wrote that there is no on-going transmission of the virus in communities and that the contagious nature of the disease is yet to be determined.

Students can get the influenza vaccine for free at the SHC. The SHC encourages students to lessen their risk of obtaining any contagious infection by washing their hands frequently, not sharing food or drinks, limiting contact with those who are ill, and getting enough sleep, fluids and nutrition. Larson wrote that students should also see their personal medical provider or the SHC if they are sick and have a fever or significant respiratory symptoms.