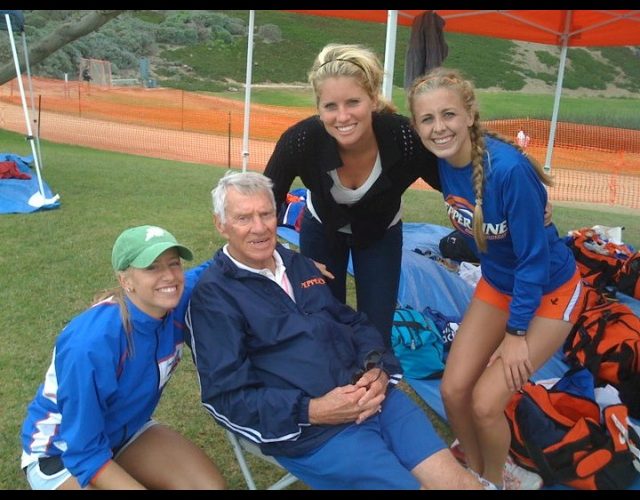 Richard Kampmann, a former cross country coach at Pepperdine who also coached for University and Dorsey High Schools in Los Angeles, passed away Jan. 23 at the age of 92. Kampmann, or “Coach K” as he was known by his athletes, fellow coaches and friends, left behind a powerful legacy after leading high school and college athletes for nearly 50 years.

Kampmann led the Men’s and Women’s Cross-Country teams at Pepperdine for 26 years, from 1989 through 2006. For a couple seasons after that, he worked with the Head Coach Robert Radnoti, as an assistant. Radnoti, who was a personal friend of Kampmann, said the former coach was in love with the sport.

“He was very passionate about running. It was kind of like one of the few things in life that he cared about, along with the students,” Radnoti said. “He just loved everything about track and field. He’d study it, he’d look at the results, if he knew how to use a computer, he’d have done that, but it was all on paper. He was just one of those little track geeks.”

Ashley Burt (’09), a Pepperdine alumna who ran for Coach K in his final years, said that Kampmann was not only a great coach, but also a powerful mentor who invested in his student-athletes’ personal lives.

“Even though he focused on developing athletes as better runners, he focused more on helping us become better people,” Burt said. “He really wanted us to be well-rounded: He emphasized our education, our relationships that we made at school, he participated in the religious aspect of Pepperdine too, he felt that was really important.”

“His speech would just linger on forever, because he wanted to make sure he spoke about each person on our team in-depth,” Burt said. “He was just so brutally honest with us, and had nothing but good things to say, but also nothing but truth to say.”

Chuck Levin, a political consultant living in Los Angeles, was coached by Kampmann during his years at University High in the early-mid ’60s. Levin said that, although Coach K was caring, he wasn’t afraid to push all of his runners to improve.

“He knew all of his runners individually. He knew what was natural about them, he knew where they could improve, if they trained and practiced,” Levin said. “His brilliance was in knowing your potential, and one way he expressed that to his runners was during practice: When you crossed the finish line, if he wasn’t impressed, he would just say, ‘Chuck, you’re late.’”

Levin also maintained a relationship with Kampmann after high school, and he, along with Radnoti, would often join the coach at his favorite restaurant, Izzy’s Diner in Santa Monica, for breakfast. Radnoti mentioned that Coach K often told fantastic stories of people and runners he worked with over the years, and Levin said that on three-day weekends, visiting Kampmann became almost a rite-of-passage for Los Angeles runners and coaches.

“Many, many runners from Uni High and Pepperdine, and some runners and coaches from across LA who didn’t run for Coach Kampmann, but admired him, on a Monday, when they would have their own day off, they would come to Izzy’s, knowing that he would be there,” Levin said.

According to the Santa Monica Observer, Kampmann coached a runner at Dorsey High in the late ’50s that eventually became a superstar in something other than cross-country: singer Mike Love of the Beach Boys. Love stated in the article that the 1963 Beach Boys classic “Be True to Your School” was inspired by him.

Burt said that Kampmann was also well known for his optimism and ability to spin anything in a positive light, as exemplified by how he reacted to tripping on an uneven sidewalk one day.

“He was laying there for a few minutes before someone helped him up, and they said, ‘What are you doing?’ And he was like, ‘I’m just lying here looking at the clouds,'” Burt said.

A celebration of Coach Kampmann’s life will take place Saturday at 11 a.m. in the University High School Auditorium in West Los Angeles. Anyone is welcome to attend.

Image Courtesy of BSAAs you may know, Black History Month begins on Feb. 1. This month is usually filled with little-known...
Copyright 2018 Pepperdine Graphic
Back to top