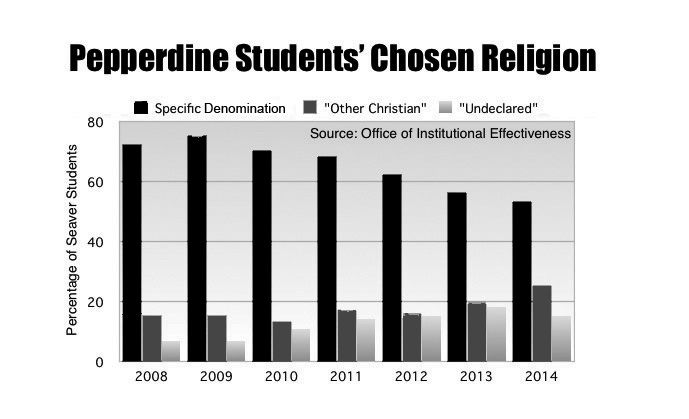 Walking around Pepperdine as a student, the presence of the Christian faith is given away by the huge cross on the front lawn and Stauffer Chapel, complete with stained glass windows. Since day one of New Student Orientation, Pepperdine hosted many Convocations and brought the student body together through worship. However, outside of the Pepperdine community, Christianity in more youthful generations may be shifting. Some believe it is becoming less popular, while some believe that the individual denominations are starting to mean less and less.

In a study done by Pew Research Center, researchers found that the number of people declaring themselves religious has decreased in recent generations.Polls from a survey done by Pew in 2012 showed that 32 percent of people ages 18 to 29 said they were unaffiliated with any religion, while only 9 percent of people older than 65 said the same thing.

Pepperdine Chaplain Sara Barton said she has noticed a reluctance among her students to identify themselves as belonging to a certain denomination. Throughout her 23 years teaching and ministering, the amount of her students who write down that they are nondenominational has increased.

“I see students experimenting while they’re here with different denominations,” Barton said. “I wonder if it feels kind of freeing to say ‘I’m a Christian, but I don’t want to pick a specific group right now.’”

Freshman Elise Sanchez, who grew up in a Christian home, has also seen a notable decrease in her peers who declare themselves religious.

“Out of all my friends that I’ve grown up with, I can count on one hand how many have kept their faith or stayed religious,” Sanchez said.

Pew Research Center also reports that the rise of “nones,” those who are religiously unaffiliated, can be due to a social change between older and newer generations.

Some correlate the increasing rate of those who identify as liberal to be a significant factor in why statistics show a change in faith.

According to Pew Research Center, the amount of “nones” who vote or lean Democratic increased by 7 percent between 2007 and 2012. The religiously unaffiliated are also twice as likely to label themselves as politically liberal instead of conservative, and adult supporters of legal abortion and same-sex marriage have increased drastically as well.

There are 825 students at Seaver College who identified themselves as “other Christian” in the fall semester when asked to specify a certain religion, which students are asked to fill out upon applying for enrollment. Statistics from the Office of Institutional Effectiveness show that although people who identify with a specific denomination are still a majority, that number has decreased by 19 percent since 2008, and the amount of people that identified as “other Christian” or “undeclared” have increased by approximately 10 percent since 2008.

One explanation for the cross-country decline can be taken from General Survey Data, according to a Huffington Post article by David Briggs, a writer for the Association of Religion Data Archives. According to the data, people who never attend religious services have increased almost 10 percent in the past two decades. Percentages of people growing up with religious fathers have also declined, and fewer people are saying they have a lot of confidence in their religious leaders.

While the statistics reflect that religious affiliation is decreasing, some argue it is not.

Associate Professor of Religion Dyron Daughrity has written several books on religion, including “The Changing World of Christianity: The Global History of a Borderless Religion,” which discusses Christianity as being the largest religion in the world today and points out how it has changed drastically. He said he believes that while “nones” are on the rise, the amount of people who are religious is not decreasing — it is simply changing.

“We don’t really know what is happening in America,” Daughrity said. “We don’t know if people are more religious or less religious. It is still undetermined.”

Daughrity says today’s generation is very different. Nowadays, people are selecting churches based on personal preferences in regards to worship, sermon and community, as opposed to staying under a specific denomination of Christianity. He said brand loyalty, or loyalty to a specific type of Christianity, has decreased significantly.

Barton said this behavior is especially common among college students.

“I think college students and church hopping goes hand in hand … They go with their friends, they try different things. It’s not necessarily bad, but it’s noticeable,” Barton said.

Barton said she guesses the reason behind the church-hopping and why students do not typically have denominational loyalty could be caused by a variety of factors. She said students may have had a bad experience with their church, or simply all the “moving around” we do as students could make it difficult.

Freshman Kristen Friese said she is still looking for a home church.

“I’m not very strict in what I’m looking for,” Friese said. “I just want pastors that I respect, a community I can get involved in and similar doctrines to mine.”

Friese said she does not label herself with a specific denomination, but would rather just find a church that appeals to her.

Students explore churches not only under their family’s denomination, but keep an open mind and look for features that appeal to their personal preferences, tasting the different flavors of Christianity in a way.

Daughrity said this new method of looking to get plugged into a religion can explain why the numbers in the surveys conducted by Pew Research can be misleading to the actual representation of religion in America.

He said the data cannot properly be found, because to really know how each person feels about religion, they would have to conduct a qualitative interview with the individual as opposed to conducting surveys that may not be asking the right questions.

“Who did the survey is key,” Daughrity said. “Who is interpreting the data? There’s all kinds of room for data to be misconstrued.”

So what is happening with religion?

The answer is still up for interpretation, but no matter what is happening, religion in general is not the same as it was a few generations ago.

Barton said she believes students are seeking support in their faith differently than they have in the past. She says this generation is called the first “post-communal”generation, which means that the current culture is very individualistic. The support that students want may not be found in Sunday morning church, but could be found through small groups.

“When people say they are spiritual and not religious, they are saying they want something deeper that matters for their religion,” Barton said.

People may be seeking out their faith in different ways than they have in the past, changing the traditional practices Christianity holds.