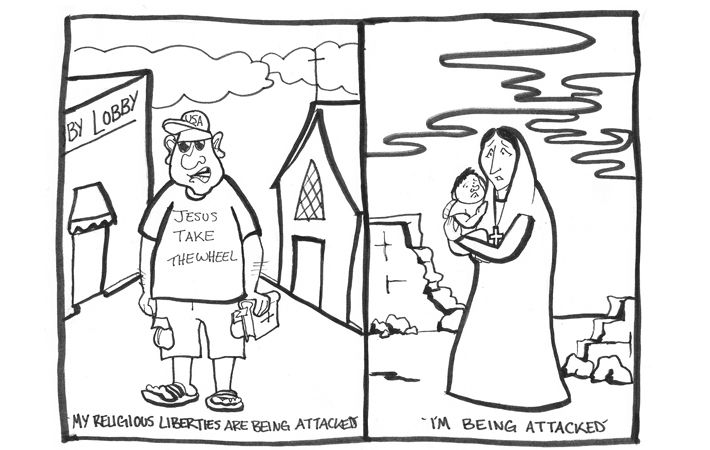 The killing of 12 Egyptian Christians on Feb 15 by fanatical Islamic militants inspired disgust and fury in the hearts of decent human beings everywhere.

The Islamic State and their allies had terrorized thousands before, but we may pause and scratch our heads at their rationale for this particular atrocity. They claimed slaughtering the 12 innocents on a beach was a vengeful strike against the “Nation of the Cross” (i.e. the United States), and apparently chose the seaside location to parallel the assassination of Al-Qaeda’s Osama bin Laden, whose corpse was dumped into the ocean.

In reality, Egyptian Christians were just the most convenient target for releasing some aggression. It’s quite strategic, too, as it sends a powerful and gruesome warning to those Christian minorities who might stand in the way of the regime. But how strange it is that they call America the “Nation of the Cross”: the archetypal Christian nation.

Partisan distortion aside, I think history is clear on the point that the founders never intended America to be a Christian nation — look up the comments of the unbelieving Jefferson, Washington, Adams, Franklin and Paine on Christianity and the Bible if you doubt this. Nevertheless, you’d have to live under a rock not to realize how Christianity is incredibly interwoven with American history and culture. Secular liberalism notwithstanding, Christians in America still maintain far more political power and material prosperity here than the vast majority of their fellows in the rest of the world.

Yet, you would never know it from some of the rhetoric that’s thrown around. Will same-sex marriage be the last straw that brings about the End of the World? Maybe, assuming that would make God angrier than the Holocaust or the Rwandan genocide did. Are Christians quickly becoming a persecuted minority in the land of liberty? Not as long as 73 percent of Americans claim Jesus as their savior (according to a 2012 report by the Pew Forum on Religion and Public Life). There are more Christians in the U.S. than there are Jews in the entire world (210 million versus an estimate of 13.9 million by the American Jewish Yearbook). Secularists have plenty of clout and media influence, but the numbers are not on their side.

Every American Christian should remember that their religion grew up in a completely different world. Those first persecuted congregations were mostly slaves, foreigners and poor folks living on the edges of society. Now some of the richest and most powerful go to Sunday services. One therefore might expect Christendom to naturally be an advocate for the rights of those marginalized by society today and to promote the toleration it was originally denied. In this regard, Christian culture has largely failed.

It may be worth repeating that there are many in this country who do not feel as accepted as the Christian majority. So-called “Jesus freaks” are a target of mockery, but unlike devout Muslims they aren’t automatically seen as allied with terrorists. On a similar note, for most conservative Christian politicians social justice for the underprivileged usually takes a backseat to worldly notions of economic liberty.

I saw a YouTube video taken this year of a group of Christians in Austin, Texas protesting Muslim Capitol Day in their city, complete with shouts of “Jesus is Lord!,” “Go home!” and “Your prayer means nothing!” It occurred to me as I listened that the protesters had little interest in spreading the Christian message. Had it been so, one might have expected them to be handing out gospel tracts and asking the Muslims if they’d “heard the good news”. What they seemed more concerned with was maintaining a comfortable status quo. But harassment and exclusion looks the same whether it’s in the name of Jesus or Mohammed.

It might be very uncharitable, however, to blast this straw man while ignoring the many who are not aligned with it. Most churches that I’ve been in regularly thanked God for the freedom of religion we find in this country. Perhaps some do it even more now that Christian persecution abroad is on all of our radars.

Meanwhile, history repeats itself as thousands of Christians from Iraq to Nigeria are currently serving as punching bags for the brutal and depraved. Young girls are being kidnapped, forced into marriage and raped. Whole communities are being driven out or subjugated. If America’s Christians want to take a stand against this insanity, they should not lash out at or turn a blind eye to the minorities around them. They ought to show the world how a truly tolerant and pluralist society works: to do justice to the poor and marginalized, and work to help their brothers and sisters all over the world.