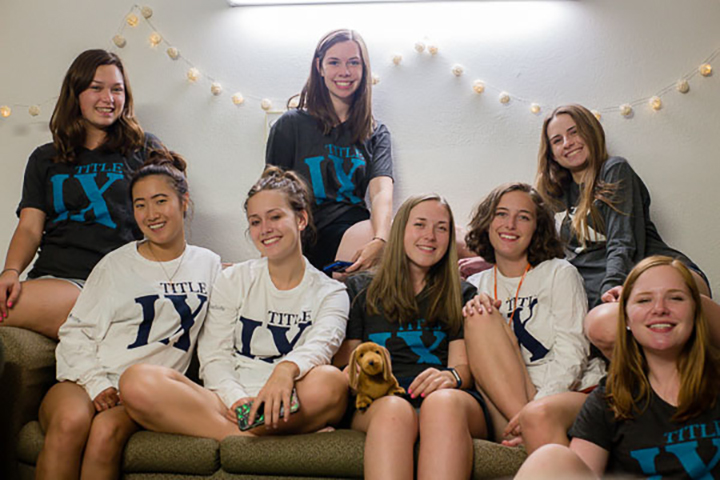 Alaina brought the suite together in May of this year. Being the social butterfly and top scholar she was, she made sure she had her roommates picked out ahead of time. She was so excited to decorate — coming up with ideas for tissue paper states and buying Lauren and herself matching bedspreads.

Alaina was a person who jumped right into things. The first day of NSO she marched into DeBell, Coffee Bean mocha in hand, ready to take on the year. We all knew from the moment we met her that this was a girl with a big heart and a fast mouth.

She claimed to be anti-social, but her constantly buzzing phone would tell you otherwise. She loved staying connected to us, even if it meant sending memes at 1 a.m. when the rest of us were asleep. As soon as you were friends with Alaina, she didn’t let you go. Shafer F suite can attest to that — one My Tie date and a group chat later and Alaina became crazy close with all of those boys.

Alaina was a major mom friend. If any of us were sick or needed coffee or a snack, she was the first one to offer to help. If Lauren, her roommate, ever left her key in their room, which she did often, Alaina made the trek across campus to deliver it with a smile (and a mild scolding). She was exceedingly kind, even when we got on her last nerves. She loved each of us for who we are and didn’t expect anything in return.

But as much as she was our mom, she was open to any and all advice we gave her. She would ask our opinions on whether or not to buy clothes online or if she should buy another pint of ice cream or more coffee. Our advice was almost always no, at least in terms of clothes and ice cream, but she never heeded our thoughts on more coffee. She was open, earnest and willing to offer her thoughts and constructive criticism, and — most of the time — listened to the advice she was offered in return.

Alaina constantly made us laugh, but she laughed at herself as well. She was the first to admit that she’s not always the brightest candle on the table, but that never slowed her down. She never got upset that she made a mistake, and she’d often laugh right along with us. In her own words: “I’m a little annoying a lot of the time.”

She loved taking photos of the group, with or without us knowing it. You had to be careful of what you said or did because you never knew if it was going to end up memorialized in Alaina’s Snapchat memories or stories. But she’s the one to thank for all of our great Instagram posts because she’d be the one to stop and remind us to take a selfie.

She was a fantastic listener and was known for her willingness to be there. Whether it was boy problems, class difficulties or family trouble, she made an effort to really listen and give any advice she could offer.

She enjoyed quality time with people, no matter what it was. She’d be the first to propose getting a midnight snack, typically a pint of Ben & Jerry’s from the HAWC, and made sure to invite everyone. She was the first one to agree to grab a meal with you, no matter what her schedule looked like or if she was hungry or not. She would even sit with you late at night in the suite just because. She didn’t need a reason to be with you — being with you was enough.

Alaina never ran out of things to say, even when you weren’t sure why she was saying it. She was full of funny stories, silly jokes and snarky remarks and she knew it.

Her loving, easy-going and accepting nature made her ready for any adventure like a 21st Night of September party, a trip to the Getty Villa, Coffee Bean runs, movie nights and pizza dinners, proclaiming “Oasis is always good!”

Alaina was our friend, suitemate and sister in Christ. She was bold in how she lived and how she loved others, and we want to honor that legacy. Alaina truly cared for people, no matter who they are, and we want to continue that vision with Alaina’s Voice.

Alaina’s Voice is a nonprofit designed to unite people of all backgrounds and beliefs to join as one against gun violence. We will not watch as victims of gun violence fade into the background, forgotten behind those who commit these acts. Alaina’s Voice demands more, that we speak up for those who cannot and promise to remember them as more than just a name.

Just as Alaina brought the eight of us together as a suite, her voice — a voice of song, voice of strength, voice of spirit and voice of change — has the power to bring us together in the wake of tragedy.

Alaina Maria Housley is not just a headline. She is one-eighth of us.

Students Respond to the 307th Shooting

Uncovering the Biology Behind the Woolsey Fire 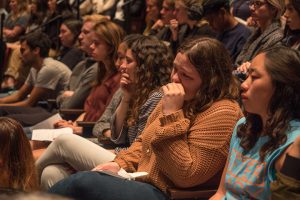 Students Respond to the 307th Shooting

Photos By Kaelin MendezThe Borderline Bar and Grill mass shooting was the 307th mass shooting in America within the past...
Copyright 2013 Jupiter Premium Magazine Theme
Back to top