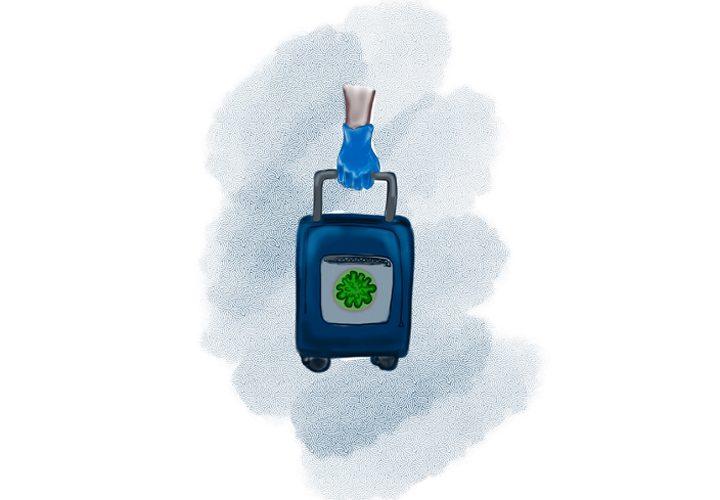 After months of planning for Pepperdine’s Buenos Aires, Argentina International Program, COVID-19 forced me to abandon my hopes of studying abroad.

Hundreds of other IP-bound students at Pepperdine were also preparing to study abroad since November 2019, but we understood the program had to be canceled in the midst of the pandemic. Throughout the remaining spring semester and summer, I mentally prepared for the uncertainty of the fall semester.

President Jim Gash and Dean Michael Feltner’s July 22 announcement of the online semester provided space for ideas of what I could do with my time. The idea to study in South Korea sparked. Throughout college, I felt the constant nudge to reconnect with my South Korean heritage and learn about my cultural roots.

During this global shutdown, South Korea was receiving international praise for its success in COVID-19 containment, and it was much safer to live there than in California. The online platform and asynchronous options made this idea viable. After endless discussions with my family about the trip, I decided to take a bold step and create my own abroad experience in South Korea.

Before packing my bags and departing for Seoul, South Korea, I prepared by researching the quarantine procedure and other individuals’ experiences in South Korea during this pandemic. I also studied how I could best prepare for solo travel.

I created a flexible itinerary, booked my flight, arranged my post-quarantine housing and figured out my phone and health plans. I could live in South Korea for 90 days, visa-free, as an American citizen. No matter how much I prepared, however, I could not have fully predicted my South Korea journey.

I arrived at the Los Angeles International Airport on Aug. 16 and waited about 15 minutes to check in my luggage and receive my boarding pass. My family and I exchanged goodbyes, and I made my way toward the terminal, anticipating this risky journey on my own. 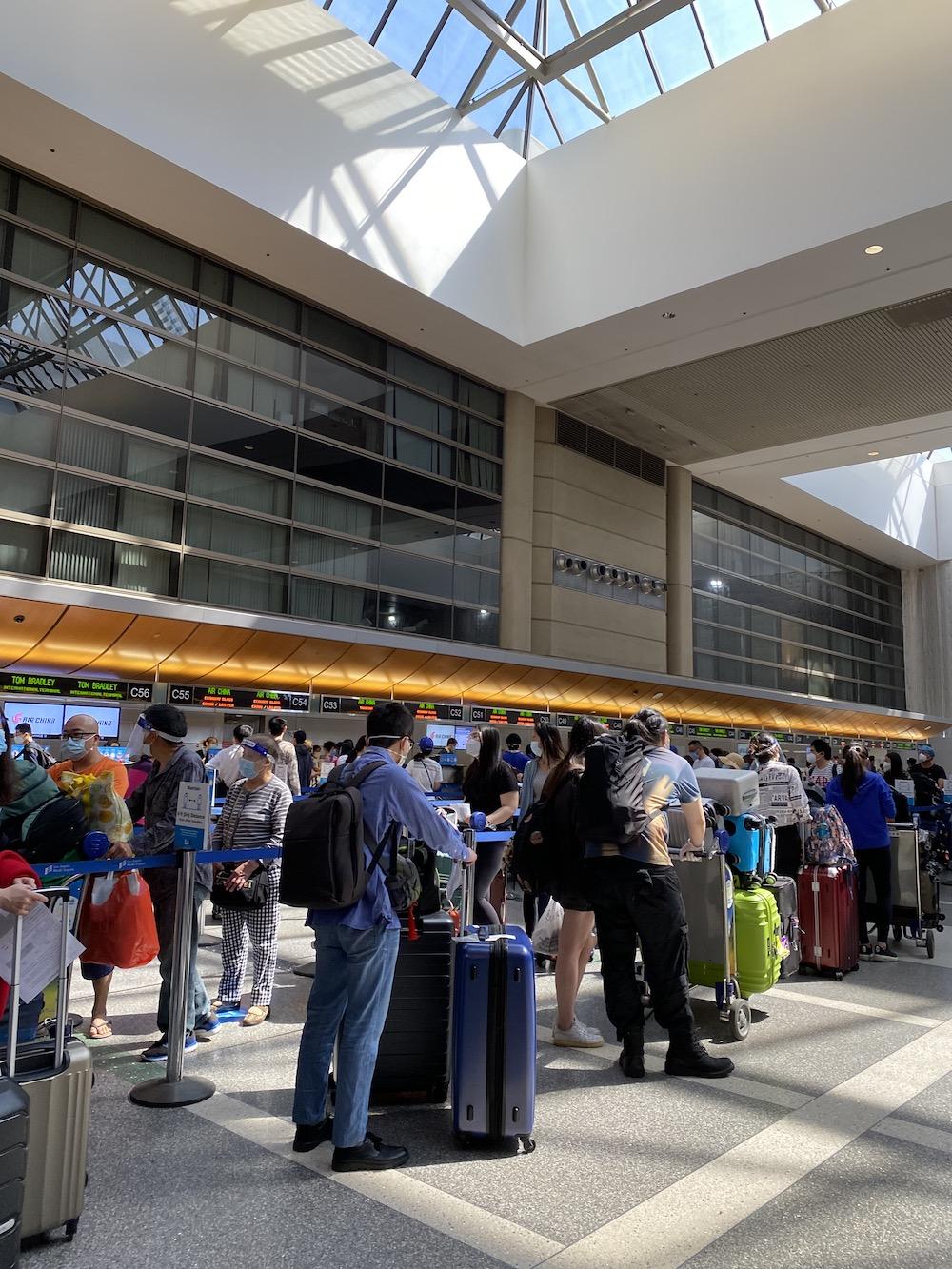 Travelers stand in line with their luggage inside the Los Angeles International Airport on Aug. 16 at 10:35 a.m. They waited to check in their suitcases and receive their boarding passes.

After passing through security, the rest of the airport was relatively quiet and nearly all of the stores were closed except for the occasional Starbucks. Some travelers socially distanced while waiting to board at the airplane gate and others did not. Once I boarded the airplane, two female flight attendants greeted me. They wore face masks and white gloves along with light blue gowns that extended from their shoulders to their ankles.

During the 12-hour flight, I was able to rest, read books, eat a few airplane meals and fill out immigration forms. Surprisingly, passengers were not required to follow socially-distanced seating arrangements. Aside from the personal protective equipment, this airplane experience felt similar to any other flight. 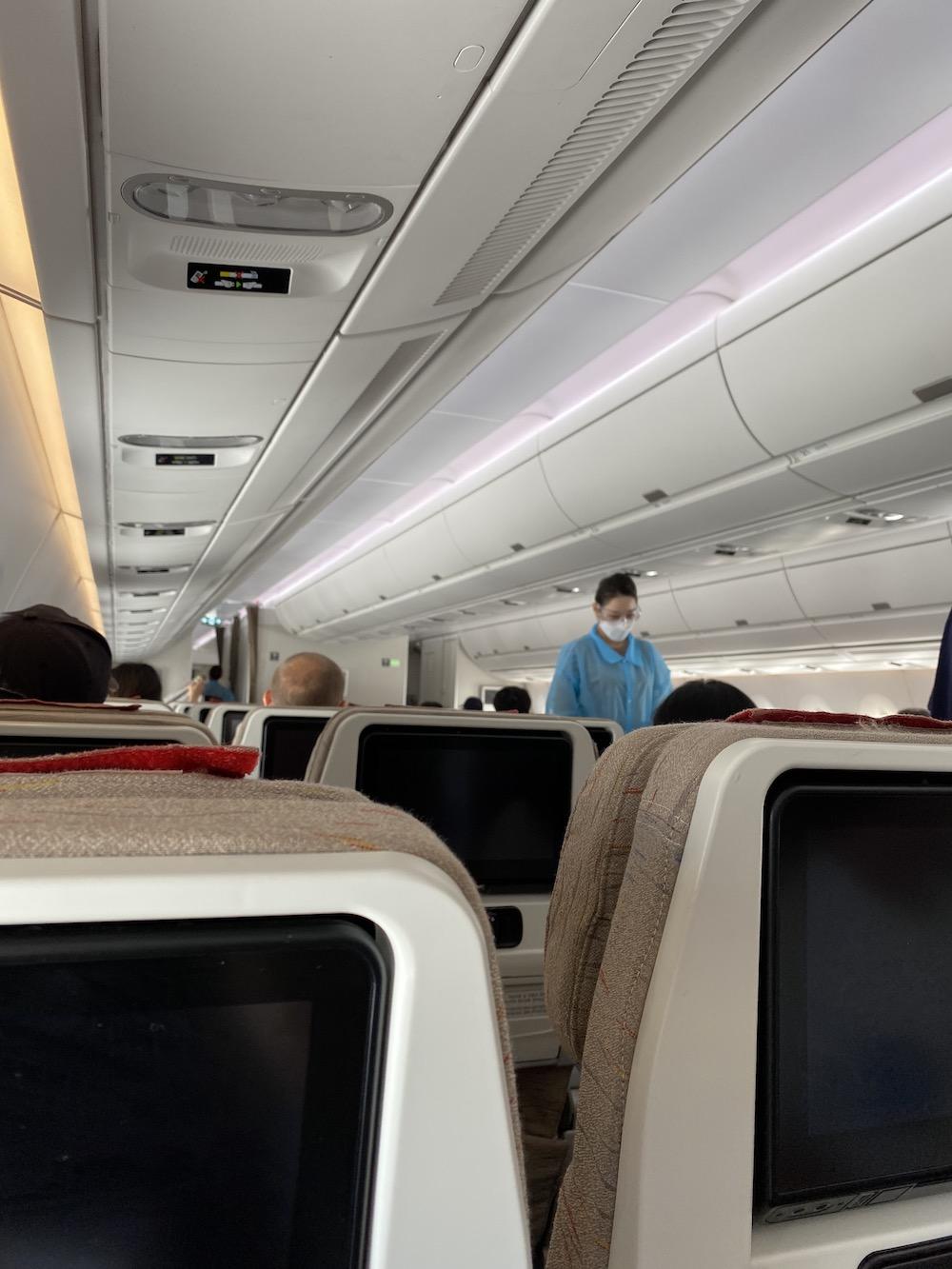 Flight attendants ensure passengers properly prepare for take-off. The biggest difference between this flight and pre-COVID-19 flights was the use of personal protective equipment.

After getting off the plane, I made my way to the first station, where I had to communicate in my broken Korean. I could speak the basic language but my talking and comprehension abilities stopped at the higher levels of Korean vocabulary. Signs and papers were mostly printed in Korean, and due to my physical appearance, the staff automatically spoke to me in Korean as well. I was aware that foreigners also traveled to Korea without being able to speak the native language, so I attempted to communicate in English each time but found little success and resorted back to Korean.

The first mix-up happened almost immediately. On one paper, the staff circled self-quarantine instead of government-quarantine. I tried to clarify that I would be going to the government facility, but we were unable to understand each other due to the language barrier. The staff member said I could figure it out at the next station, and he directed me to the next stop, where I was told I was supposed to arrange the quarantine housing on my own. 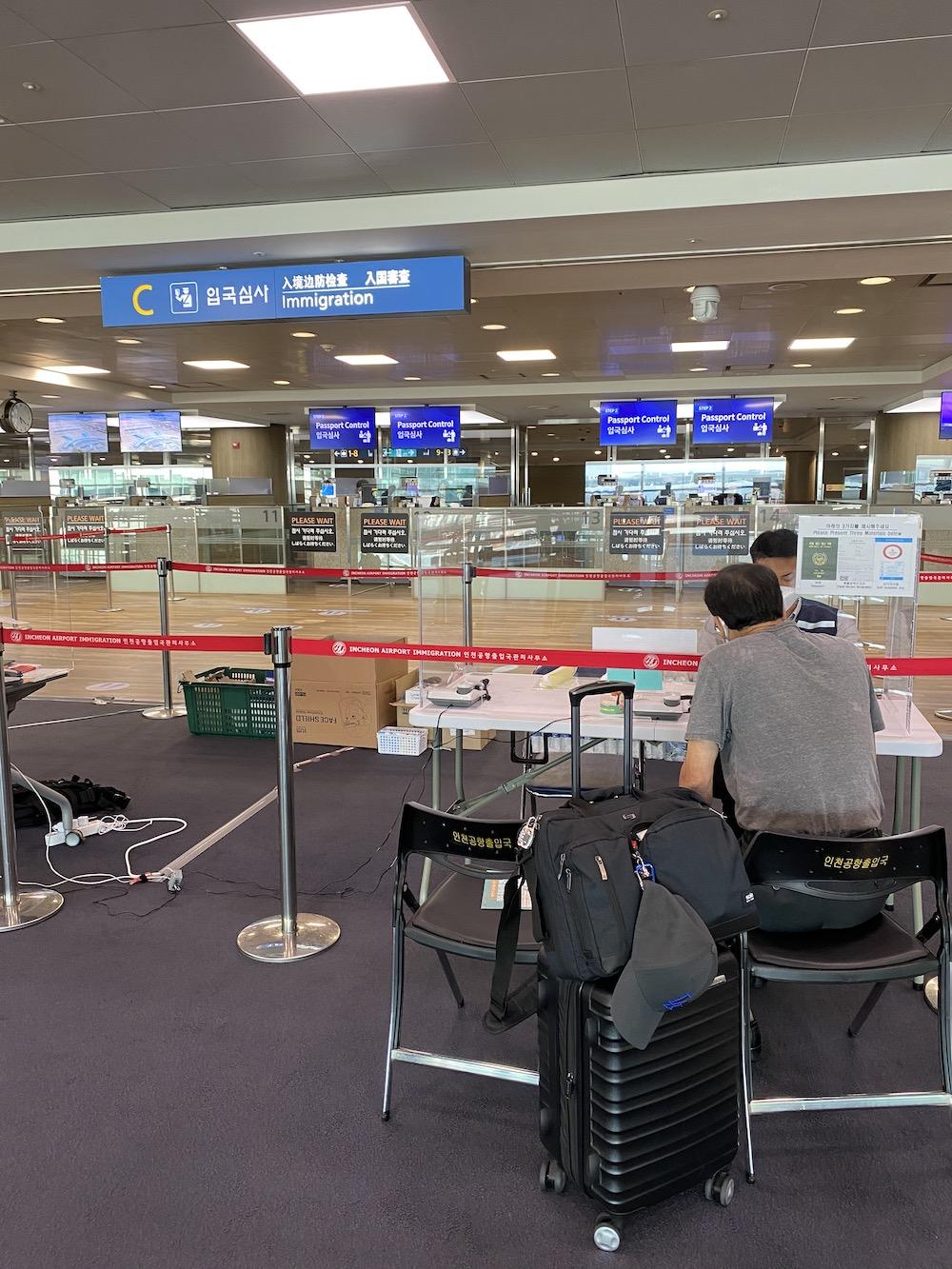 A quarantine-facilitating official checks a man’s forms in the Incheon International Airport in South Korea. The man sat with his luggage at the second station at 5:20 p.m.

The staff didn’t seem to know how to effectively communicate with foreigners, as I encountered only one staff member who could fluently speak English. I went through five stations in the span of an hour as the staff continued to guide me to the next stations without clarifying my quarantine situation. These stations ensured I had all of my agreement forms filled out and that I was traveling to South Korea legally. I finally received a clear explanation at the sixth station, where I was told the government would arrange my quarantine housing.

Once I passed through the stations, I was devastated to find only one of my suitcases at the baggage claim. I was able to explain the situation in Korean at the help desk, and we later discovered that someone accidentally took my suitcase. We figured out a temporary solution, and a few days later, the suitcase was shipped to my government facility. With only one of my suitcases, I made my way toward the exit of the airport. 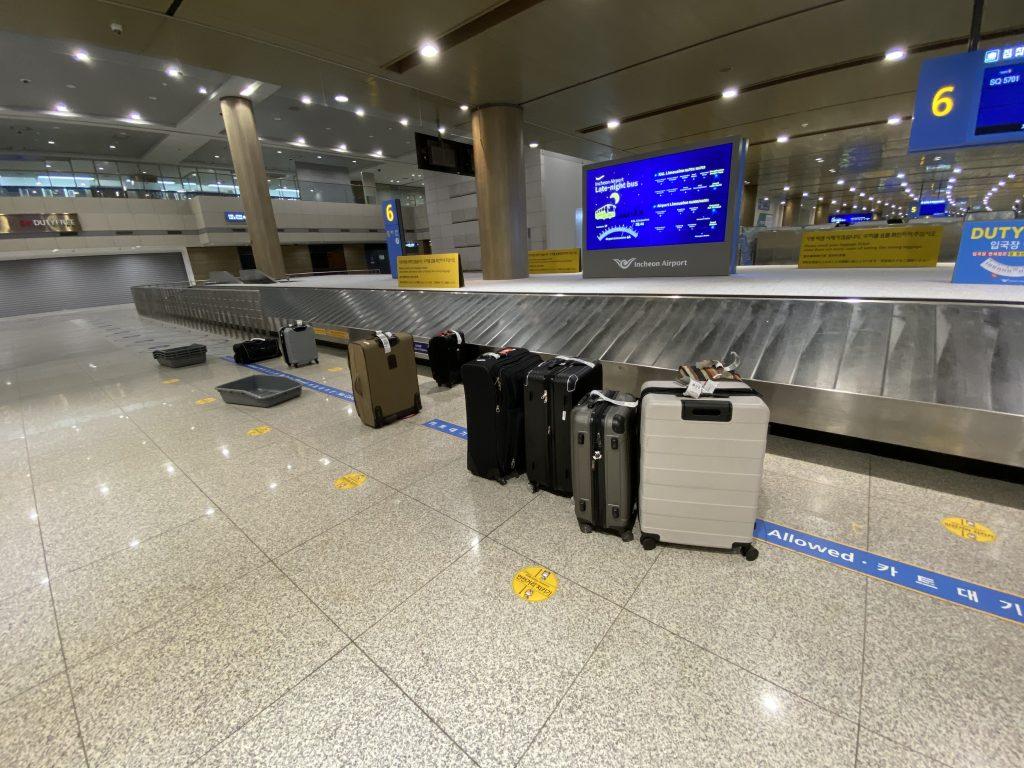 The leftover luggage from my flight remains at baggage claim. Nearly three hours had passed since I got off the plane, and I repeatedly checked each of these suitcases to confirm that none of them were mine.

Finally, I arrived at the seventh and last station where there was a designated translator who was the same age as me. I was surprised to find that some of the staff were this young and worked extended hours. After confirming in English that I would be going to the government facility, I was filled with relief.

The translator guided me to a waiting station, where I saw a group of both foreigners and Koreans. There were two to three staff members who were watching over the group to make sure they took account of every person who went to the bathroom or the store to buy water. If a person escaped or violated the COVID-19 protocol, the individual could be fined, arrested or deported. 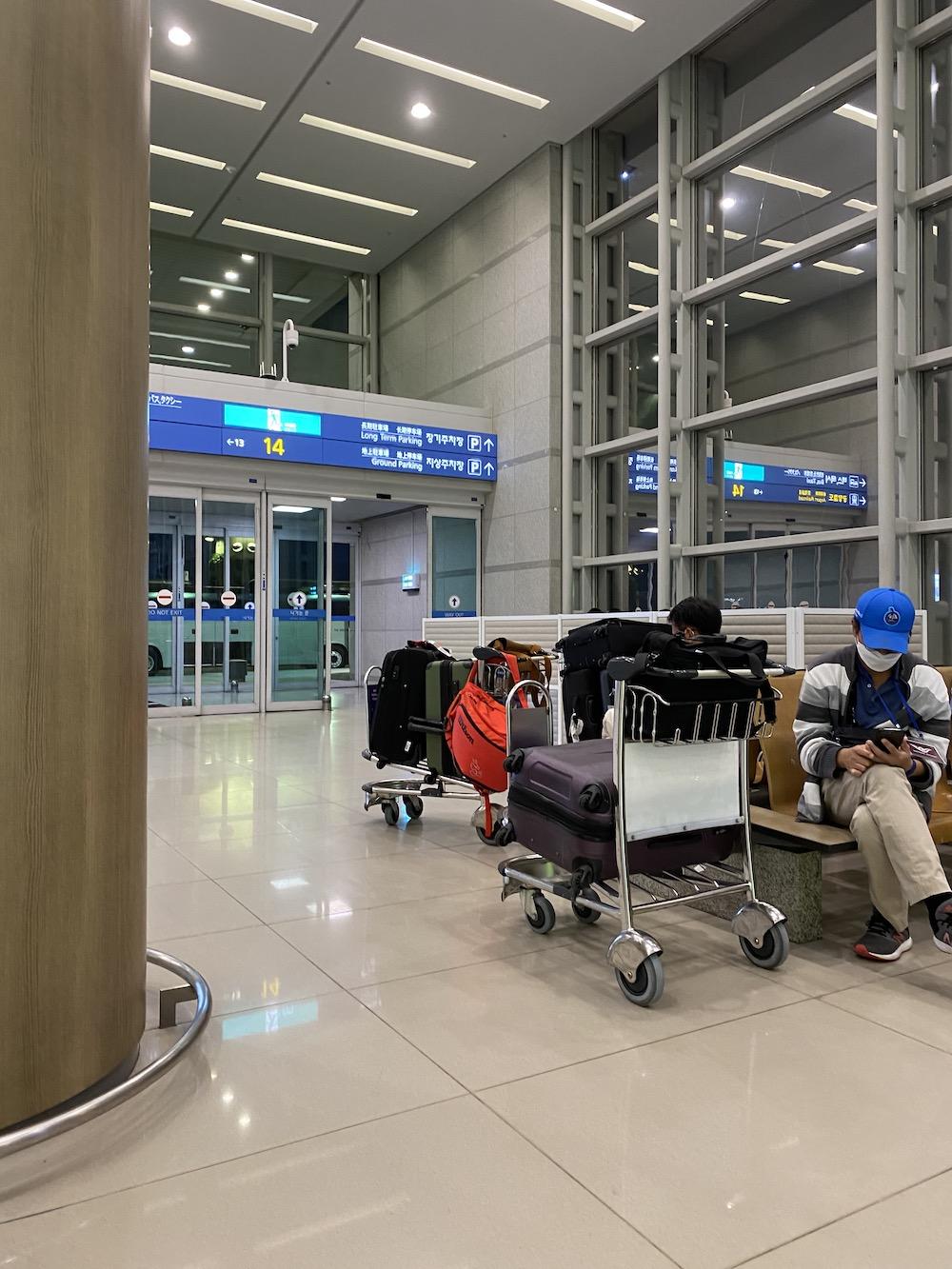 Two men wait with their luggage for the government-provided bus at 7:50 p.m. The bus took our group from ICN airport to the Benikea Hotel in Seoul.

I expected the hour-long bus ride to be in utter silence with occasional snores, but it was filled with conversations. I was seated near two university students who had recently graduated high school in America and were also traveling to study abroad. A couple of others were visiting their families and some were traveling solo. These interactions opened my eyes to the reality that life was still moving on in the rest of the world despite the restrictions of COVID-19.

The government facility was an ordinary, three-star hotel designated for foreign travelers in quarantine. There were tables arranged in the lobby where I filled out a couple of quarantine-compliance forms, got tested for COVID-19 and paid for my quarantine food and stay. After, I was directed to my room where I stayed for 15 days. 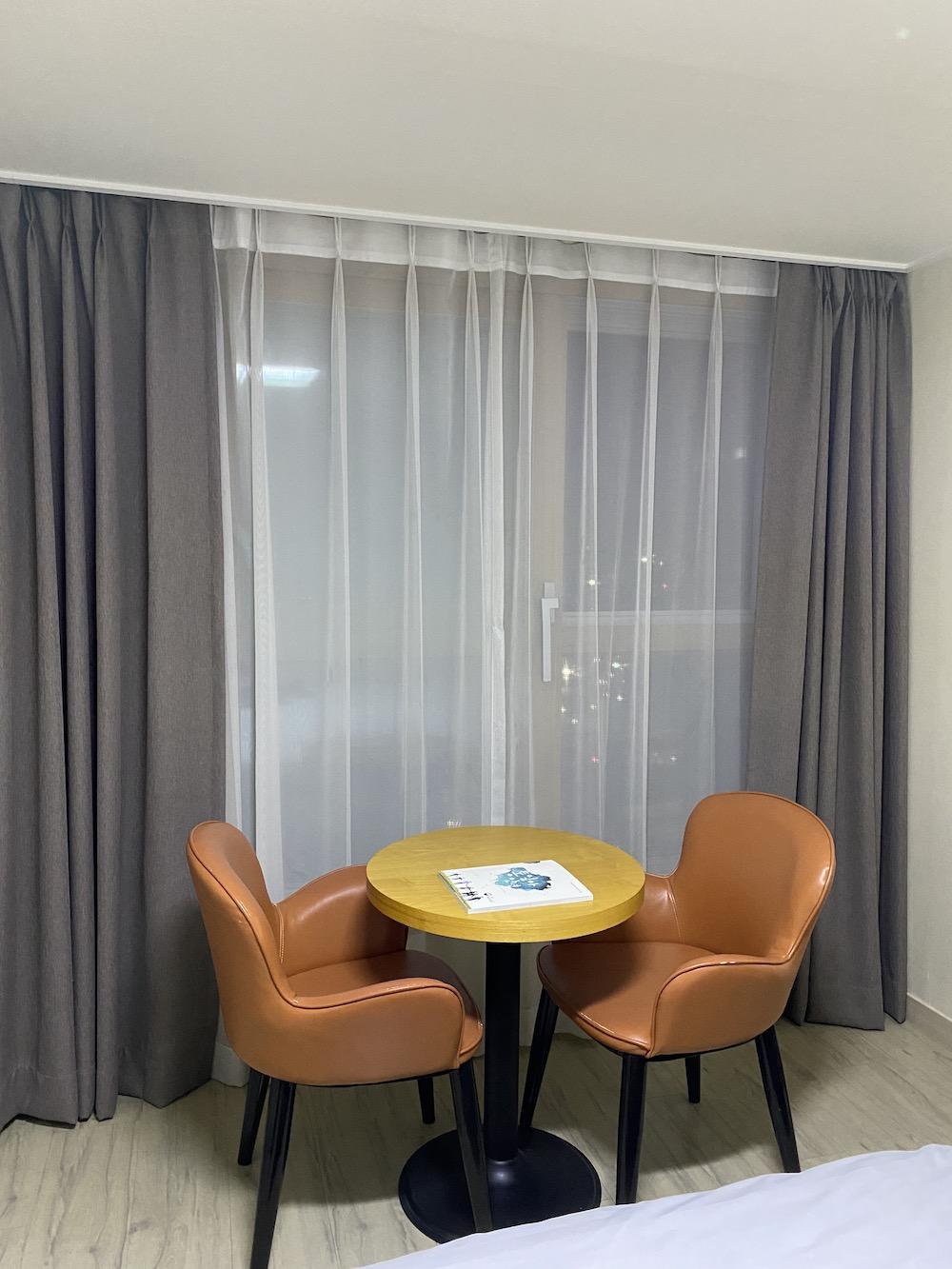 The hotel room for quarantining foreign travelers shows a view of the city’s night traffic behind the window curtain. I entered the hotel room close to 10 p.m., which was approximately six hours after my plane landed.

The room was designed for two people, but there was not much space to walk around since two beds took up the majority of the room. The government provided a bag of Korean snacks and a few other essentials, including a bar of detergent, a drying rack, cleaning spray and extra toilet paper rolls.

The hotel’s public address system announced meal delivery three times per day. As soon as I heard the delivery announcement, I picked up the meal from outside my door. The proportions of the meal were a bit too much for my appetite as breakfast, lunch and dinner each contained a heavy balance of protein, vegetables, meat and dessert. I was able to request a fruit tray in exchange for my normal breakfast tray, which helped balance out my daily intake. 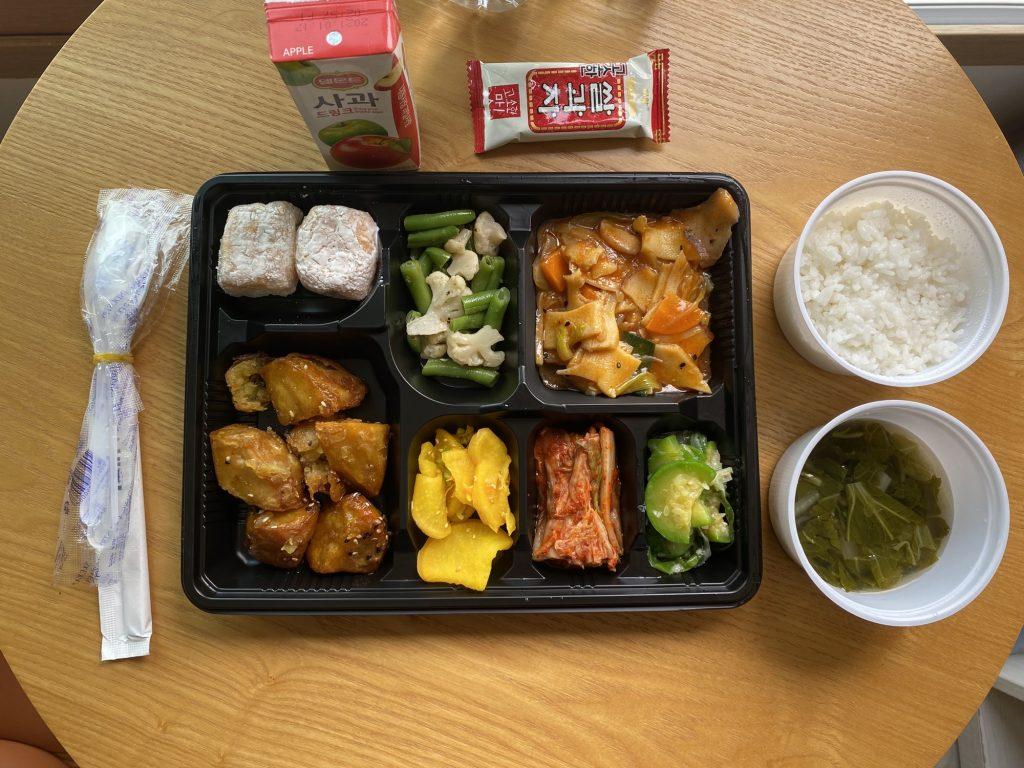 Each hotel-provided quarantine meal includes a side-dish tray, bowls of rice and soup, a snack and a beverage. I disposed of each meal in the plastic bag it came in, then placed the three plastic bags in a large biohazard bag and finally placed the biohazard bag outside my door before 7 p.m. each day.

There were some days when I had to stay up late or wake up early to adhere to the Malibu schedule, but it was endurable. Due to my community at home, I felt supported on this journey and my mental health remained stable. I opened the window many times throughout the day to feel the humid air and hear the sounds of Seoul. It was an interesting experience, but I hope I will not have to go through it again.

On the fifteenth day of quarantine, I checked out of the hotel at 6 a.m. and rode on the less-chatty charter bus to Seoul Station.

Throughout the bus ride, I mentally prepared and prayed over my independent time in Seoul. I wondered if I would get along with the Korean natives in my new home, how the spiritual community was holding on and how the COVID-19 situation would impact my time in South Korea. No matter how much I pondered, however, going out and experiencing the world was quite different from what I imagined.

Although I lost the chance to study abroad in Argentina for a full year, I found a different path that led to South Korea. Being able to study abroad during this time is a priceless privilege, and it is one that I hope to not waste. 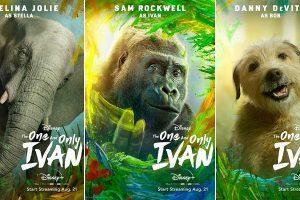