Abroad in South Korea: Taking a Trip to Busan 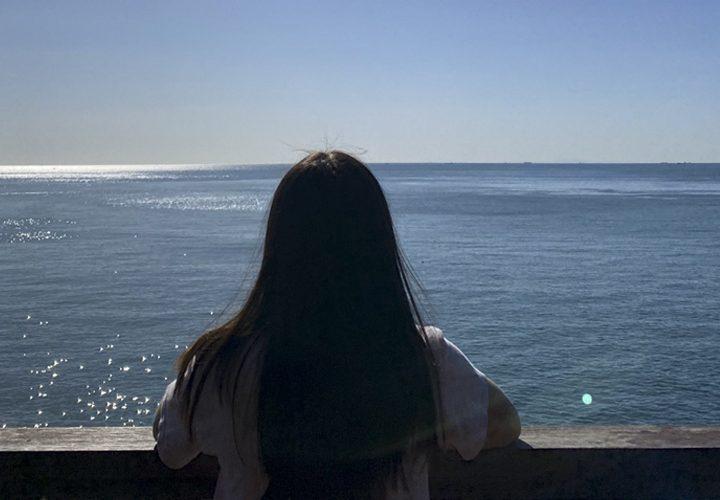 I look out to the ocean from Dongbaeksom Island durning my trip to Busan, South Korea, on Oct. 5. This trip to Busan was a nice break from the bustling city of Seoul.

My first month out of quarantine flew by. I became accustomed to the public transportation system and somewhat adjusted to independent living while taking online classes, but I needed a break from the hustle of Seoul, South Korea. I decided to take a trip to Busan to reflect on my time abroad and rest from the fast-paced city life.

Busan is the second-largest city in South Korea, and it is located on the opposite side of Seoul. I booked a one-way train ticket for around $25 USD from Seoul to Busan. I later found out flight tickets on airlines such as Jejuair and T’Way are much faster and cheaper than a train, with rates less than $10 USD, so I used this method on my way back to Seoul. 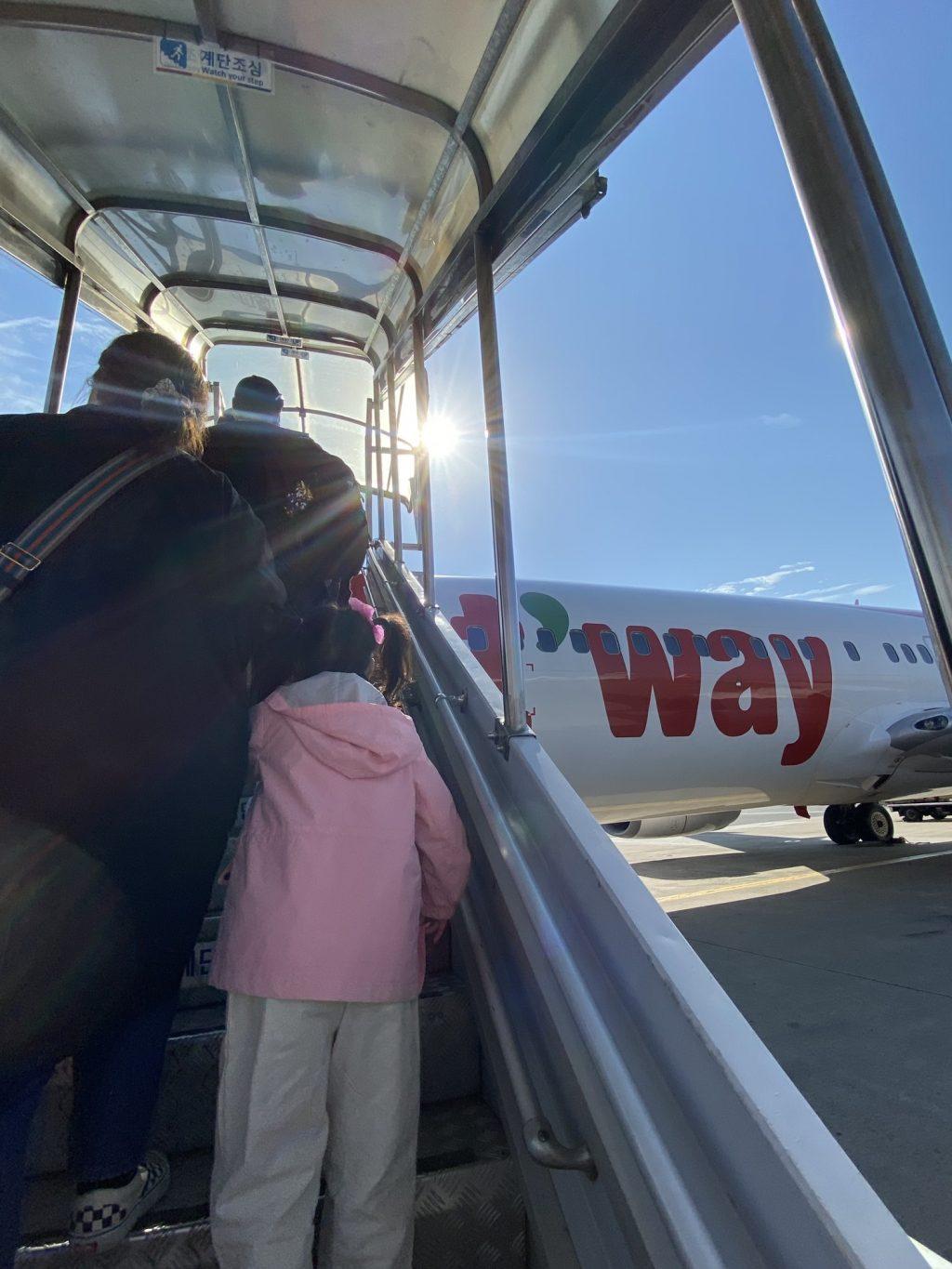 The first destination I visited in Busan was Haedong Yonggungsa Temple. I saw people perform rituals and pray to the Buddhist statue for various purposes, including good health and successful academic studies. Buddhism is now the second most popular religion in South Korea, after Protestant Christianity. 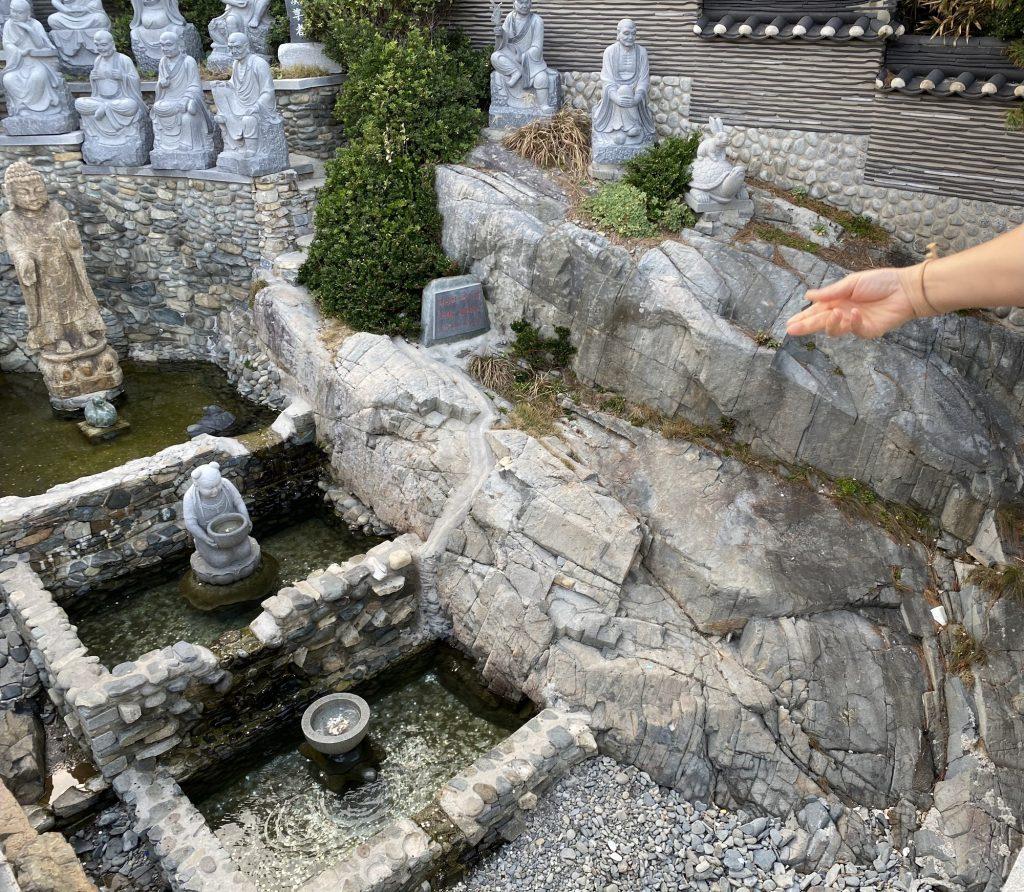 A woman throws a coin from a bridge into the Lucky Wishing Well at the Haedong Yonggung Temple on Oct. 3. Many families with children were at the temple, possibly because I visited the day following Chuseok's three-day holiday celebration.

After eating dinner and making my way to Haeundae Beach, I excitedly watched people spark fireworks in the night sky. It was surprising to learn that anyone could purchase fireworks from a street vendor and light them on the beach. 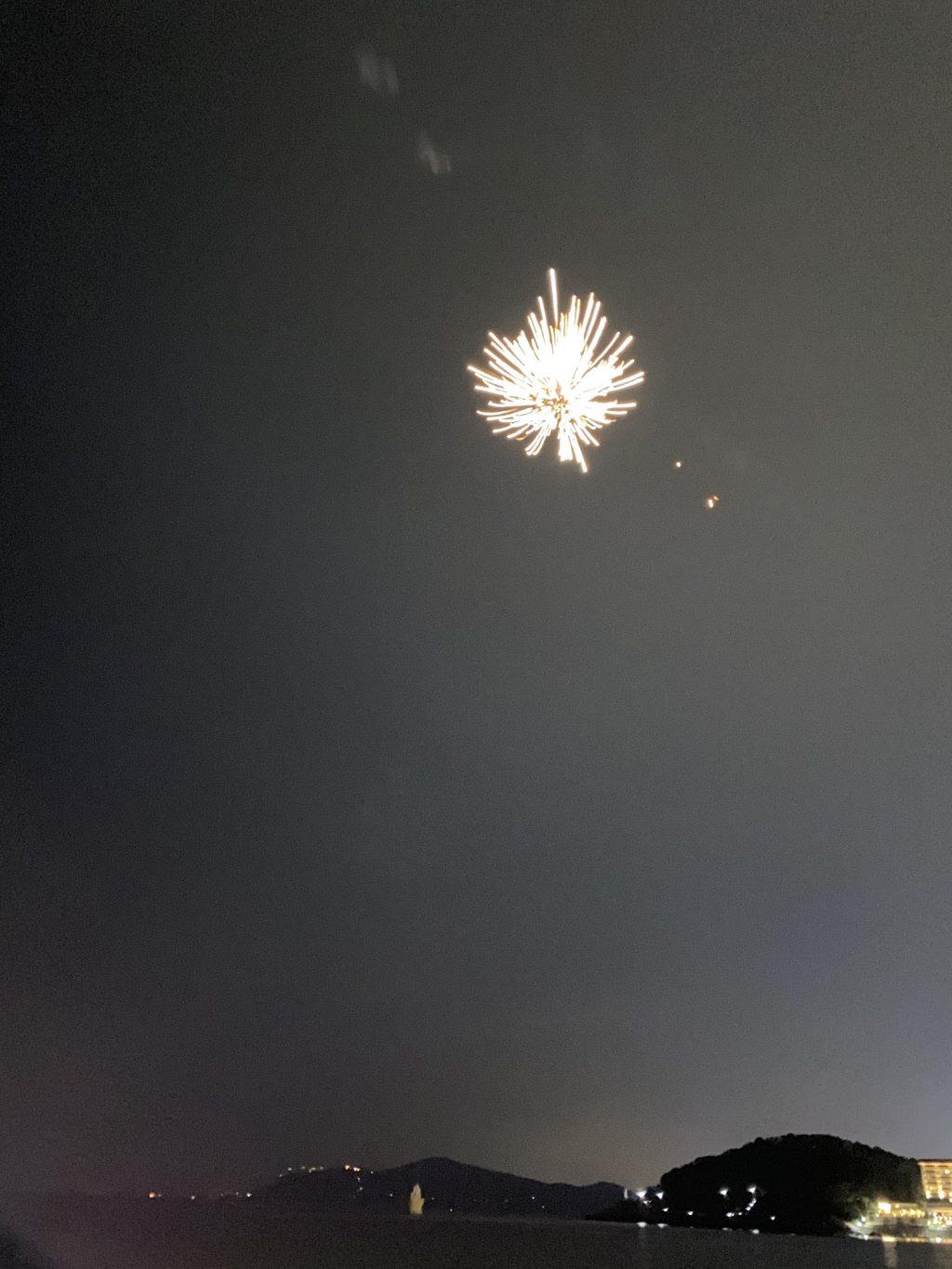 A firework lights up the night sky at Haeundae Beach on Oct. 3. Two firework sticks cost $5 USD, and each stick lit up around 30 small fireworks in the sky.

As I woke up to watch the sunrise at 6 a.m. the next morning, I saw three to four dozen locals swimming at Haeundae Beach. I learned from a Busan local that they had their swim caps and wet suits on for a monthly swimming activity.

Compared to my experience in Seoul, Busan locals seemed to have a much healthier lifestyle, as I saw many more people exercising outdoors.

Over the course of the next two days, I visited Taejongdae Geopark, Jeoryeong Coastal Walk, Gamcheon Culture Village, Jagalchi Market and Dongbaekseom Island. In addition to providing a breathtaking view, each site proved to be a special tourist attraction for its historical and cultural values to the nation and city.

A loop-shaped hike in Taejongdae Geopark allowed me to see various sights, including a lighthouse, sculptures, memorials and a small temple. The inside of the facilities were closed, but the crisp air was refreshing as I was surrounded by nature. I would definitely come back again for the ocean view and the five-kilometer nature hike with a packed Gimbap, which is a simple Korean meal made of cooked rice, dried seaweed, veggies and meat.

My favorite part of this hike was a small memorial that honored the Korean War in 1950. The war is also known as 625 (June 25) for the day the war began, and the memorial pays tribute to the countless soldiers lost in battle. 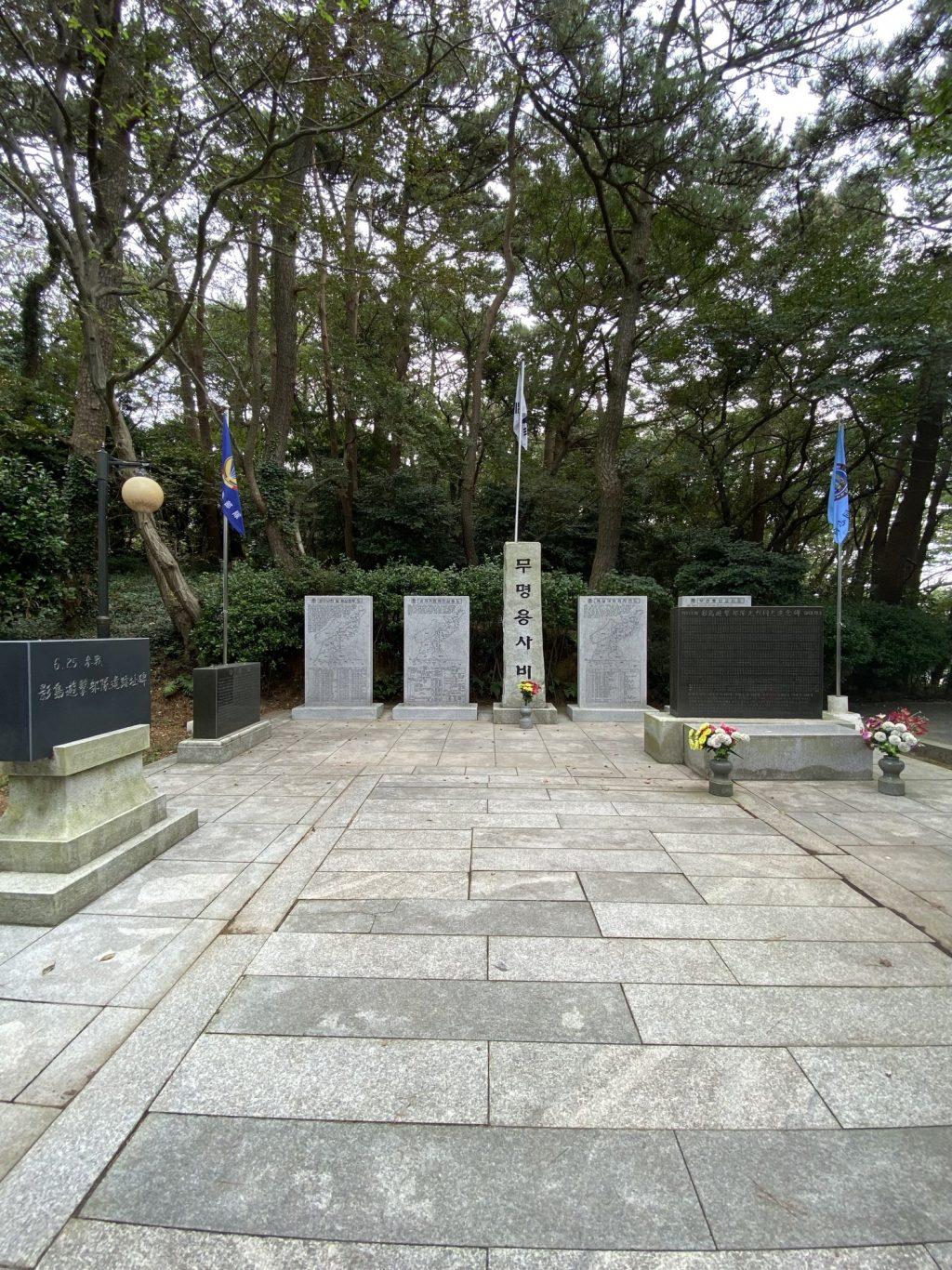 The tallest monument in the center reads "Mu-myeong-yong-sa-bi," which means unknown soldier at Taejongdae Geopark on Oct. 4. After visiting this memorial, I grew a deeper respect for the soldiers who fought for South Korea with tenacity.

During lunchtime, I walked by a street full of restaurants with similar menus. Several employees encouraged me to eat in their restaurants — a common practice in South Korea — and I chose a tasty Jjamppong noodle restaurant.

After lunch, I made my way to the Jeoryeong Coastal Walk, where I had a few heart-warming interactions with the locals.

A middle-aged couple asked my friend and me to take a few photos of them, and they shared tangerines out of gratitude. Later, when I climbed back up from a small wall that stood in between the path and the rocky shore, an elderly man was shocked at how easily I reached the top. He didn’t know I used an existing step to climb up the wall until I told him, and we shared a good laugh.

The fall weather in Busan was refreshing as the sun shined throughout the coastal walk and the sporadic ocean breeze cooled me down. The beautiful murals along this coastal walk provided a nice combination of the aesthetics of nature and art. 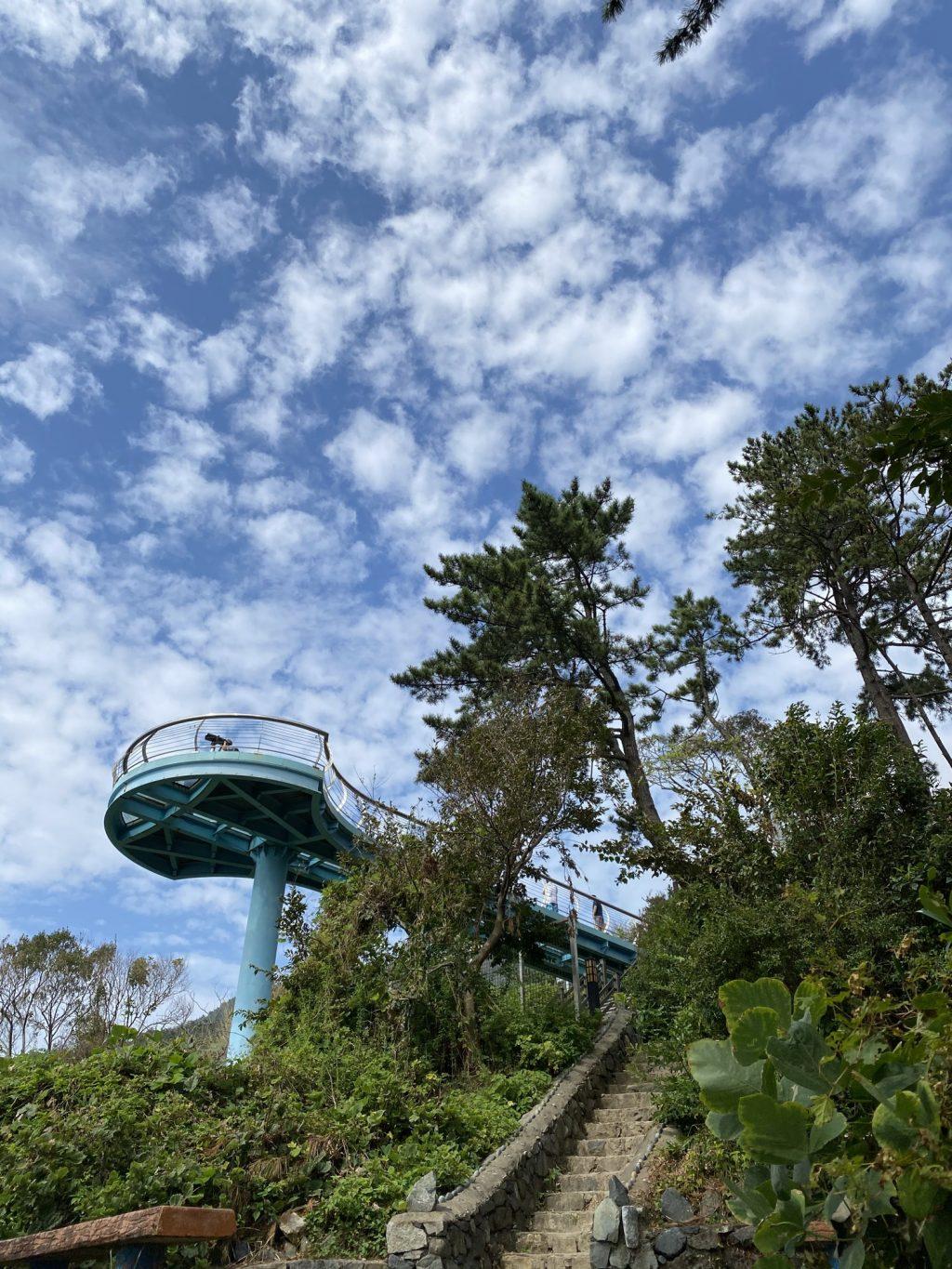 The Jeoryeong Coastal Walk provides hikers with a place to view the ocean and take pictures Oct. 4. The high skywalk against the beautiful sky and sparkling ocean provided a great view.

Gamcheon Culture Village was another attraction site that displayed the history of Busan. It was full of windy paths and stairs because the refugees had quickly built the town when they fled to this area during the Korean War. I visited in the evening when most of the stores were closed, and there were much fewer people than usual. 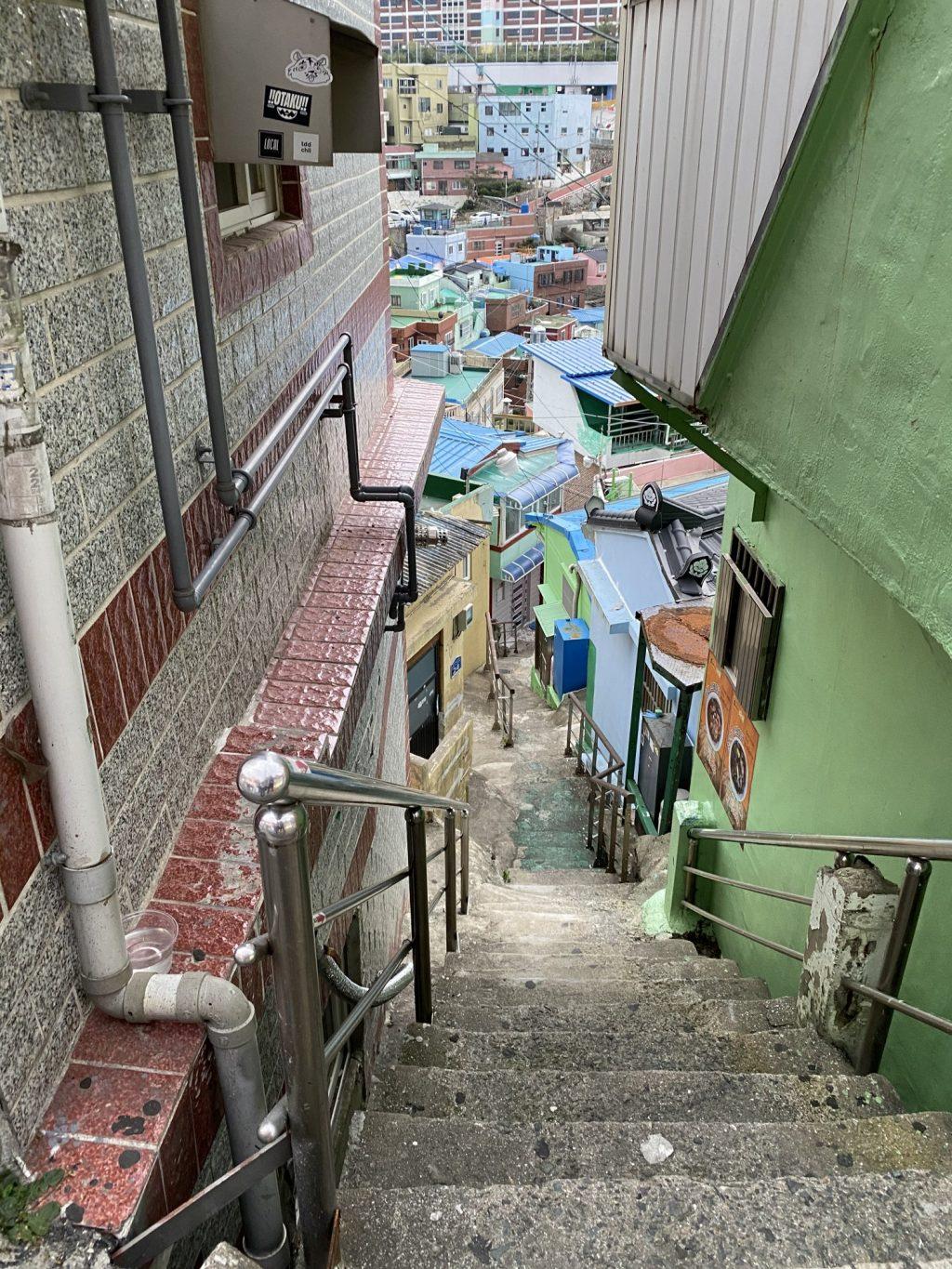 The stairs at Gamcheon Culture Village in Busan form a zigzag pathway with added handrails between colorful walls. Although this village is typically bustling with tourists and activities, it was much quieter and vacant when I visited Oct. 4.

I visited the Jagalchi Market, where seafood vendors formed rows from one end of the building to the other. Upstairs, customers could eat fresh seafood cooked in various styles.

As college students with unhealthy eating habits, my friend and I each bought a hotteok dessert before ending the day with dinner at a jokbal, or braised pork, restaurant. 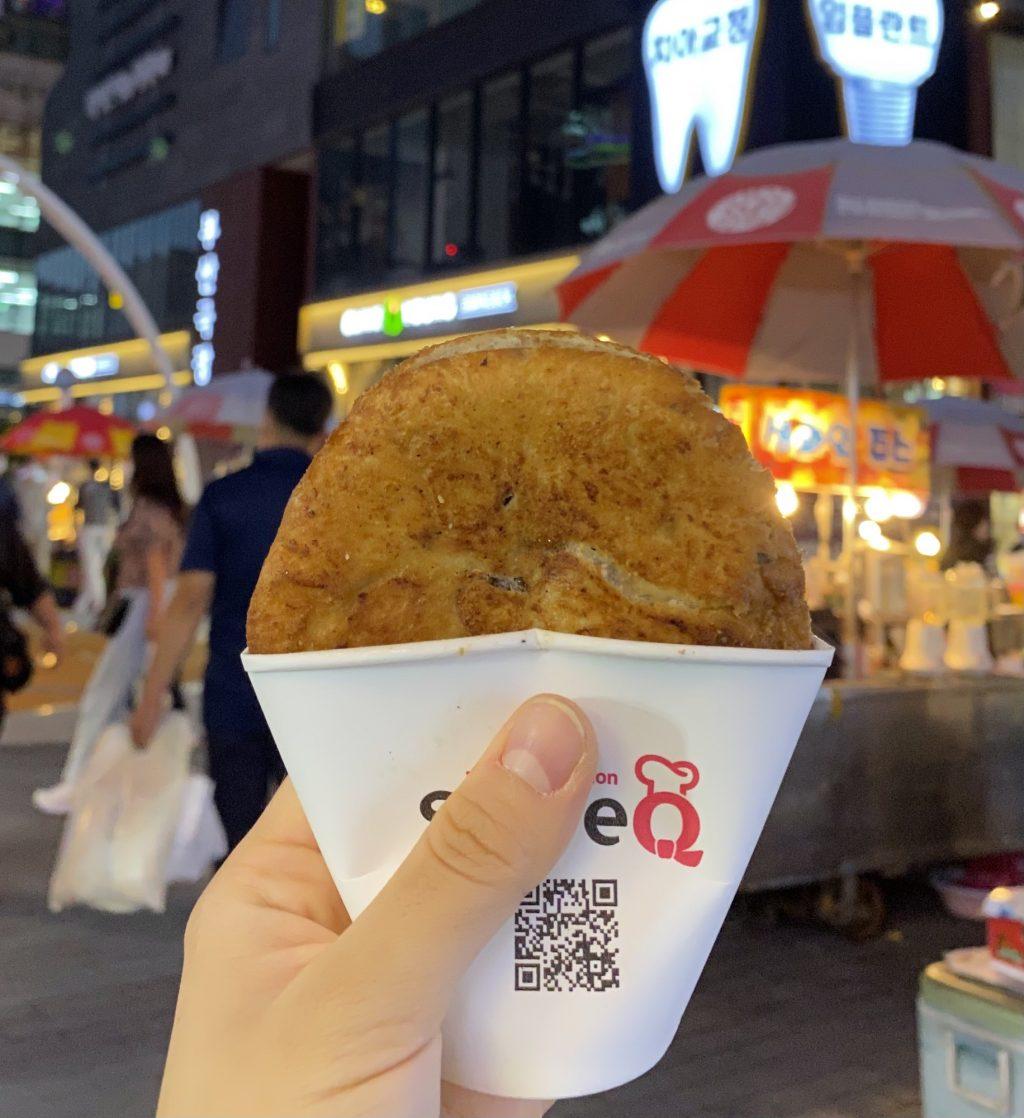 I hold a hotteok, a fried Korean dessert made out of dough, brown sugar and honey, at the Hirang Street Open Market on Oct. 4. Dozens of street food stands sold different types of Korean food at the market.

Early in the morning, I decided to take a swim at Haeundae Beach. The beach was much more accessible because Busan is a coastal city, while Seoul is surrounded by land.

After my swim, I made my way back to the hostel, where I showered, packed and checked out. On Dongbaekseom Island, I saw the active morning lifestyle of the Busan locals once again, as the island’s trail was alive with people at 9 a.m. 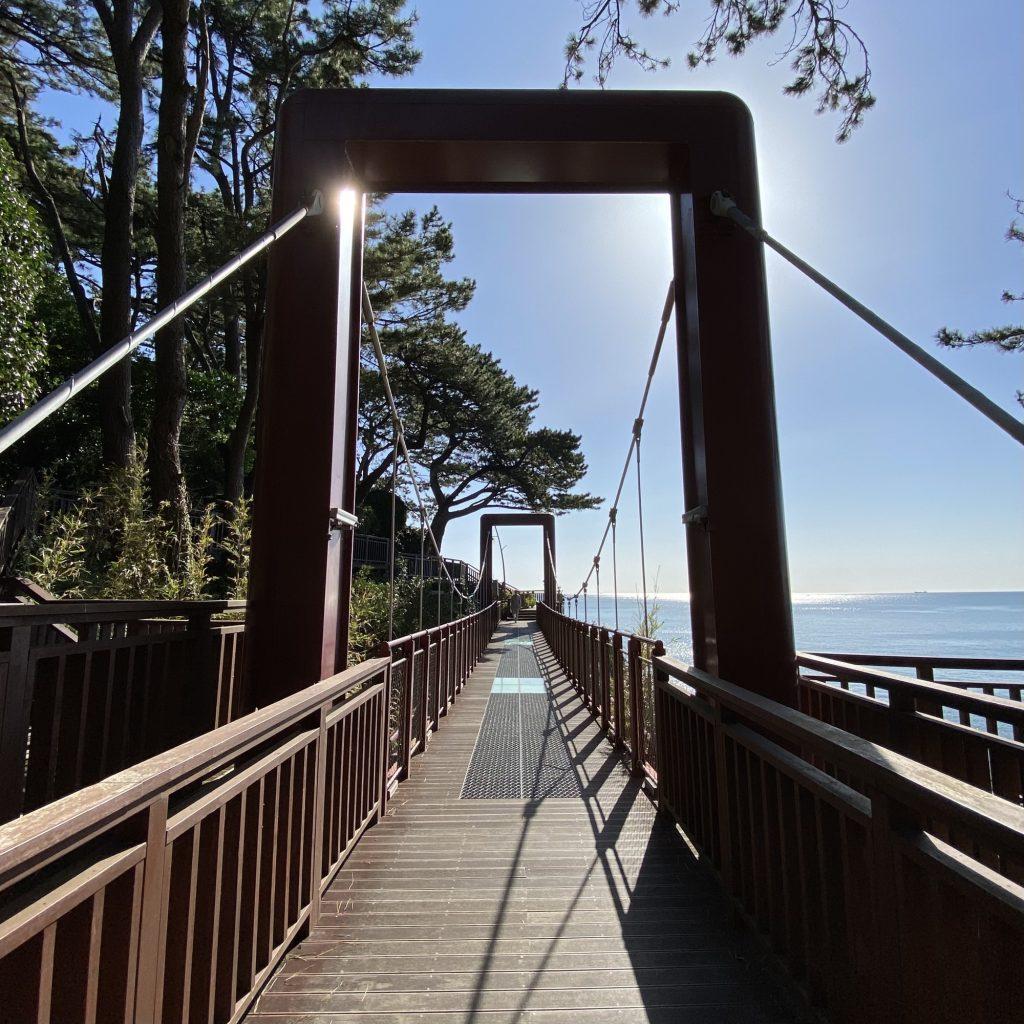 This mini suspension bridge at Dongbaeksom Island connects to a coast side trail that leads to a small lighthouse. At the end of the bridge, I saw Busan's skyscrapers on my left side and the vast ocean on my right side Oct. 5.

After my morning hike, I ate a delicious milmyeon dish — a food that has an interesting history with Korea and America. The milmyeon noodle dish originated in Busan during the Korean War, according to a KoreaTimes report. Lacking the proper ingredients for the original naengmyeon dish, a Korean war refugee substituted ingredients and used the accessible ingredients from a nearby U.S. aid supply base.

The dish became popular, but it remains indigenous to Busan. Various South Korean celebrities, such as Zico and Julian Kang, had their signatures posted on the wall of the restaurant I ate at, which shows how famous the milmyeon dish still is today. 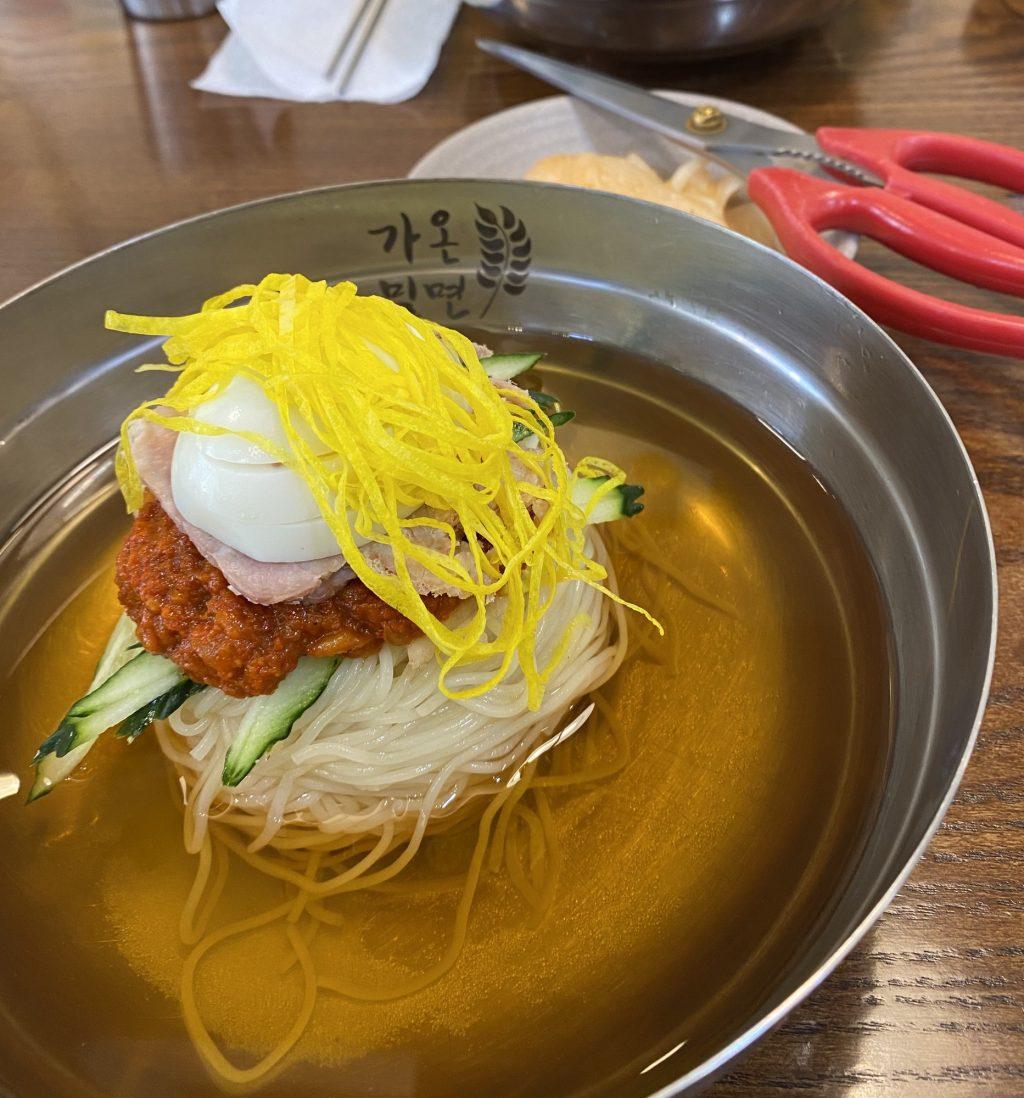 I ate delicious milmyeon soup, made with string-style eggs on top of a boiled egg, meat, spicy sauce, cucumber and milmyeon noodles, at Gaon Milmyeon on Oct. 5. This dish was typically served cold with a cup of warm tea or small soup on the side.

My trip to Busan allowed me to appreciate a bit of South Korea’s deep history while taking a break from Seoul. The views and slower pace of Busan allowed me to take a step back and reflect on my time abroad. I extended my stay in Busan by spending an extra week at a nearby persimmon farm through an organization called WWOOF.

My semester in South Korea is flying by, so I hope to cherish the remaining time I have in this country. 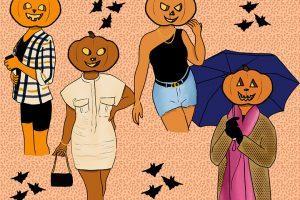 Art by Madeline Duvall Despite closures and restrictions due to COVID-19, fall fashion is still pushing forward this season...
Copyright 2013 Jupiter Premium Magazine Theme
Back to top