Abroad in South Korea: Experiencing the Second Wave in Seoul 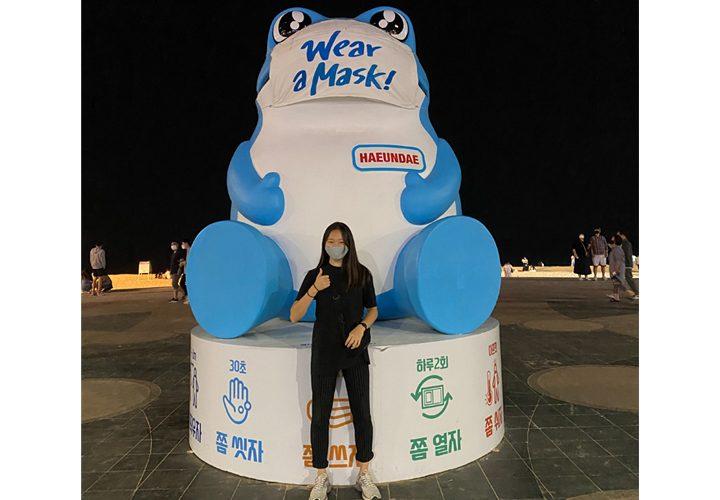 I stand in front of a frog statue that reminds locals to be COVID-19 conscious at Haeundae Beach in Busan on Oct. 3. The large frog portrayed COVID-19’s impact on social and public visuals.

The South Korean government has closely watched the COVID-19 outbreak while continuously adapting policies, which have altered the lifestyle of all its citizens to some degree. For over a month, I have witnessed the highs and lows of the pandemic’s second wave and how ordinary life has been impacted in Seoul, the capital of South Korea.

Back in May, the United Nations extolled South Korea for its exemplary COVID-19 containment. The containment success throughout the summer allowed the South Korean economy to thrive. COVID-19 cases, however, rose to high levels for the first time in five months in mid-August.

The second wave of COVID-19 became visible during my first week in quarantine, and the South Korean government imposed a level two social distancing regulation. This meant indoor gatherings of more than 50 people and outdoor gatherings of more than 100 people were banned. High-risk facilities, including museums, churches, libraries, karaoke rooms and nightclubs, were also shut down.

COVID-19 cases peaked around the 400 daily cases mark twice during my two weeks in quarantine. On the news, I saw civilian tensions toward the regulations worsen, and I thought that Seoul might be in a level three lockdown with even tighter policies when I came out of quarantine. 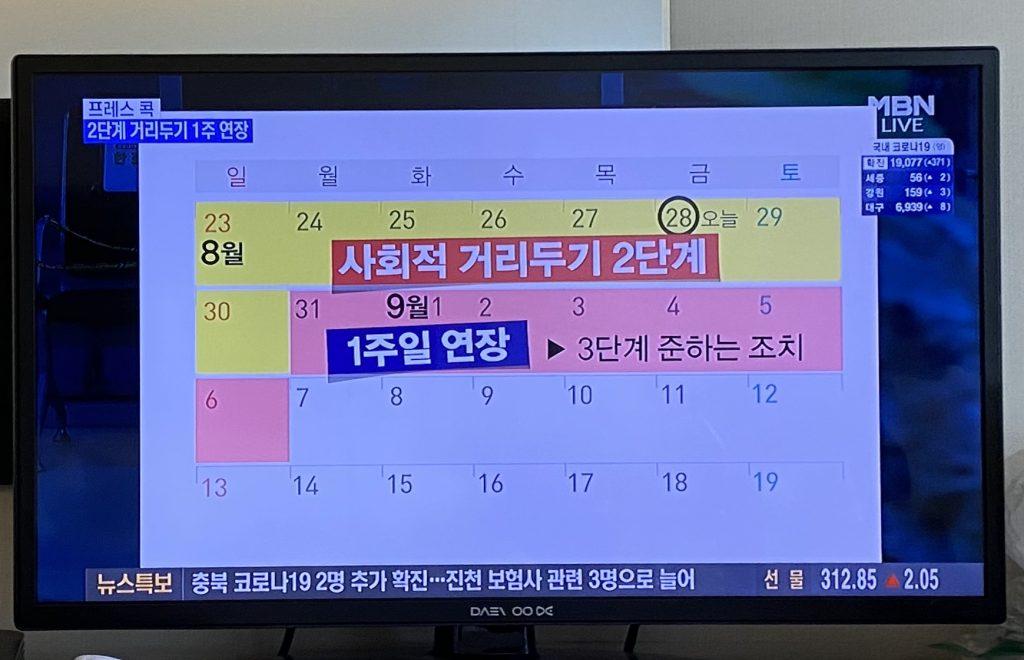 The number of cases, however, began to decline toward the end of my two weeks. The day before my release from quarantine, Aug. 30, the Seoul government increased the social distancing regulations to level two-and-a-half instead of fully enforcing the level three protocol.

This stricter government mandate meant food and beverage businesses in Seoul would have to close indoor services by 9 p.m. The government also prohibited certain franchises, such as Starbucks and Baskin Robbins, from providing dine-in services due to previous COVID-19 cases.

After being released from the 15 days of quarantine, I had the chance to experience the South Korean culture around COVID-19 at first hand. I was curious to see how the public would respond to the governmental regulations and whether the democratic government would either uphold or compromise the concerns of public health and personal privacy.

At Seoul Station — my first destination in South Korea outside of the quarantine process — I noticed everyone in the station was wearing a mask. South Korea implemented a “no mask, no ride” policy in May that required all public transit users to wear a face mask. It was 8 a.m., so the morning hustle to work made the station quite crowded, and people stood side by side on the escalator. Although people were clearly violating the six-feet social distancing regulation, I did not see a single person without a face mask.

Despite the increase in social distancing regulations, the city of Seoul remained bustling near public transportation areas. The metro system is widely utilized among Seoul locals, so the subways remained filled but much less packed than usual. 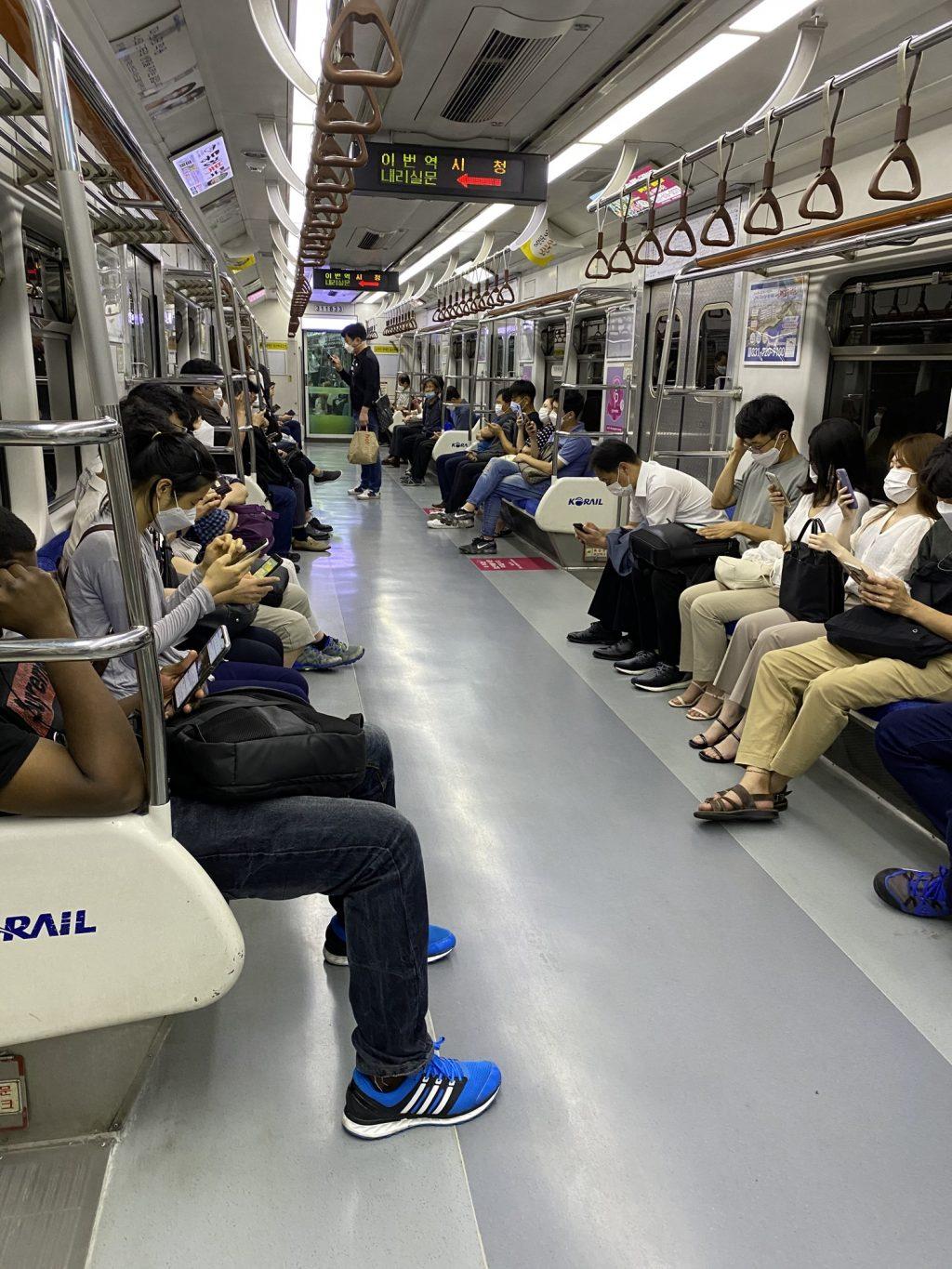 On Sept. 1, two days after the Seoul government raised COVID-19 regulations to level two-and-a-half, the subways remain crowded. Nearly everyone wore a mask while silently using their phones.

Nearly all street-side businesses followed a system for checking and keeping track of customers while still respecting the customers’ rights and privacy. Under government regulations, high-risk businesses would be required to conduct this tracking system. If a person wanted to order food, purchase an item or make any other exchange inside a facility, they needed to provide their health and personal information before entering. 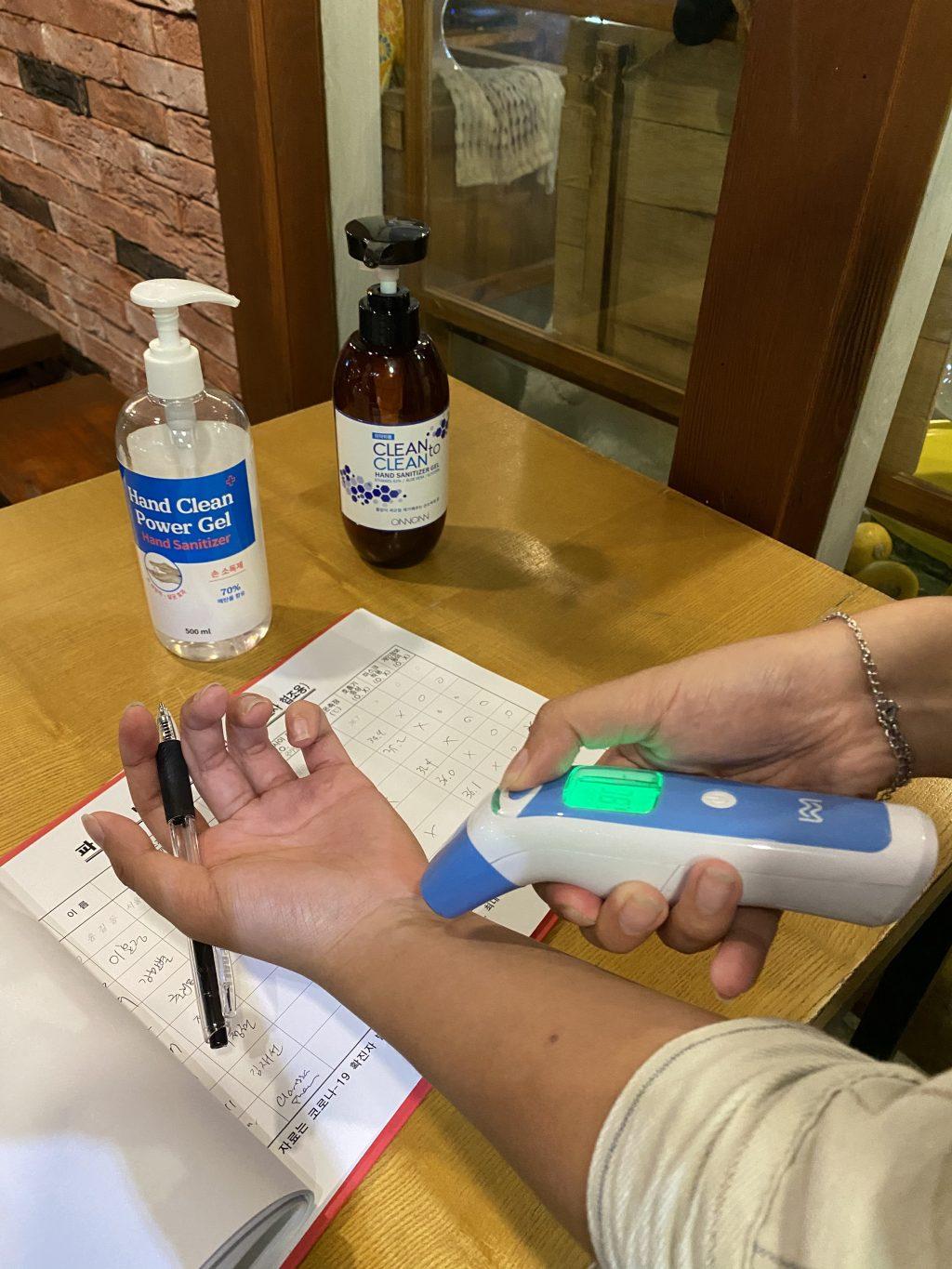 A customer uses the temperature scanner to check that her temperature is under 37.5 degrees celsius. Different facilities implemented varying degrees of the tracking policy, but most stores provided the basic items for customers to self-check and record.

Some of the stations provided a notebook, a pen and hand sanitizer. More secure stations included a temperature checking device, a COVID-19 QR code scanner and a staff member to ensure the entry procedure was followed. 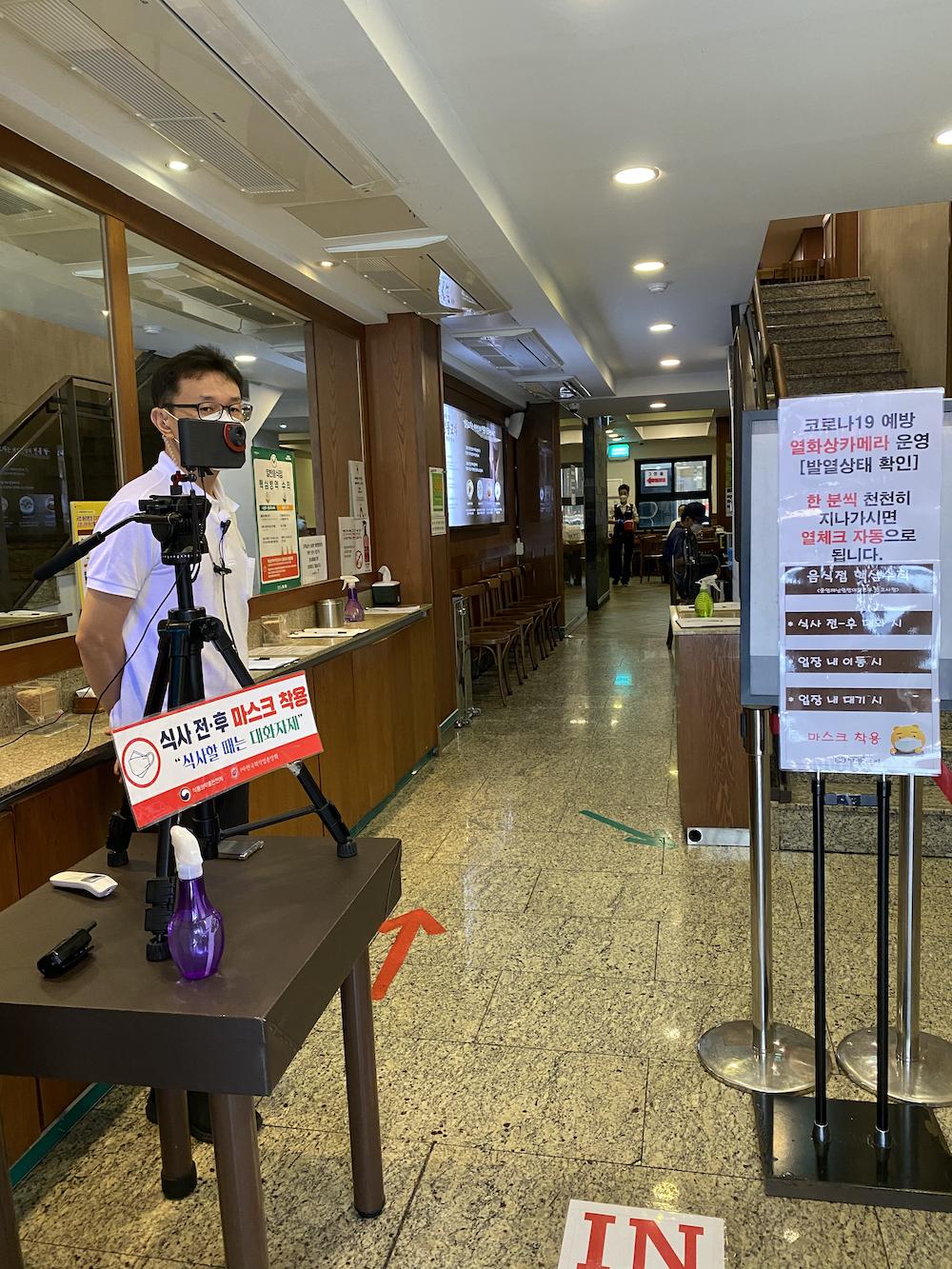 A popular Kalguksu restaurant in Myeong-dong, Seoul, has tighter entrance security. A staff member sprayed hand sanitizer on my hands before I entered the restaurant, and I was told to fill in my information on a clipboard once I was inside the building.

Not all stores followed this guideline. GS25 and Olive Young, both widespread chains in Seoul, did not require customers to fill out a form to enter and purchase an item. These stores, however, were quick stops where customers were in and out without much lingering.

My phone repeatedly buzzed throughout the day, notifying me of COVID-19 updates through an emergency alert system. Government officials sent real-time information to all devices through geolocation methods. On average, I received between 5 to 10 alerts each day regarding COVID-19 information from the Wireless Emergency Alerts system during my time in quarantine. By late September and early October, I occasionally received around one to four alerts per day.

The Wireless Emergency Alerts system notifies me every time there is a new COVID-related update. I received seven COVID-19 alerts in the span of six hours Aug. 23, and 10 total that day.

Reminders of wearing face masks and social distancing were present nearly everywhere in Seoul. Banners advising citizens to wear masks were visible throughout the city, on store windows and on public transportation. Whenever I tapped my transportation card to ride the subway, an automated female voice politely reminded me to make sure I was wearing my face mask. In department stores such as Daiso, the broadcasting system also reminded customers to keep their masks on at all times.

These pervasive public reminders fostered a social norm around wearing face masks. Wearing masks not only became a protective measure but also a social standard. If civilians did not wish to comply with COVID-19 policies, they had the freedom to not utilize public transportation and enter into most businesses. If civilians did wish to use such facilities, however, they needed to follow the protocols.

Various types of face masks were easily accessible in Seoul, as they were sold in convenience stores, on street stores and throughout subway kiosks for a dollar or two. 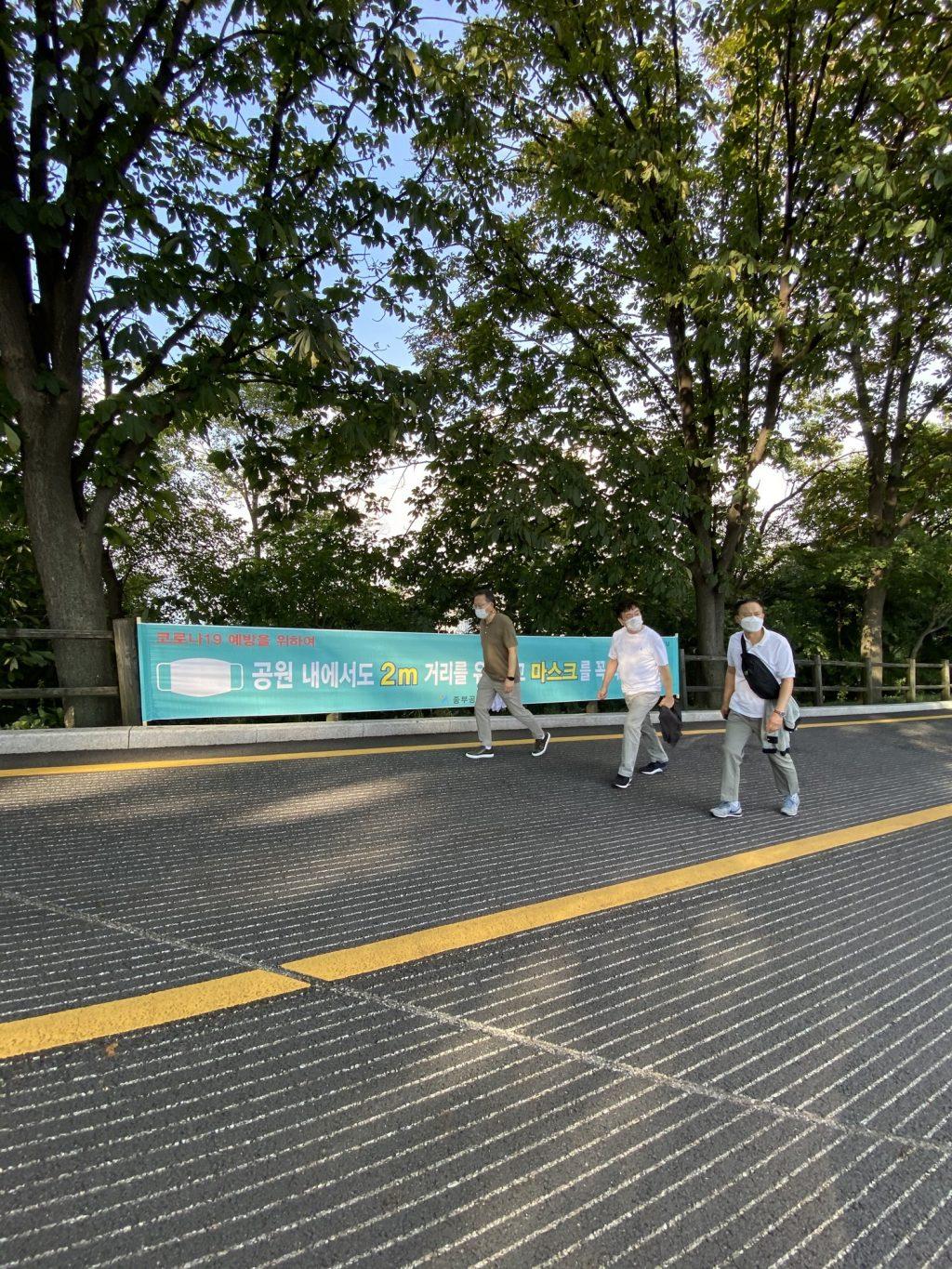 Three men wear masks while walking in front of a banner that reminds the public of the COVID-19 precautions. Similar forms of this banner were placed along both sides of the road with occasional hand sanitizers on small stools.

As a nation that has gone from having the most COVID-19 cases outside of mainland China, to one that was internationally applauded for its effective containment procedures, to one that is witnessing a second wave, South Korea has experienced a rollercoaster during the age of this pandemic.

I’ve personally witnessed a mixed culture regarding the individual enforcement of the rules. While civilians have worn their masks as a protective measure against the serious virus, government policies and social standards have played a fundamental role in shaping this culture of compliance. Through the policies and public efforts, COVID-19 cases declined and social distancing regulations were reduced back to level two Sept. 13. 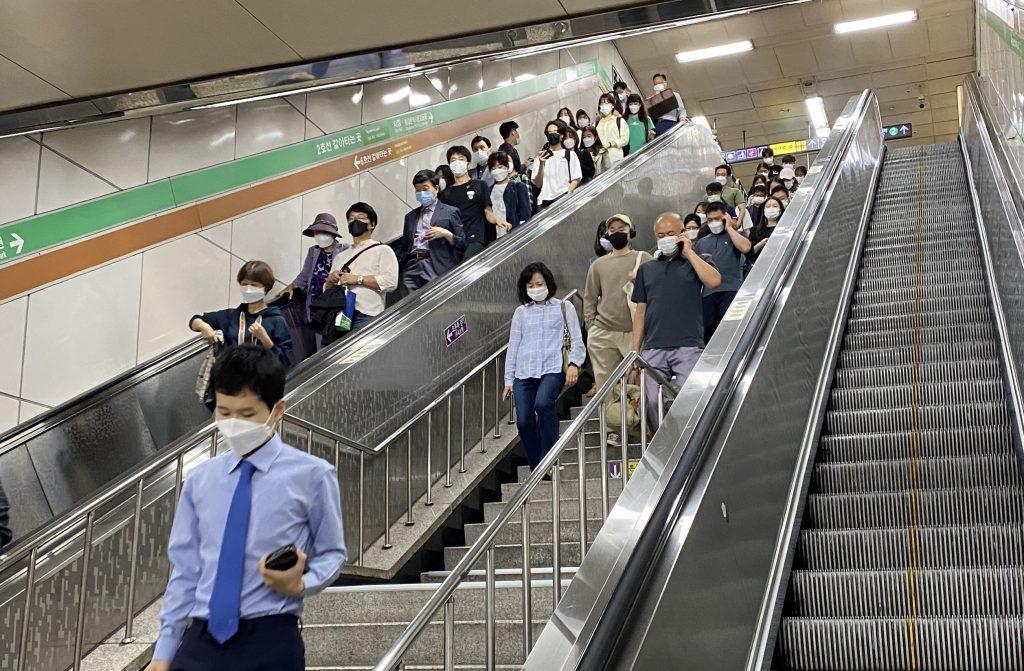 A crowd of public-transit users exit one subway and transfer to another subway line at Hapjeong Station. People continued to wear face masks Sept. 25, which was almost two weeks after the social distancing level was brought down.

With South Korea’s Chuseok holiday Oct. 1, both officials and civilians were concerned about the possible spike of COVID-19 cases. Chuseok, also known as Korean Thanksgiving Day, is a nation-wide holiday where extended families gather, perform rituals to their ancestors and feast on Korean dishes together. The government encouraged families to stay at home instead of reuniting with relatives in hopes of returning back to normal in the near future.

Although the COVID-19 cases jumped from 38 total daily cases to 113 on the first day of the three-day Chuseok celebration, the rate stayed below a hundred during the remaining two days.

Social distancing measures were lowered to level 1 on Oct. 12. There are no longer indoor and outdoor gathering limitations. For the greater Seoul region, however, some level two guidelines will still be kept. High-risk business, churches, and some schools have reopened with limited people capacities to maintain social distancing. 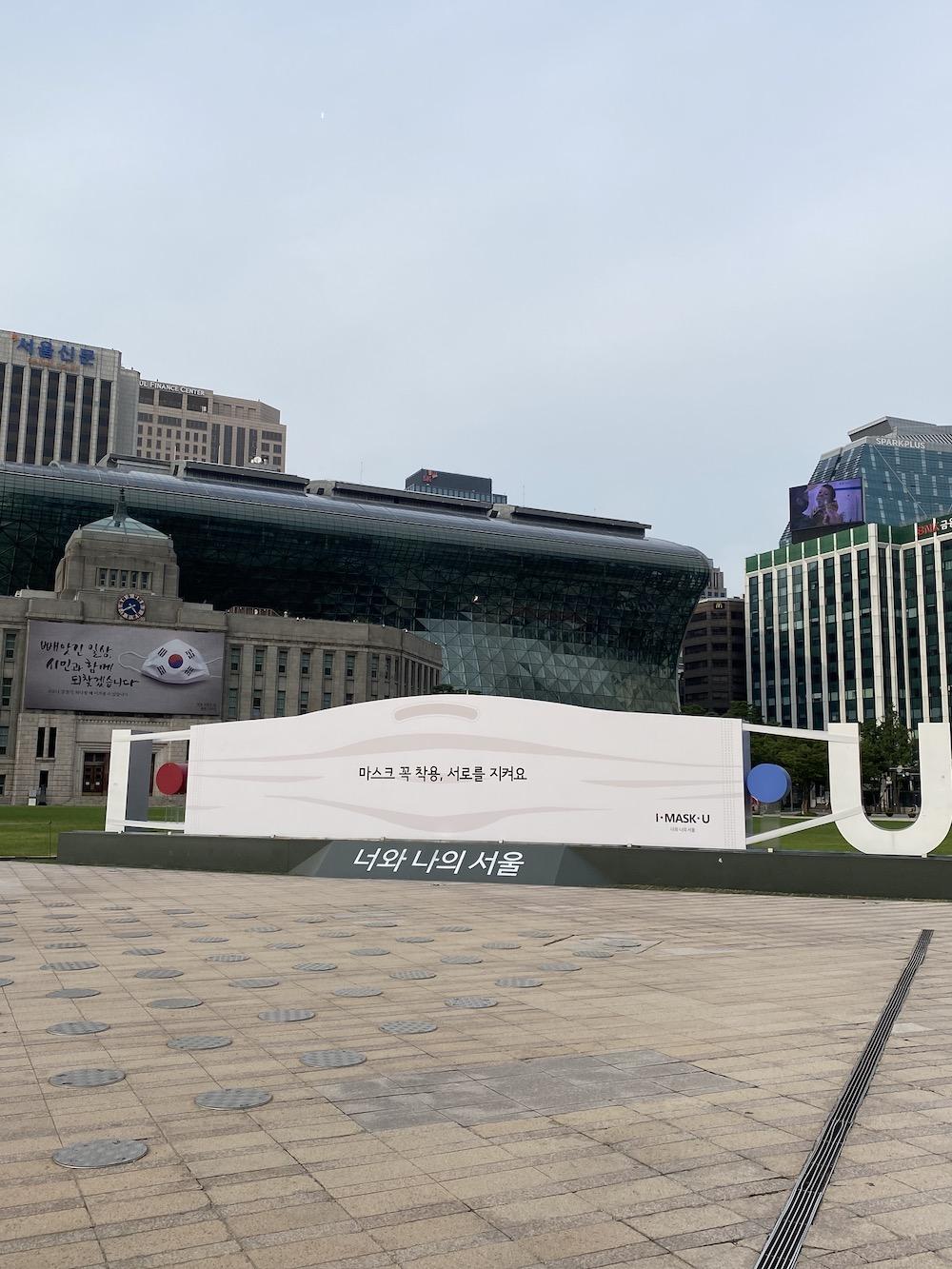 Face masks became a part of the visual and social lifestyle in Seoul where banners, posters, sculptures and recorded audio announcements remind citizens to wear face masks at all times when outside. A face mask sculpture is wrapped around the letters “I” and “U” in Seoul City Hall, where the word in between the two letters would typically read “Seoul.”

As of Oct. 13, South Korea has performed 2,428,771 COVID-19 tests with a feedback of 98.2% negative results. South Korea seems to be tackling the fight against COVID-19 relatively well since the peak of its second wave in mid-August, and signs of continued success are high.

Art Department Creates Ways to Connect with and View Art 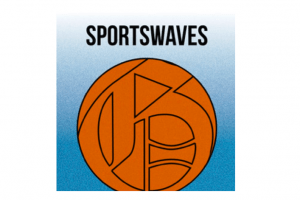 Via Apple Podcasts | Via SoundCloud | Via Spotify   Paxton and Karl weigh in on the Texans firing Bill O'Brien...
Copyright 2013 Jupiter Premium Magazine Theme
Back to top