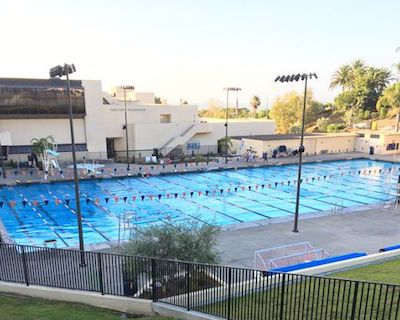 After a rough 2015 season, Pepperdine’s water polo team might be returning to their winning ways.

The Waves sport an 8-4 record, with their four losses coming against top-six ranked teams, including two to No. 1 UCLA. Those are not embarrassing defeats by any stretch. Besides, they defeated the No. 8 ranked UC Irvine 12-6, and their tough crosstown rival, Loyola Marymount, proving that Pepperdine certainly doesn’t roll over to a team just because they’re elite.

Head Coach Terry Schroeder has coached the Waves for 24 years, and has even led them to their lone NCAA national title in 1997, according to his bio on Pepperdine’s athletic website. He said that the victory against LMU was a promising sign for this team’s future.

“Beating LMU was big, you know, it’s a nice positive step in the right direction,” Schroeder said. “I really feel like this team has a lot more potential, though, we’re looking forward to growing and beating some of our other rivals, like Long Beach.”

One of the interesting factors going into the 2016 season is how the water polo team has rebounded from their hazing scandal last year. According to an expose from the Pepperdine Graphic, the team was investigated by Pepperdine’s administration due to many instances of hazing, including threatening to shave freshmens’ heads and making freshmen do the infamous “cinnamon challenge.” As a result, all upperclassmen players were suspended, and the Waves limped to the finish line with an 11-16 overall record, including a dismal 1-8 record against teams in their own conference.

Despite — or perhaps spurred — by this controversy, the Pepperdine water polo team has a completely new feel in 2016. Sophomore attacker Marko Asic said the players decided to make the team environment less out-of-control and more family-like.

“I think one of the main things we’ve been doing is getting to know each other as people, more than just teammates,” Asic said. “I think this really happened over summer, we really started hanging out more outside the pool, and that’s had a great effect on our morale. I think just getting to know each other outside the pool as good friends helped a lot.”

Junior goalie Zack Rhodes echoed Asic in his belief, saying the team’s strong opening is because of a rejuvenated team atmosphere.

Of course, it also helps the Waves that players such as Asic and Rhodes are also performing well in the pool. Asic is the driving offensive force for this squad, terrorizing opponents’ defenses with a team-leading 28 goals on the season, which is over 21 percent of all goals scored by Pepperdine during the year so far. It’s not just Asic who’s leading the offensive charge, either. In blowouts such as their 24-3 win against Chapman or the 26-4 victory vs. Claremont-Mudd-Scripps, many different players contributed to the goal total, making these victories a true team effort. In fact, for the CMS match, freshman Mate Toth led the team with five goals. As for Rhodes, his .761 save percentage is stellar, and helps keep the Waves strong on defense.

So now the question becomes, how far can Pepperdine ride this wave of success?

Sure, their record is strong, but most of their wins haven’t been against traditional water polo powerhouses. Rhodes is choosing to stay optimistic. He said the Waves might have a legitimate shot at the national title.

“To be honest, it’s hard to tell how strong we’ll be, but hopefully we can place in the top four or five, I definitely think we have the capability to go a long way with this team,” Rhodes said. “I think we can win our conference, so it’s just a matter of playing the games.”

Photo courtesy of Pepperdine “What shocked me the most was how Professor Jeff Schultz talked about how little of a place...
Copyright 2013 Jupiter Premium Magazine Theme
Back to top