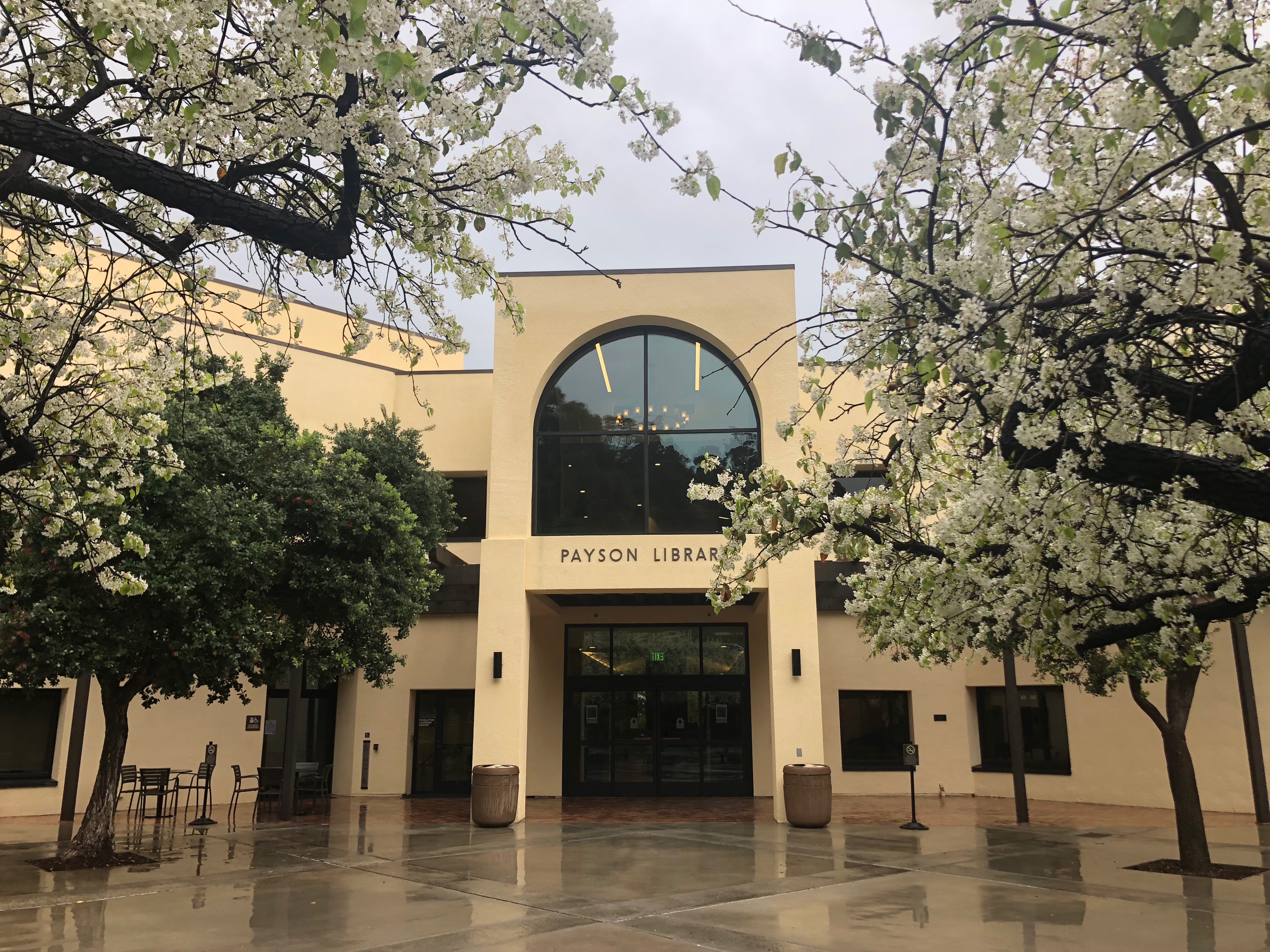 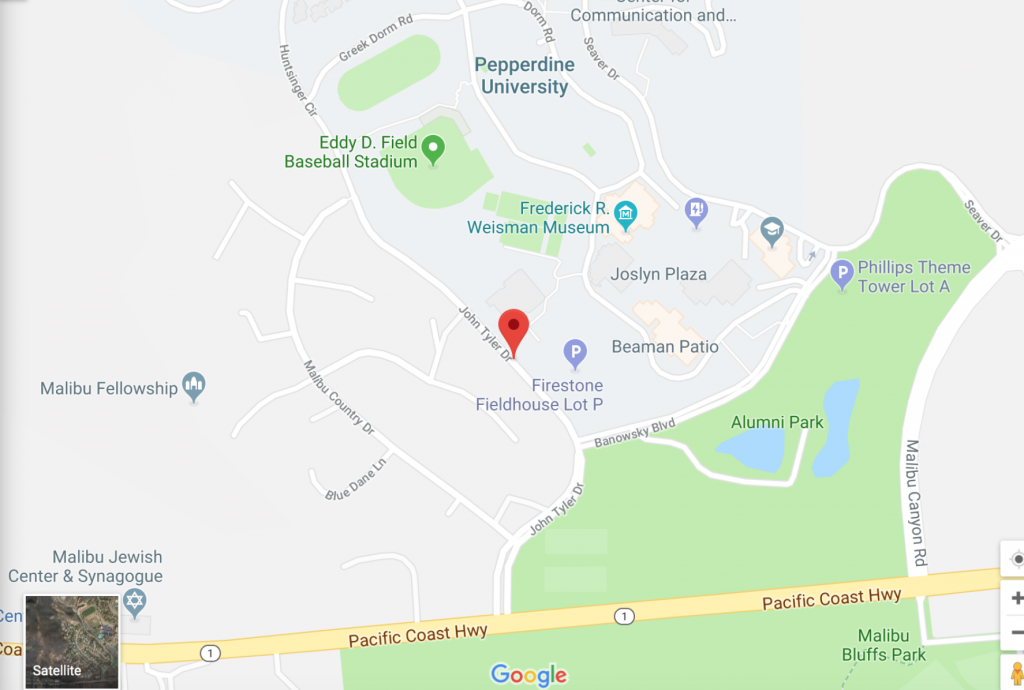 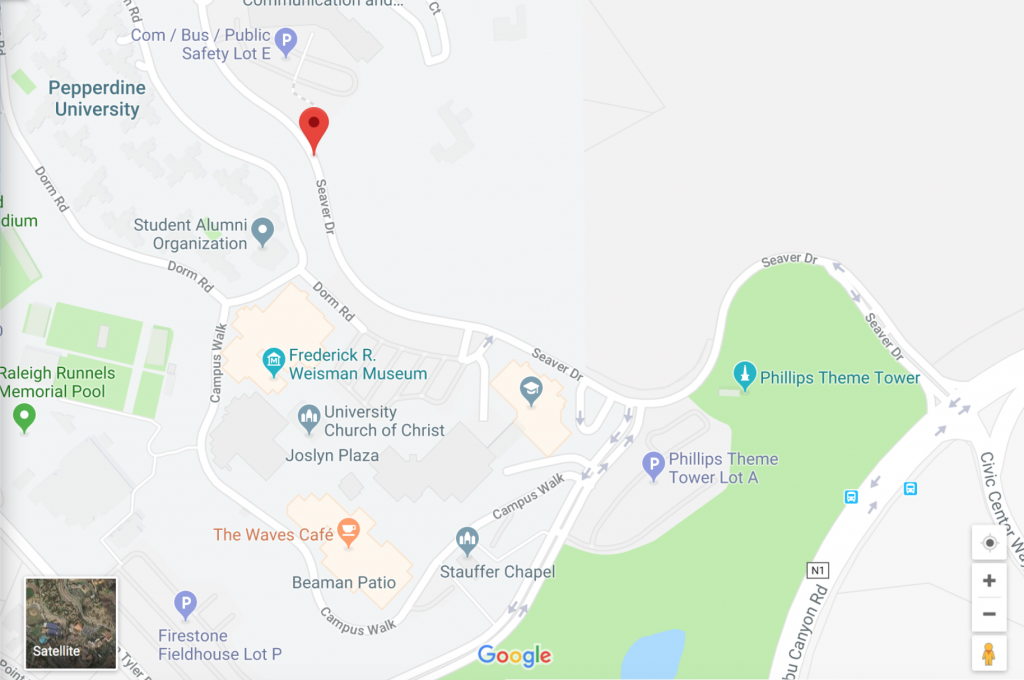 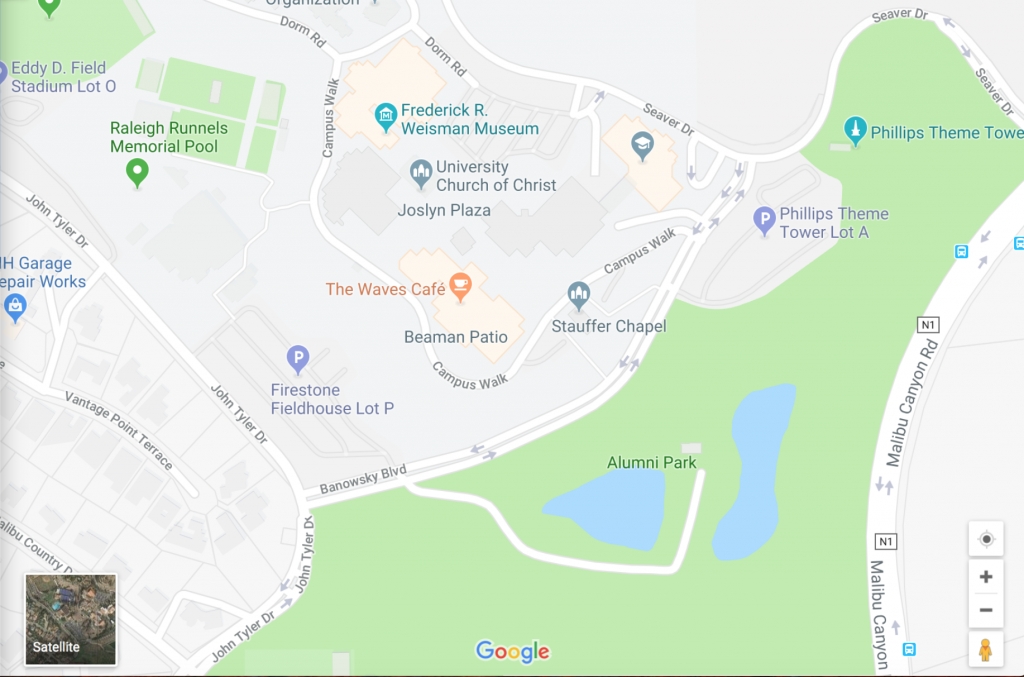 The Pepperdine University campus entrance booths stationed at John Tyler and Seaver Drive are familiar to anyone entering the school’s campus. However, outsiders’ ability to get onto campus – and what may be the ease with which the Department of Public Safety lets people in on campus – has students questioning their effectiveness

The entrance booths were added to the campus in the late 1980s, according to President Andrew K. Benton. They are staffed by the Department of Public Safety officers to promote a safe and secure campus.

“We did not want to close off our campus to the community, but we did want to be available for information and to have some sense of who was entering campus,” Benton wrote in an email. “I would say the task today is more important as the booths provide a useful control point, especially late into the night.” 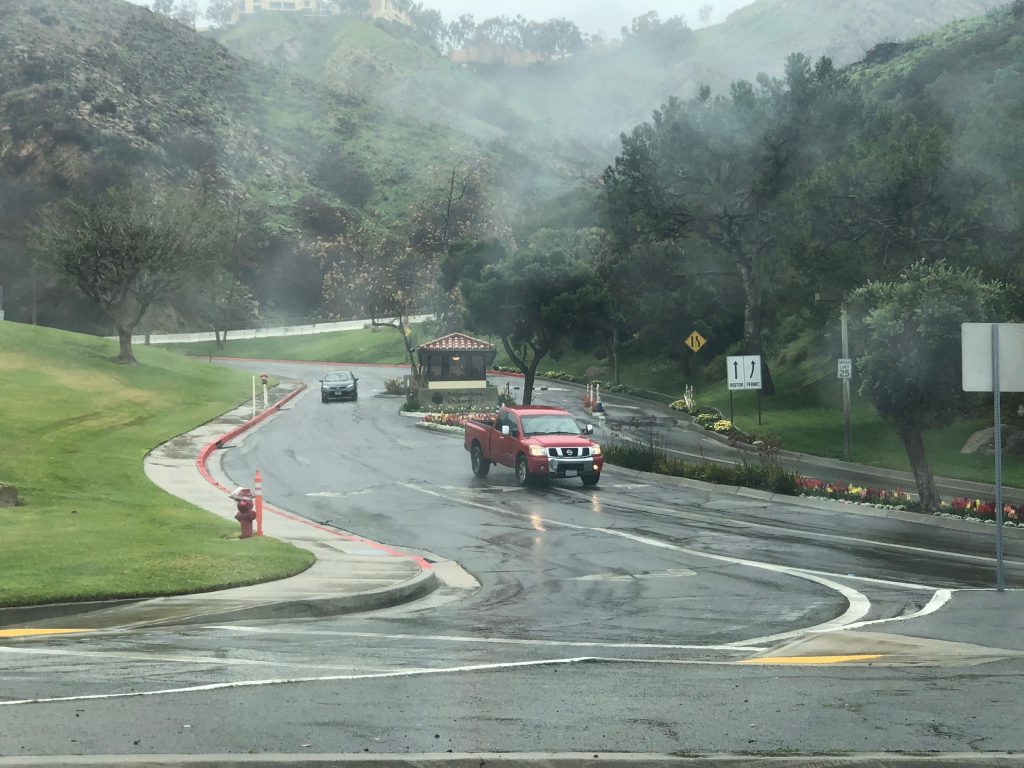 The Seaver Drive campus entrance booth is staffed and monitored 24/7. 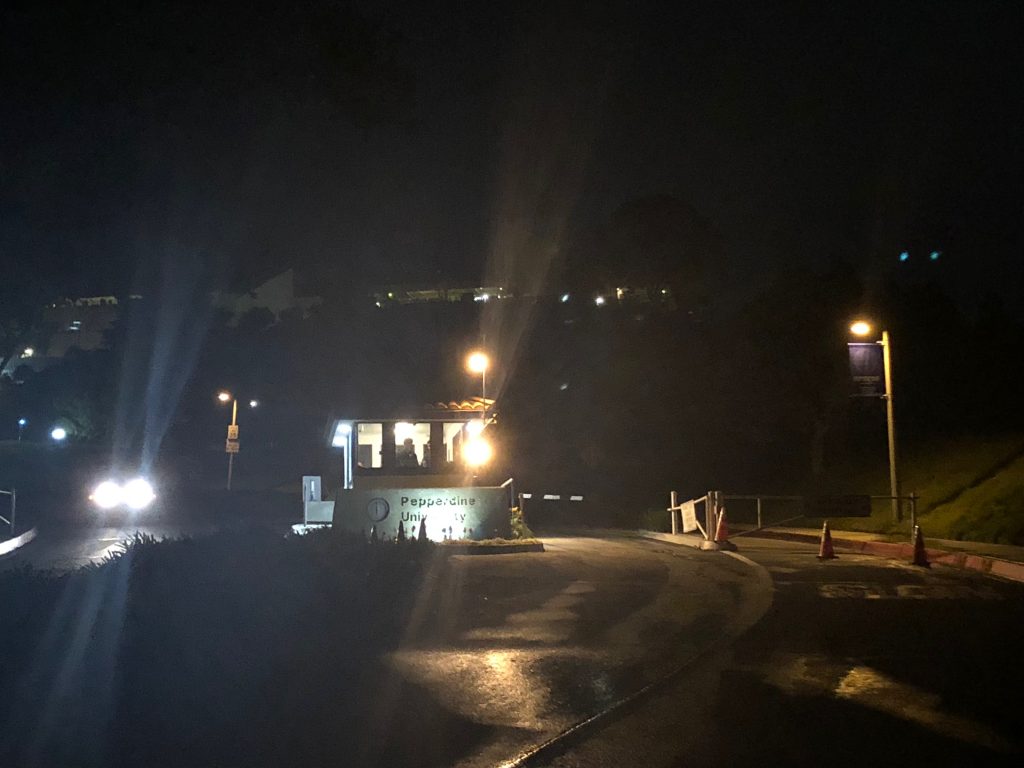 Dawn Emrich, director of Public Safety, wrote in an email that the booths are monitored 24/7, but when asked if they have helped deter crime, she said the question is a bit challenging to answer.

“Without a control group to measure if there would be a spike in crime without them, this question is difficult to answer,” Emrich wrote. “In general, having traffic pass through a control point on camera hopefully does deter individuals from coming on campus to commit crimes.”

Emrich wrote that during the day, the entrance booths are for more informational purposes rather than for security.

“Unless something is amiss, such as a drunk driver or other safety concern, visitors are welcome,” Emrich wrote. “At night, vehicles need a campus permit, ID card or verifiable business/authorization to gain access to campus.” 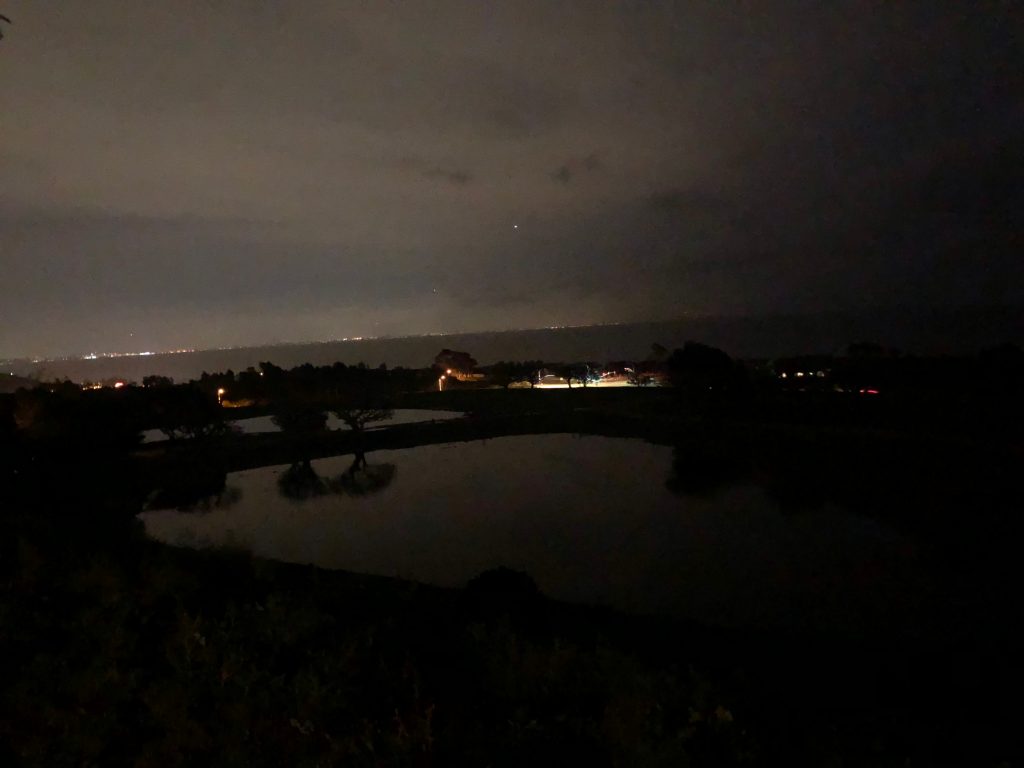 A nighttime shot of Alumni Park, a space on campus that is accessible for the general public.

While the two campus entrance booths monitor people coming in from the two main University entrances (John Tyler and Seaver Drive), Alumni Park is an area of campus that is widely accessible to the public.

“Public Safety officers routinely patrol the campus, including the Park,” Emrich wrote. “We are also fortunate to be a campus community that looks out for one another, so it’s not uncommon for Public Safety to receive reports if there is a concern.” 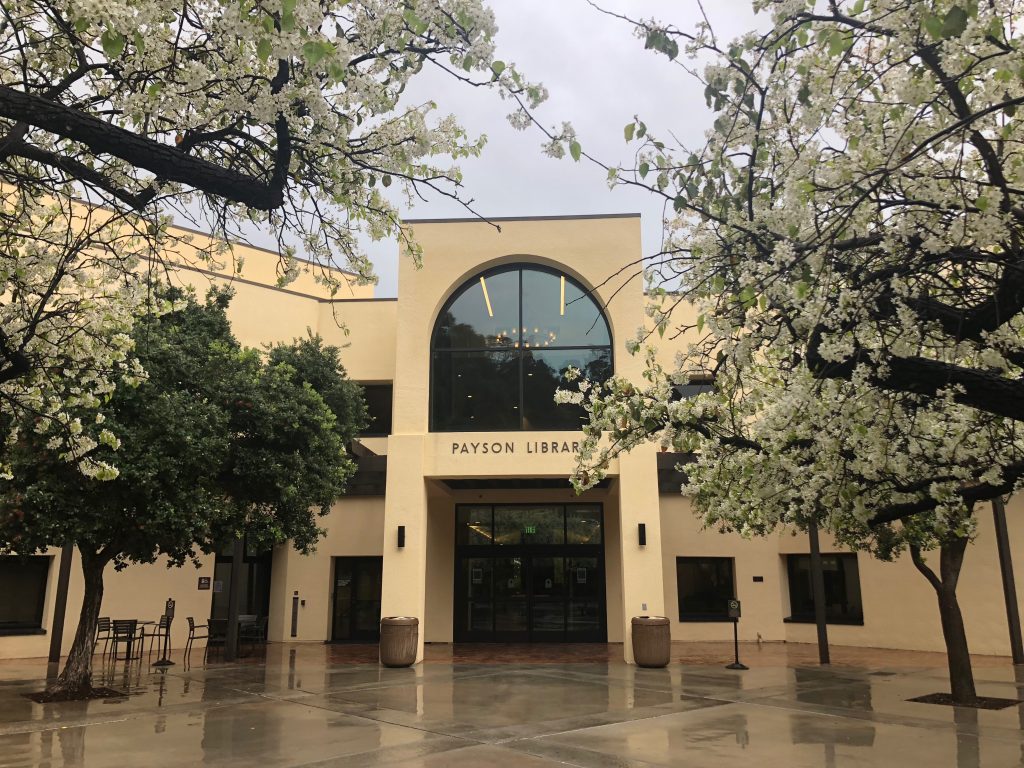 Cathie Schuman, the daytime circulation supervisor at Payson Library, said there had been a few instances in the past where suspicious individuals have entered the library.

Schuman said the general public can come in and use the library, though they are not permitted to use the computers or to check out books. However, Crest Associates, who financially support the University, and Friends of the Library, who pay a yearly amount to the University, can come into the library and have full access to all the facilities.

Schuman could not recall the last time a suspicious individual came into the library, but she was able to recount an instance from a few years ago, noting that DPS has always been swift and quick in their response.

The library is frequently a place where students leave their belongings unattended, laptops, phones other electronics and books strewn across the tables, sometimes for several hours.

Schuman said she would not recommend students leave their belongings, particularly their laptops, unattended, but did note that the library has an itemized lost and found where students have turned in keys, AirPods, phones, Hydro Flasks, and other items left behind. 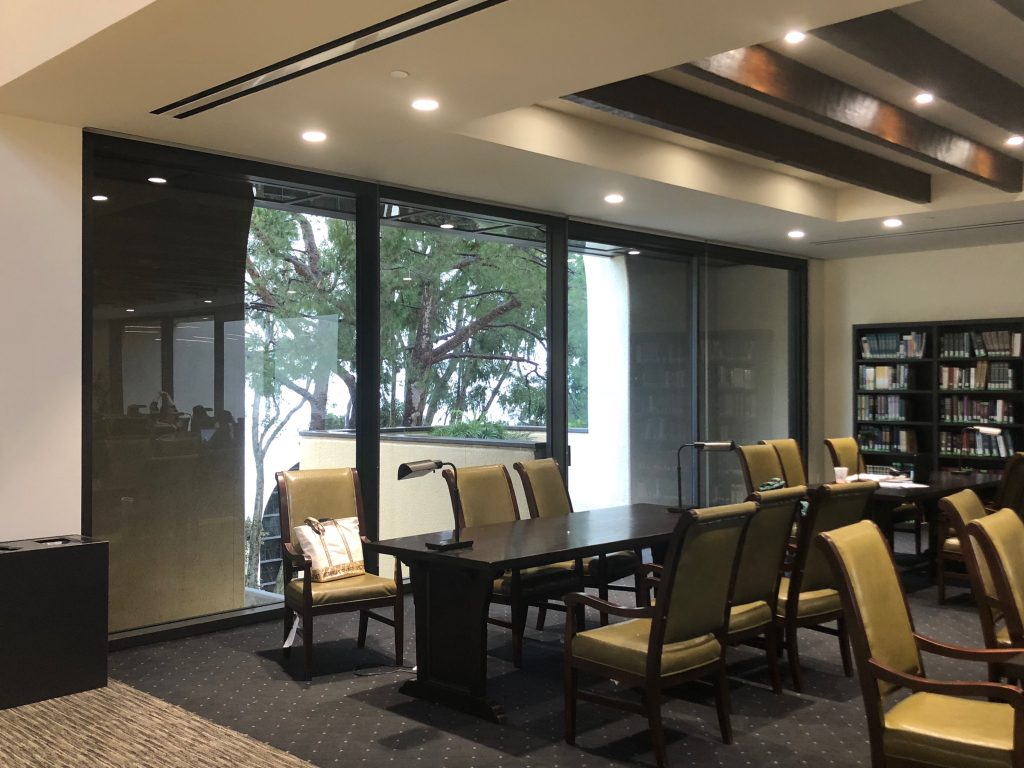 An abandoned tote bag and a computer, backpack and books in the distance are some of the items students leave at the library unattended, sometimes for several hours.

“It’s at your own discretion,” Schuman said. “I don’t think in general people steal here, and a lot of times people will turn in items. I feel like it’s pretty safe to leave your stuff.”

The DPS crime log for the 60 days from Jan. 24 to March 24 had 11 instances of theft of the 57 cases reported, with one case occurring in Payson Library. However, it was not indicated whether the perpetrators were students in any of the circumstances. 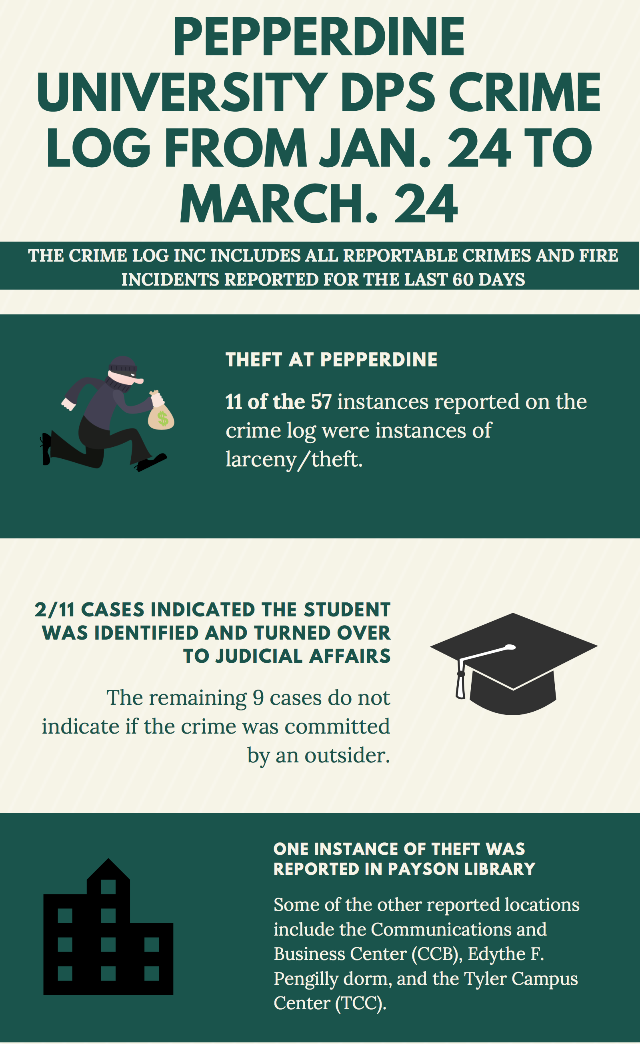 “I feel like it’s such a walk to get to campus, we’re not near anything, and whenever we Lyft anywhere we have to wait at least 15 minutes for the Lyft to get here,” Duffield said. “We aren’t a convenient location for anyone to get to. The library is an environment where everyone is 18 to 22 years old, and you would really stand out, more so than at a community or public library. You would be really obvious, and I feel like that would be a self-conscious experience among all these 18 to 22-year-olds wearing Gucci.”

Junior Christina Stratton, however, said she saw a man who appeared to be homeless last semester late at night lying on the couches.

“At first I felt selfish for feeling uncomfortable, but I realized the library is a place where a lot of young girls are by themselves, and we all seem to get really comfortable lying around the couches and studying,” Stratton said.

Stratton said this experience has made her second guess her decision to leave her laptop and other items unattended in the library.

“It’s Malibu, most people generally feel pretty safe, and we trust each other, it’s a small community,” Stratton said. “But when you do take a step back, it is a little odd that at a university we would feel comfortable leaving our laptops and belongings unsupervised.”

Stratton said she was not sure if DPS has contributed to her sense of security on campus, but did note that since this event, she has re-evaluated some of her decisions about campus safety.

There are no links between homeless individuals on campus and stolen or lost items.

Senior Megan Manquen said she does feel safe and secure with DPS, recounting an instance where DPS had her pull up her Wavenet account to get through the security booths when she did not have her ID card.

Religion Prof. Ron Highfield said at the beginning of the fall semester, a man came into his office – a man he later recognized to have been his student three to four years ago.

“He looked disturbed, and at some point, he asked me if he could close the door [to my office],” Highfield said. “I agreed because he seemed pretty agitated, and then he began to tell me a story about how when he was in my class he was an atheist, and he’s now had this dramatic religious experience.”

Highfield said it was clear the man was disturbed and agitated, and he began to read from a “manifesto” of sorts. Highfield said the man was standing between him and the door and was carrying a backpack with a tennis racket.

“I’m beginning to think, ‘I wonder what else does he have in that backpack?’” Highfield said.

Highfield said he remained empathetic toward the individual and received a call from the Religion and Philosophy Division office asking if he was OK and saying that they would call DPS. Another professor had alerted the office of the man because they sensed something was suspect. Like Schuman’s experience with the suspicious individual in the library, Highfield said the response from DPS was quick, arriving at his door within a few minutes to escort the man outside.

Highfield said he is not sure how the man got on campus, adding that even if he did not have a car, he could have accessed the University without going through the security gates and coming in through Alumni Park.

“This young man was an alumnus,” Highfield said. “He wouldn’t have looked alarming. He was well-groomed. Being an alumnus, he could have had business on campus, and I don’t see anything they [DPS] could do except maybe do a more thorough interview [at the campus entrance booths], but that doesn’t seem very practical.”

Highfield said he is not sure how DPS should handle these situations, considering the accessibility of campus and the ability for outside individuals to circumvent the security gates. However, Highfield said he was pleased with how DPS handled the incident.

Emily Tencer contributed to this reporting