‘A king without a kingdom’ 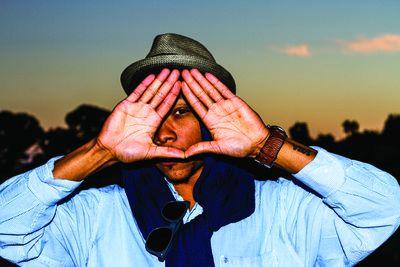 Aaron Lewis was arrested on campus on last Monday for weapons possession on university grounds. A few hours after being released from the Malibu/Lost Hills Sheriff’s station at around 7 p.m., Lewis went home. He lay down near some bushes in a nearby park and dozed off.

He was taken into custody Nov. 4 when DPS officers and L.A. County Sheriff’s deputies found two knives in his possession. According to California law, carrying a blade longer than 2 1/2 inches at a private university is a felony.

Lewis — or ALFA, as he likes to call himself — is homeless. According to Lewis, ALFA, which is his “godly name,” stands for “Aaron Lewis Feeling Alive.” He has been living in Malibu for two weeks after sojourning through Venice.

His bank account balance is $10.53. To feed himself, he has been living off cold cans of soup and recently acquired bread, corn chips and peanut butter and jelly, courtesy of Assistant Professor of Religion Raymond Carr. “For someone that’s homeless, those are staples. You don’t need to refrigerate it. He needs to have things if stuff gets tough,” Carr said.

On the day of his most recent arrest, Lewis said he was on campus to meet Carr to show him some family heirlooms and the 2009 police report in which he was allegedly framed for aggravated assault with a deadly weapon on a police officer.

The heirlooms? The two knives that got him arrested. Lewis said that the larger of the two, whose origin is Ethiopian, has been in his family for many generations. Carr wasn’t aware of Lewis’ visit. “He didn’t go through the proper procedures,” Carr said. “He didn’t tell me he was coming.”

Lewis first met Carr outside the Starbucks in Malibu Colony a few days before the arrest. He was sitting down behind two students who giggled as Carr strolled by.

Lewis, who labels himself as an “everybody guy,” said he felt Carr’s energy, that he had a “light that beamed.” After Lewis introduced himself, Carr gave Lewis his business card. Lewis accepted it since Carr “seemed like the only person around which he could let his guard down.”

Carr said they had a very brief conversation but one in which he learned that “both of us came from African-American communities that are somewhat impoverished.” After their first encounter, they bumped into each other a couple other times, and Lewis insisted on telling Carr his story.

On the Monday of the arrest, he woke up in the park and came to Pepperdine. He walked up through the hills outside campus and set foot inside the bookstore. After a few minutes, he ate lunch in the Caf and then returned to the bookstore to charge his smartphone, from which he called Carr.

Lewis left him a voicemail: “Ray, man, it’s ALFA, the guy from Miami. I’m here on the Pepperdine campus — call me. I’d like to sit down, have an audience and talk to you. I think maybe you’re someone I could talk to about something. So call me. I’ll talk to you later. Peace. Call me.”

Carr would only receive the message after Lewis had been apprehended. Carr said he understands why Lewis broke the law. “The law doesn’t allow room for people’s [like ALFA’s] needs to be met easily,” he said. “He’s decisive, assertive. When we’re being assertive, the rules don’t fit our agenda.”

Lewis is a homeless man with a smartphone, a watch and respectable clothes. On the day he was arrested, for instance, he wore a red squared flannel shirt, a scarf and hiking boots.

On the day of the arrest, Lewis asked a student where to find Carr and left for Elkins auditorium, where Carr spends much of his time. After a couple unfruitful minutes inside the building, Lewis stepped out to find a Department of Public Safety officer asking him to show his student ID.

Lewis explained the reason for his visit and even showed the officers Carr’s business card. As he was leaving the scene with just a warning, he was asked if he had any weapons in his possession. Lewis voluntarily revealed one of his two daggers, both of them inside their sheaths.

Just a few moments later, Lewis was being put into the back of a sheriff’s patrol car. “ALFA is very prideful,” Carr said, which is why he was surprised to see Lewis crying when he was being arrested.

Carr also said he was surprised that Lewis was homeless. “I didn’t know he was homeless until he was crying in the back of the police car. He thought he had gotten me into trouble. It broke my heart.”

Right before his arrest, Lewis asked Carr to pick up his clothes, which he stashed in the park where he sleeps. Carr agreed and went to pick up the bags of clothes, one of which held an aloe plant that Lewis uses as a sun tan lotion.

Lewis was then transported to the Malibu/Lost Hills Sheriff’s station. While in custody, Lewis contacted Carr, who showed up at the station and invited him to dinner at Domino’s Pizza before dropping him off at his temporary home. 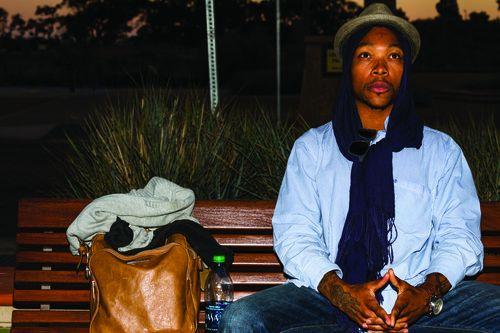 “It’s about the nature of my own beasts; it’s about God,” he said.

Aaron Lewis was born in Lake City, Fla. on April 29, 1981. A few years later, Lewis and his family moved to Liberty City, a neighborhood in Miami known for its high crime rate. According to Onboard Informatics, Liberty City has a crime rate three times higher than the rest of the U.S.

Lewis was in and out of jail since he was 15 years old, with most of his crimes being related to fighting, which he deemed essential. Lewis is 5-foot-9, and with most of his friends measuring in at more than six feet, he had to learn how to fight to survive. During that time, Lewis said he worshiped women, drugs and violence. He was in a dark place.

It was then that Lewis became ALFA. He started to be “enlightened by life and death at the same time.” He started seeing friends die from the poor choices they had made. He wanted to be an example for them. He wanted to make himself a light all his friends could follow.

“Slowly but surely I’d found faith,” he said. “But I didn’t know what kind of faith that really was. I was raised with a sense of being better, being amazing, being a leader no matter what.”

The road to become that person started when he was 22, when Lewis decided he wanted to be a truck driver. He felt intrigued by the profession and one day decided to leave his family and hitchhike from Miami to Arizona.

Truckers took him from the Sunshine State to the Grand Canyon State where he got his trucking license. From the age of 22 to 25, he drove big rigs — another term for a semi-trailer truck — across the country. Lewis said it felt fulfilling. “I saw the United States and realized that there was a world many people don’t see,” he said. “I fell in love.”

The next place that formed part of his love affair with America was California. In 2005, Lewis landed a trucking job in Pomona, Calif. He then moved to Frazier Park, Calif. and got involved in the movie industry with Paskal Lighting. For the next three years, he loaded and unloaded equipment onto movie sets.

Then, in 2009, Lewis lost his job. He didn’t join the American Trucking Associations in time to avoid the pitfalls of the U.S. financial crisis. When he flew home to visit his family for his birthday, his entire life changed.

On April 29, Lewis was meeting up with some friends at Las Olas Boulevard, a dining and shopping complex in Ft. Lauderdale. After trying to defuse a verbal altercation between his friend and a patron of one of the businesses, he was attacked from behind.

Lewis’ face was smashed into a wall, chipping one of his front teeth, which is still visible today. He responded by striking back at the male figure that attacked him. Turns out it was a policeman. Lewis was taken to prison.

Lewis faced 10 years in prison. He said he was afraid but was not going to give up without a fight, which is why he took his case to trial for two years, from 2009 to 2011. The jury found him guilty. “This is when faith changed me,” he said. “I was never caught up in any religious figure like Jesus Christ, but the spirituality came.”

The judge overhearing his trial granted him a second opportunity due to good attendance to court and sent him to the Broward County Detention Center where he spent seven months and three weeks, from April 15 to Dec. 7. It’s unclear why he was released or if he’s facing charges at the moment.

When he was released, Lewis had no money. He had spent every cent on his private attorney, claiming if public defenders — or “pretenders,” as he called them — had taken his case, he would be in jail right now.

Lewis then got on a plane back to California. Ever since then, he has been “on the grind” trying to survive. He got his trucking license suspended because of the criminal charges, so he hasn’t been able to get a job.

Lewis arrived in Venice, staying with different people for rent money. About two weeks ago, he moved to Malibu. He is currently living in an undisclosed park, where he stashes his clothes near bushes whenever he needs to leave his “bed.”

Lewis feels like a “reincarnated king” and said that to get his kingdom back, he needs to continue to maintain his spirituality. He even compared himself to Moses, the religious leader. “I came from nothing,” he said. “I was almost killed. I had a divine intervention.”

Lewis said he is showing the prosperity of his spirit without the need to have anything material. “I have earned a divine favor and divine grace to get out of my current situation,” he said

Even though he doesn’t have a permanent home and struggles financially, Lewis is a prideful man. “I don’t want anybody feeling sorry for me. I want people to know they are looking at a king with no kingdom.” 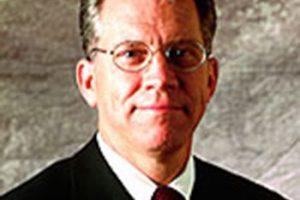 Since Provost Darryl Tippens announced his retirement, administrators have been searching for a qualified individual to fill...
Copyright 2013 Jupiter Premium Magazine Theme
Back to top